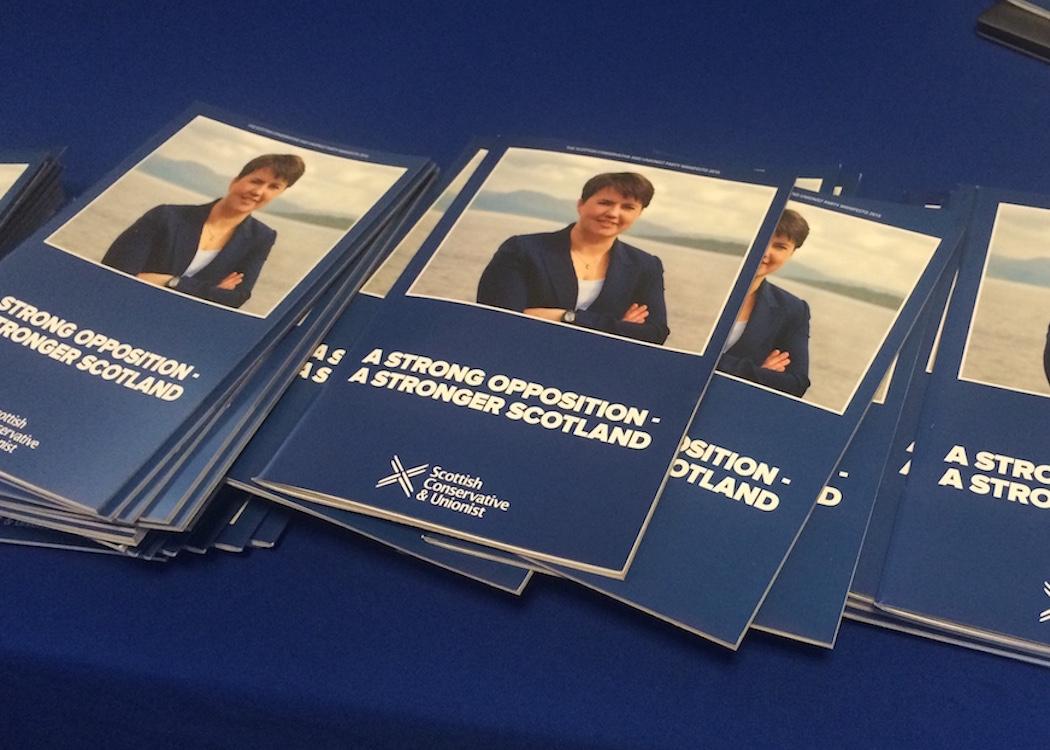 THE SCOTTISH CONSERVATIVE ‘manifesto for opposition’ was launched in Glasgow with a focus on housing, mental health and low taxes.

Hovering at 15 per cent in the polls, both in constituency and list predictions, and with a new survey having placed leader Ruth Davidson higher in approval ratings than Labour’s Kezia Dugdale, the Scottish Conservative manifesto launch had an optimistic air.

Pledging to take on the ‘centralising’ SNP and replace the ‘rump’ of Labour as opposition, Davidson also promised a new, positive campaign to promote the union between Scotland and England in the face of calls for a second referendum.

So what’s in the manifesto?

The topic which has so far dominated the Holyrood election debate, income tax, is one on which the Scottish Conservatives unsurprisingly depart from the SNP and Labour.

Davidson said she wants to “challenge the assumption that people want the state to take ever more money out of their pocket” and the manifesto proposes income tax rate equal to or lower than the UK’s.

Council tax should be eventually replaced by a local tax, the manifesto states. The council tax freeze should end, though increases should only be placed on the highest bands.

2) No to Named Person

Receiving a big cheer at the manifesto speech for this point, Davidson promised to “ratchet up” pressure on the Scottish Government when in opposition to see off the Named Person legislation.

The manifesto cites “philosophical objections” to the scheme – which would see a single guardian assigned to every Scottish child – as well as claiming the costs would be in the millions. An alternative scheme of “tailored support” for “families with complex needs” is outlined in the manifesto.

Read More: The case for and against #NamedPerson

Claiming that the legislation, due to roll out in August, has “lost public confidence”, Davidson said she was confident of “winning ground” on the issue in the months to come.

There was little discussion of the Conservative chancellor’s benefits cuts at the launch. Instead there was a focus on the newly devolved powers.

The manifesto states: “Blaming UK governments is no longer the go-to answer – we can take a different path in Scotland if we choose to”.

They want a “flexible, responsive, personalised welfare system”, support the SNP in aligning Carer’s Allowance with Jobseeker’s Allowance, but are vague about disability benefits, saying “we should explore” integrating disability payments.

Citing the recent Land Reform Bill as legislation that was rushed due to “lazy government”, the party commits to “stand up against measures that undermine individual property rights”.

The bill aimed to address the extreme concentration of land ownership in Scotland but was consistently opposed by the Conservatives and the landowners’ lobby on grounds of private rights .

The Conservatives say they support measures around transparency of ownership, including a timely mention of tax avoidance, but say they would reintroduce the tax reliefs enjoyed by sporting estates until recently.

Tenant farmer right-to-buy, proposed by the land reform review group, has been vehemently opposed by the Scottish Conservatives and this policy is laid out in the manifesto. It states that “even the consideration” of the scheme “is preventing new land being made available for tenancies”.

It wouldn’t be a manifesto launch without a big round housebuilding target, and the Scottish Conservatives’ is 100,000 during the next Parliament. Around half of these would be ‘affordable’, but as that generally means ‘mid-market’ it’s not clear who would be able to afford them. There was no mention of council house construction. It is still party policy to reintroduce the right-to-buy policy in Scotland.

In response to recent news that 1.5m Scots live in “unhealthily cold homes”, a specific commitment is included in the manifesto to increase Scottish Government spending on home insulation to the tune of PS1bn.

The predominance of damp and cold housing within the lucrative private rented sector (61% in England, for instance) and landlords’ responsibility for such conditions, is not mentioned.

Ruth Davidson’s speech highlighted the “staggering” figure of one in four Scots experiencing mental health problems, and said her party would push for a PS300m investment in capacity and staffing in mental health provision.

Another more controversial policy is the reintroduction of prescription charges at around PS8 per item.

Admitting that her party’s role in the 2014 referendum debate was “too often simply a matter of picking at the flaws of independence” and “rubbishing projections” , Davidson said it was now necessary to create a positive case for the Union.

A “new UK-wide effort to promote the strength and values of the Union” is included in the manifesto, but we await further details as to whether this will be as tank-heavy as last time.

Rubbishing Labour as a “rump” party, the Scottish Conservatives are framing themselves as the only people able to stand up to the “threat” of a second referendum.