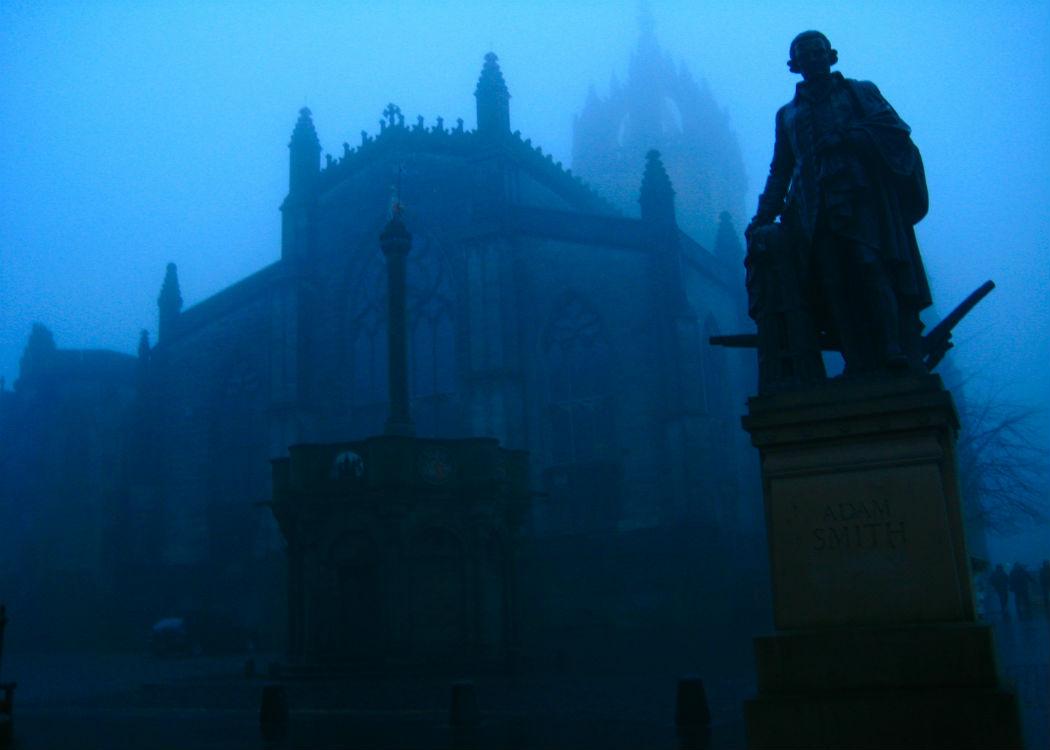 It’s not just a view he reserves for the Conservative and Unionist party, which is the mainstay of the right in Scottish politics, but the Scottish right movement in general.

“The right has hobbled itself because it’s fragmented,” he says.

“The Scottish Conservatives have crashed and diminished.” Michael Fry

“There was a time when the right was heavily concentrated within the Conservative party, and tensions existed within it between ‘one nation’ conservatives and libertarians. But those tensions are easy to bear when you have a large party. But the party has crashed and diminished.”

It’s a view that’s left him with little hope for the Scottish right under current constitutional circumstances, and as an outspoken supporter of Scottish independence, outside the Conservative party itself.

It’s the opposite image to that presented by Professor Adam Tomkins, a constitutional expert and self-described convert from the left of the political spectrum to the right, who is standing for the Glasgow region for the Holyrood Parliament.

“The Scottish Conservative party is more relevant in Scottish politics than it has been for a very long time,” he contests.

“Ruth [Davidson] has been admirably clear in her targets. We are looking to the best ever election for the party since devolution.”

Fry and Tomkins are two of Scotland’s most influential rightwing intellectuals, with strongly opposed analyses of the prospects of the right in Scotland. Which is closer to the truth?

It’s an argument that has been thrown into sharp focus by widespread speculation that the Conservatives are poised to overtake Labour as Scotland’s largest opposition to the SNP after the May Scottish elections.

Scottish Labour’s ongoing agonies, which have been continuous at a higher or lower pitch since the party lost the 2007 Scottish elections, seem to have no end. Recent polling has shown that the Conservatives are cornering the vital market in elderly voters, with only one in five currently polling to support Labour.

A shock YouGov poll in early March placed the Scottish Conservatives at 20 per cent of vote share in both the constituencies and regional list seats, just a toe ahead of Labour at 19 per cent and 20 per cent respectively.

Then again, the travails of the Scottish Conservatives are also long and pained. A widespread perception in recent decades that the centre right has lost out to the centre left in Scottish politics is backed up by hard numbers.

“Uncompromising unionism with a centralised state is not a coherent part of conservatism.” Michael Fry

In the 1955 General Election the party took just over half of all votes cast, making its popular appeal comparable with the modern SNP. In the 2015 election, Prime Minister David Cameron was able to boast, incredibly, to young supporters that “our vote actually held up” in the wake of the SNP landslide. In fact, the Scottish Conservatives had reached an all-time nadir, dipping below 15 per cent of the vote in Scotland.

Since the opening of the Scottish Parliament the party’s representation there has been more stable, but it is the stability of the graveyard. Despite a succession of popular leaders – the relatively youthful and dynamic Ruth Davidson being the latest – the party has slipped from 18 to 15 seats.

What has changed is the political environment, and the opportunities it could potentially afford, plus the accelerating disarray in which Scottish Labour finds itself following the independence referendum of 2014.

Davidson thinks she knows how to grab the opportunity – by advertising the Scottish Tories as the un-shakeable party of union. The prime minister agrees.

So does Tomkins, who rejoices in the decision to replace half of the Tories’ sitting MSPs and replace them with younger, more moderate Conservatives. And he agrees that the Unionist strategy is vital.

Fry broke ties with the party irreparably when he founded Wealthy Nation – an economically libertarian campaign for Scottish independence – in 2013. For the prolific author of books focusing on Scottish history, the hard unionist turn is depressing and portentous of the Tories’ further decline.

“Ruth Davidson has insisted that Conservatives have to be unionists. She follows a strongly disciplinarian line,” he says

This practice has reduced the party to a “core” which she now expects to “reconquer Scotland”.

“There’s an attitude that if we are purist we will retain our appeal, but this can’t work,” he says.

This venture is not only doomed, but ideologically incoherent, he believes: “Uncompromising unionism with a centralised state is not a coherent part of conservatism,” he says.
“Self-reliance for individuals, for families, for communities and self-reliance for nations. That seems to me to be the logically consistent approach.

“It is pragmatically obvious that this Conservative government, based in the south-east and relying primarily on the votes of people in the south-east, does not have Scotland’s best interest at heart.”

“Conservatism is at its best where it liberalises people, families, businesses, communities, cities and invests power in them.” Adam Tomkins

The result of all this ideological confusion and split loyalties is that “the right stays fragmented because all those portions of it which have been cast-off by this centrifugal force” of the Conservative party cannot gravitate back to their home.

“As long as the Conservatives remain upon this course,” Fry adds, “the right will remain impotent. We can engage in public debates, but there is little chance of us reforming into an effective political force.”

As far as Tomkins is concerned, the Scottish Conservatives are moving into the future, and this involves a move into liberal territory: “The way forward for Scottish Conservatism is to be dynamic and promote aspiration over defending privilege. Conservatism is at its best where it liberalises people, families, businesses, communities, cities and invests power in them,” he says.

“The current government doesn’t do anything like enough to decentralise. We hear a lot about devolution to Scotland but almost nothing about devolution within Scotland. School reform is central to that.”

Removing local authorities from the provision of education and handing greater control of schools over to head teachers and parents, mirroring the growth of academies in England, is something Tomkins is very keen on: “The people who should be in charge of how schools are run, including school budgets, including hiring and firing should be head teachers, not local education authorities.

“Parent communities should be more involved as well. We are moving in that direction already, but not fast enough. That’s what modern Conservatism should be about,” he says.

Yet you are left to wonder about how contemporary or palatable this new libertarian mood is, when you find out that one of its pioneers was none other than Margaret Thatcher.

“Thatcher did a great deal of aspiration in her time in government, but never really got any credit for that in Scotland.” Adam Tomkins.

“Thatcher did a great deal of aspiration in her time in government, but never really got any credit for that up here [Scotland],” Tomkins says.

For Tomkins this modernised, liberalising party is potentially on the cusp of a breakthrough, but for Fry the Scottish Conservatives are dogmatically attached to an anachronistic union, and this encumberment will lead them nowhere.

The forthcoming election may not decide these long-run strategic questions, but by 5 May Scots will know if they live in an SNP-dominated Scotland with a once unconscionable Tory opposition.