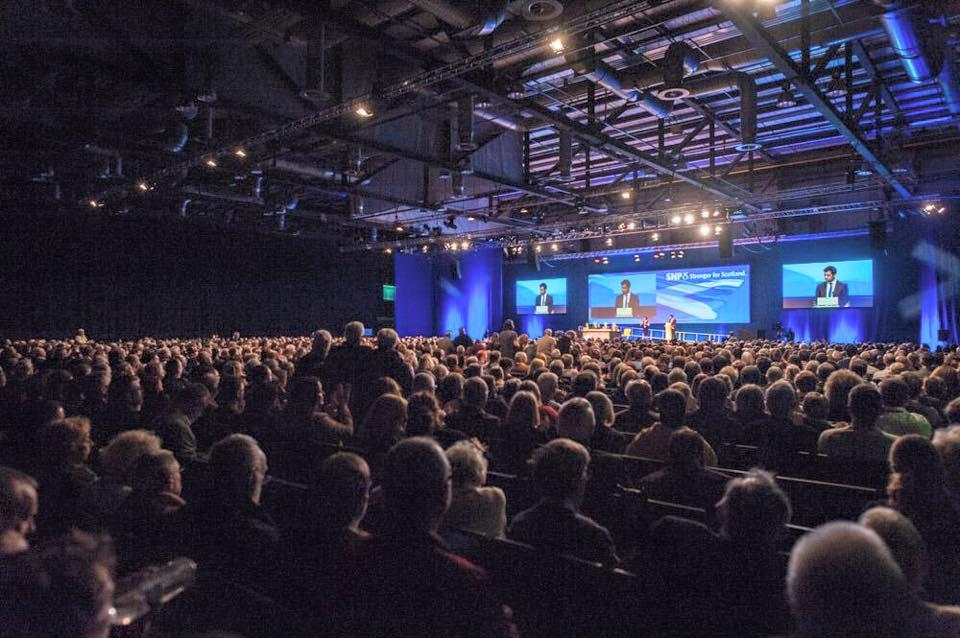 THE yellow foam fingers were back.

Scottish National Party delegates gathered at the Scottish Exhibition and Conference Centre in upbeat mood, as opinion polls continue to show support for the party at an all-time high.

Alongside the inventive souvenior merchandise on show, here are six of the highlights from the weekend’s events.

1) The conference was very, very big

Over 3,000 delegates crammed into the main auditorium. SNP politicians and supporters were keen to emphasise the buoyancy of the party, which now has over 102,000 members. The event was the largest SNP conference ever.

Or as SNP candidate George Kerevan put it: “The largest-ever political conference to be held in Scotland since Bonnie Prince Charlie’s Highlanders occupied Edinburgh.”

2) General Election on the horizon – how many seats will the SNP win?

The conference was focused on the upcoming UK General Election, which takes place on 7 May.

There was media speculation on how many seats the SNP surge will deliver, and what that would mean in a hung parliamentary system.

Speakers regularly reminded the supportive audience that the answer to Scotland’s economic and social challenges was to send a large SNP team to Westminster.

The main debate in the lead up to the conference concerned how best to increase women’s representation in politics.

A new gender balance policy was proposed for candidate selection at the 2016 election. The motion included giving the National Executive Committee (NEC) of the party the power to implement an all-women shortlist (an election with all-women candidates) if an MSP steps down.

The NEC would also gain the power to require a least one woman in a contest election and to balance the gender of candidates on the list (where candidates are selected regionally in Scottish elections).

Despite the Avonedale branch of the SNP proposing an amendment to remove the shortlists proposal, it passed with a strong majority.

Women for Independence, which campaigns for greater equality in politics, welcomed the move. “We like that all the Yes parties – Greens, SNP & SSP – are making real commitments to gender balance in politics. The Scotland we seek,” the group tweeted.

Scotland’s First Minister Nicola Sturgeon was addressing her first spring conference as party leader, and set a humble and conciliatory tone in her main speech.

Reaching out to both the rest of the UK and those who voted No in the independence referendum, Sturgeon promised that the SNP would be a constructive voice at Westminster which would relentless speak up for Scotland’s interests.

Although the speech was lighter on policy announcements, Sturgeon committed the SNP to a rise in the minimum wage to PS8.70 by 2020, and restated SNP commitments to abolish trident nuclear weapons, the house of Lords and the first past the post voting system.

Scheduled to appear during the lunch break for a question and answer session, Salmond was set to speak from a small makeshift plinth beside the main stage.

However, when the press blocked the view of the thousand strong audience the candidate for Gordon couldn’t resist the crowd’s demand to get on the main stage.

Salmond teased MSP Mike Russell as a “slow reader” for taking three hours to complete his new work. Russell replied that it took him “just a little less time than it took [Salmond] to write it”.

Salmond’s main criticism was reserved for the BBC, which he claimed was unduly influenced by the British establishment and right-wing newspapers in how it approached the referendum.

Although displeased with elements of the mainstream media, Salmond announced that ‘The Dream Shall Never Die’ was now number one in the Sunday’s Times best-seller list.

If you have never been to a conference, it involves many resolutions on party policy. The majority of resolutions already fit with what the party leadership and membership support – so there is a lot of agreement.

There were also carefully worded motions on the Trans Atlantic Trade and Investment Partnership (TTIP) and fracking – which were consistent with the Scottish Government’s position of criticism, but not outright opposition.

The conference also agreed on the importance of candidates to toe the SNP line in public.

Changes to standing order rules state that no MPs shall “publicly criticise a group decision, policy or another member of the group”. (Click here to read more on this proposal).