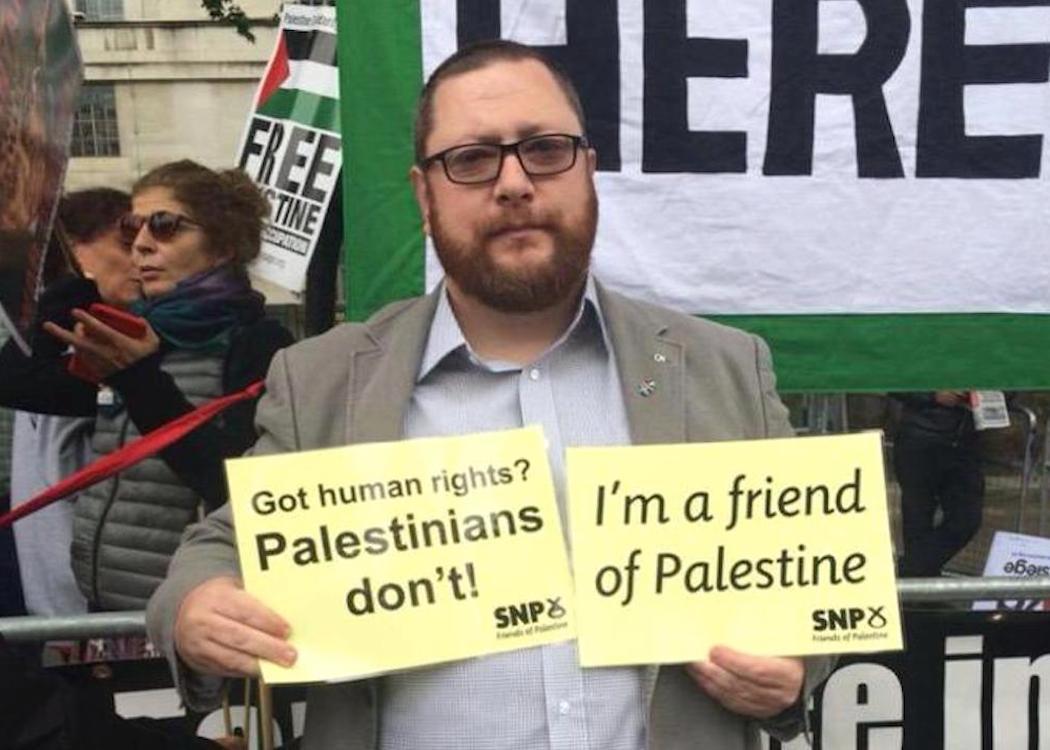 Andy Murray, convener of SNP Friends of Palestine, speaks out over his treatment and deportation

ON MONDAY 9 NOVEMBER his plane touched down in Tel Aviv airport, Israel. Andy Murray, a dad of two and community campaigner from Glasgow, was travelling to Jerusalem and Bethlehem, part of the occupied Palestinian territories.

He had meetings planned with members of the Knesset parliament, which sits in Jerusalem, as well as journalists interested in his campaigning work against the occupation of Palestine. He never made it.

On his arrival, Andy was targeted by the army guards, arrested, imprisoned overnight and then eventually deported , on the orders that he was not to attempt to reach Palestine through Israel for 10 years.

Murray has been speaking to CommonSpace about his arrest, the surveillance of his political activities by Israeli officials, the conditions in his cell and how his local MP intervened to secure his safe passage home.

“I was part of a delegation [which included healthcare workers and others planning meetings in Israel and Palestine]. I got off the plane on Monday after 11.30am. I made my way through to the passport control. As soon as I mentioned my name it was as if they were expecting me,” Murray explains.

“They took to me to the security desk then put me into the holding room. The place was full of people – especially those of Muslim and Palestinian origin.

“I was there for quite a while, then I was taken through by the security services. I was interrogated by one person then one of his colleagues came in. It got pretty rough. They were very personal and probing. This went on for quite a while. Every question they asked I answered fully and truthfully.”

“I was told, and this is a direct quote, ‘Look out the window. Do you see fucking Big Ben? You don’t have any rights here.'” Andy Murray

Murray, isolated and in this first episode of interrogation for well over an hour, was asked for his travel plans. When he provided his itinerary he was accused of lying.

“They wanted to see my phone. I showed them. I was asked who the Muslim name at the top of the list was, someone I knew from home.

“Then they started taking the names and details down. I told them to stop. This is wrong. I know in the UK this is illegal. The attitude of the two of them changed immediately. They told me to stop lying or the consequences would be serious.

“Then I told them I wanted to speak to someone from the UK embassy. I was told, and this is a direct quote, ‘Look out the window. Do you see fucking Big Ben? You don’t have any rights here.’ I was ignored.”

Refusing to provide access to a UK embassy for a UK citizen raises serious diplomatic issues. CommonSpace has been told that the case is likely to be raised with the foreign secretary.

The targeting of Murray follows moves to tighten the political and racial targeting of entry to Palestine via Israel. Due to the blockage of Palestine and the bombing of Gaza’s airport, access can only be approved via Israeli border checks. Recent legal proposals suggested complete bans on activists who support justice for Palestine.

“[The official] pulled out a file. There were photographs of me at a Palestine demonstration on Saturday [7 November] in Glasgow. There was a photo of me at the SNP conference.” Andy Murray

Murray, following his first interrogation, was sent back to the holding room alongside other detainees. He phoned his wife and asked her to contact Carol Monaghan MP for help, a move that would eventually secure his release.

After several hours in the holding room he was called to examine his suitcase. “I walked into the room and my suitcase was there. They opened it all up and asked me to identify all the contents. They had equipment for testing for explosive residue. They tested every piece of clothing, every item,” he explains.

“They did a full body search and swap search. All over my body. My groin. Everything. This went on for over an hour. They took all my equipment. My laptop. My phone.”

By this point Murray was over 10 hours into a process of interrogations, searches and being held in a crowded pen of airport detainees.

If it wasn’t clear already that it was Murray’s political affiliations that led to his arrest and detention, officials decided to emphasise the point.

“I was taken to another office. He said he was immigration. He started to ask questions again. He pulled out a file. There was photographs. They’d hacked all of them. There were photographs of me at a Palestine demonstration on Saturday [7 November] in Glasgow. There was a photo of me at the SNP conference [Aberdeen in October 2015].

“He put that on front of me. So I explained my connection with SNP Friends of Palestine. He served me with a deportation order and a 10-year ban from visiting Israel.”

Murray, having been denied diplomatic support, was told he faced a five-day wait in detention before being allowed to return home. He was then taken to a new detention centre.

“Carol [Monaghan] got me home to my kids. For that I am eternally grateful and I will never ever forget it.” Andy Murray

“Guards took us to a detention centre 20 minutes outside the airport. We were put in cells and told we would be there until we were removed from Israel. It was 11pm by now and I hadn’t eaten properly.

“We were locked in a cell – four men – with the lights on all night on and with the door opening and shutting through the night.”

The following morning, stuck in two-day old clothing, Murray was allowed to walk in a courtyard and granted a cold shower before being returned to the cell.

At home, the British embassy in Tel Aviv had been contacted. Monaghan had intervened. Rather than face a further four days imprisoned, he would be released that day.

“From what I can gather, due to Monaghan’s intervention I got out of there at 3pm on the Tuesday, Tel Aviv time,” he says.

“Carol [Monaghan] got me home to my kids. For that I am eternally grateful and I will never ever forget it,” Murray adds.

Yet strangely – despite the ordeal lasting over 24 hours through a Kafkaesque trial of questions, searches and accusations – Murray remains unfazed.

“I’m just thankful that I wasn’t treated like a Palestinian because I don’t know if I could have dealt with it. There’s plenty of proof of evidence [of mistreatment in Israeli jails]. I wasn’t tortured. I wasn’t starved. I wasn’t beaten,” Murray says.

He was “mentally drained, but not surprised” by what he experienced.

“There are many people in Israel who want an end to the occupation. We are not enemies of anyone. I oppose Zionism and the occupation of Palestine.” Andy Murray

“It was quite obviously because I was a Palestinian activist. They don’t want those people in. The one thing that I noticed was the paranoia. They don’t want people to see what’s happening,” he says.

What was more concerning for Murray was the denial of embassy services, which without the support of his local MP could have made the experience far worse.

“It worries me that a UK citizen can be treated like this and denied access to the embassy. Questions need to be asked. It’s shameful.

“There are many people in Israel who want an end to the occupation. We are not enemies of anyone. I oppose Zionism and the occupation of Palestine.”

Instead of dampening his enthusiasm for humanitarian work to support people in Palestine, his activism has been further spurred by his treatment from security services.

“Palestine got me involved in politics,” Murray explains. “I’ve always had an interest in humanitarian issues – myself and my wife. As long as I can remember we’ve been involved in the struggle for peace in Palestine.

“As soon as there was the surge in membership [in the SNP], we set up SNP Friends of Palestine to give information to all these new members – 114,000 – to show them what’s happening and make it high on the priority list for the SNP.

“Palestinians don’t enjoy equality. Whether you agree with a one or two-state solution, what they want is equality of rights and justice. They want an end to occupation. That’s what we’re fighting for. Equality for Palestinians and an end to the occupation.”

CommonSpace previously revealed that 30 SNP MPs have backed the campaign in its first year, with Murray suggesting the numbers have grown even higher.

The group is now discussing campaigning for the party to support the Boycott, Divestment, Sanctions (BDS) movement, which seeks to bring about a peaceful resolution to the occupation.

Murray has since been inundated with messages of support from party MPs and other groups across Scotland: “It has solidified the commitment within SNP Friends of Palestine and solidarity groups across the country on our desire to fight for a just settlement for the Palestinian people,” he concludes.