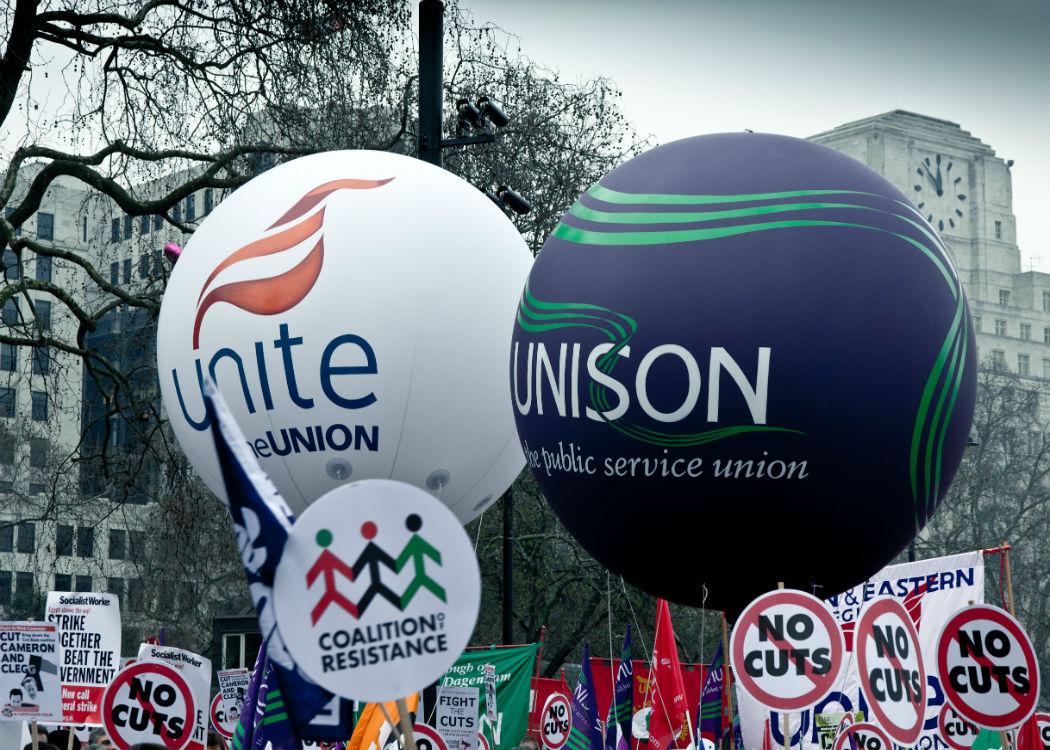 Trade unionists and campaigners have major concerns over the bill, which restricts trade union activity

THE Conservative Government’s Trade Union Bill has cleared its second reading and is now in the committee stage in the UK Parliament.

It contains a range of clauses that that restrict the ability of trade unionists to organise, to self-finance and effectively rules out strikes in whole industries.

The legislation and procedure can be tricky to follow, so CommonSpace looks at some of clauses and the effects they will have.

This is the issue the UK Government wants to talk up the most. It’s usually the one splashed all over the front of tabloid newspapers on big strike days, alongside complaints about ‘union barons’. The government says turnout in union strike ballots is most often too low to justify strikes.

In ‘important public services’ including fire, health, education, border security and transport (most of the public sector), unions will require a 50 per cent ballot turnout and 80 per cent of that turnout must vote in favour of a strike for it to go ahead. This will effectively rule out strikes in key industries.

Of course, no other democratic institutions in the UK will be under these stipulations. By these rules no government, national or local, would have ever been elected in the UK.

The new bill will not only allow but encourage employers to break strikes with replacement agency labour.

Because under the terms of the bill strike action must be announced 14 days in advance, employers will not only have the legal right but ample time to organise what trade unionists have traditionally called ‘scabbing’.

Not only does this undermine the entire premise of workers organising to negotiate the terms of their work lives, it has frequently in the past led to violence between union workers and strike breakers, part of the reason it was banned in the UK in 1973.

But also because this is being introduced as legislation and because a great deal of public sector strikes are overtly political, it amounts to the state enlisting citizens to actively disrupt a protest against the government.

With industrial action at historic lows, much of what trade union representatives now do is ‘case work’, helping individual members with small disagreements with their employers and meeting with workers to hear about any concerns or frustrations.

Representatives will, under the bill, be forced to disclose information about their time spent on these duties, a peculiar intrusion into the democratic right of people to self-organise.

Also, unions are usually financed through ‘dues’ deducted automatically from their members’ pay, in much the same way as a monthly subscription can be deducted from a bank account, a practice referred to as ‘check-off’. The bill will ban this practice, creating extra costs and bureaucracy for unions.

4. New powers for the union regulator

The certification officer, an official who regulates trade unions in the UK, will be given new powers to investigate trade unions – including the right to see membership lists, even when no complaint has been made about a union.

The officer will now have the ability to impose fines of PS20,000. The certification officer’s costs will be charged to trade unions.

The expansion of this traditionally limited official’s powers and reach, holds out the ominous possibility of the state developing a specific anti-union activity branch, like those that existed in autocratic states in Europe at the turn of the 20th century. The officer’s right to know the membership of unions is a detour from an age supposedly concerned with privacy and freedom of association.

Pickets are groups of strikers who stand outside workplaces and ask other emplyees to observe the strike.

The UK already has the most restrictive anti-picketing laws in Western Europe. Picket lines of no more than six workers are presently allowed under UK law.

Under new rules, pickets will have to be announced 14 days in advance. Each picket must have a person in charge and that person must be identifiable at all times. This person must liaise with the police. Every detail of the picket must be reported, down to any placards or any other ‘props’ that will be brought to the picket.

What people are saying about the Trade Union Bill

“These changes are being introduced so that strikes only happen when a clear majority of those entitled to vote have done so and all other possibilities have been explored.” Business Secretary Sajid Javid

“The irony of this bill is that it comes from a political party that believes the answer in today’s world is to deregulate – except in the case of the trade union movement and trade union law.” Chris Stephens, SNP member for Glasgow South West

“Demonstrations are to be severely circumscribed and discouraged in a way that we would not expect to see in a modern democracy such as the UK. Basic civil liberties are under attack, which will have implications way beyond the union movement.” Frances O’Grady, TUC general secretary

“Under the current law, trade union leaders can call a strike that is backed by just a small fraction of the union membership a full 12 months ago. Even if just a handful of members cared enough to bother to vote, the strike ballot will be legal and fellow members will be required to stand by their union brothers and sisters.” Julia Hartley-Brewer, journalist

“Unite is not going to see itself rendered toothless by passively submitting to unjust laws. If the Tories wish to put trade unionism beyond the law, then they must take the consequences.” Unite General Secretary Len McCluskey