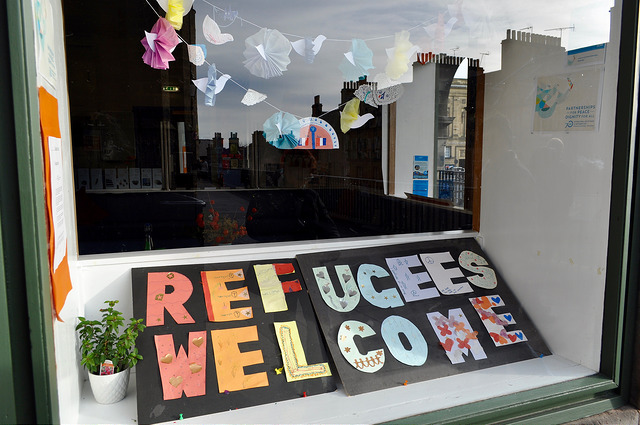 PATRICK HARVIE has reiterated calls for the Scottish Government to enter a public sector bid for support services for asylum seekers in Scotland.

This follows recent criticism of both the UK Government and private sector involvement in asylum services by the Scottish Refugee Council.

Speaking at General Questions in the Scottish Parliament on Thursday, the co-convener of the Scottish Green Party raised the matter of asylum services with Communities Secretary Angela Constance, who agreed with Harvie that asylum services should be run by the public or third-sector.

On November 21, the contract the provide housing for those seeking refugee protection in the UK was opened to tender. At £4bn of public money – £500m of which is expected to be assigned to Scotland – the contract is one of the UK Government’s largest, and will set the nature of asylum accommodation in the UK for the next decade.

However, there has been concern amongst some politicians and asylum advocacy groups that these public funds will, as in the past, go to private sector companies, rather than to support local government and the local communities affected by asylum housing and support.

“No one should be satisfied with the current level of provision of asylum accommodation and support services.” Green MSP Patrick Harvie

A Home Affairs Select Committee inquiry in January 2017 referred to the asylum accommodation provided by some UK Government contractors as a “disgrace”, and identified widespread instances of vermin, unclean conditions and inadequate support for vulnerable people, including cases of late-stage pregnant women being made to share bedrooms and climb several flights of stairs.

Referring to this inquiry, Harvie told Holyrood: “No one should be satisfied with the current level of provision of asylum accommodation and support services”. He asked: “Has the Scottish Government indicated to the UK Government a desire to put together a public sector-led bid to take on lot 5, which covers Scotland? If not, will it do so?”

Constance responded that she had written to the UK Government on “at least” three occasions to express Scottish Government concerns regarding the current contracts, and had raised what the Scottish Government regards as the desirability of a public sector bid for the contract to two immigration ministers.

Constance said: “Despite receiving a verbal assurance that the Home Office was open to a range of ideas, I am disappointed, as Mr Harvie is, that the Home Office and the immigration minister, in particular, have not responded to the detailed points made by the Home Affairs Committee – indeed, they have ignored many of those points – not least about the need to recognise the devolved administrations as partners.”

“For the avoidance of doubt, the Scottish Government has always made it clear that the provision of asylum accommodation and support should be led by the third sector or the public sector.” Communities Secretary Angela Constance

Constance did not commit to supporting a specific bid, saying that any public sector or third sector organisation involved would need to demonstrate that it could produce asylum services of sufficient quality, but continued: “For the avoidance of doubt, the Scottish Government has always made it clear that the provision of asylum accommodation and support should be led by the third sector or the public sector and not by those who have profit as a motive.”

Commenting further, Harvie said: “Accommodation and support for people seeking asylum, often from extremely distressing situations, must be provided to a standard we can be proud of as a welcoming nation. The UK Government wants a cut-price and inadequate service because it wants a system that humiliates and degrades people.

“The Scottish Government should support the creation of a not-for-profit bid for the tender.” Green MSP Patrick Harvie

“Current private sector provision has attracted serious criticism yet the new tender document doesn’t appear to address these concerns, and local authorities are locked out of any oversight.

“Given the impact on devolved responsibilities such as housing, health and education, the Scottish Government should support the creation of a not-for-profit bid for the tender. While it’s welcome that Scottish Ministers agree that the service should be public or third-sector rather than for-profit, what matters most is putting that principle into action.”

In September of 2016, First Minister Nicola Sturgeon supported cross-party talks on the subject of a public bid for asylum services, saying: “Our position and principle have always been that asylum seeker accommodation should be provided in the public sector.”

Shortly after the contract for asylum services became open to bidding, Scottish Refugee Council Head of Policy and Communications Gary Christie commented: “This contract allows huge multinational companies to make decisions about where people live and no one in the communities affected can do anything about it.

“The recent Westminster report included a range of recommendations to address these failings. Shockingly, none of these recommendations are included in the Government’s new tender document.

“While private companies receive millions of pounds to provide accommodation, local authorities may once again receive nothing from the Home Office to provide the additional services that new members of a community need, including health services, schools and colleges, and legal support.

“The current system of dispersal sees some of the poorest areas of the UK supporting the greatest number of new arrivals. For this to be sustainable we urgently need to see additional resources and finances directed to these communities.

“This is poor public policy from the UK Government, which seems to be listening to no one on this issue and disregarding all evidence and expertise.” Scottish Refugee Council Head of Policy and Communications Gary Christie

Christie continued: “Over the last four years we’ve witnessed private companies source the cheapest accommodation available for people in need. We’ve seen no evidence of these companies making efforts to put services in place to give people a fair chance at a successful claim for refugee protection and support their integration into society.

“The Home Office’s acquiescence in this demonstrates a clear lack of commitment from the UK Government to supporting refugee integration – putting them on a collision course with the Scottish Government’s policy of supporting integration from day one.

“This is poor public policy from the UK Government, which seems to be listening to no one on this issue and disregarding all evidence and expertise.”