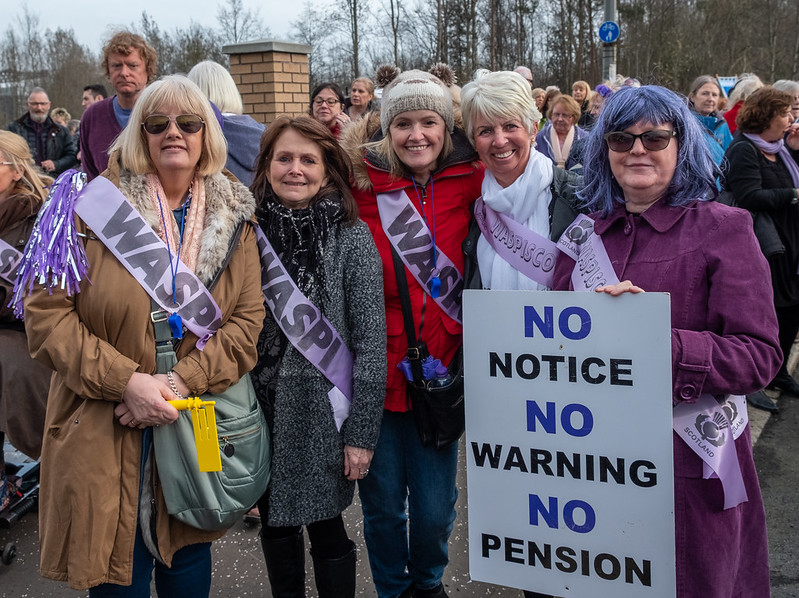 FIRST MINISTER Nicola Sturgeon has called on the UK Government to reverse the policy that has seen millions of women born in the 1950s lose money following the raising of the pension age from 60 to 66.

Many women born in the 1950s, along with sympathetic campaigners, have argued that the adjustment in pension age is unfair, due to the lack of notice given to the affected women to prepare for years without an expected state pension.

Following today’s verdict at the High Court – which saw the case of two claimants who argued that the raising of their pension age by the Department of Work and Pensions (DWP) “unlawfully discriminated against them on the grounds of age, sex, and age and sex combined” dismissed on all grounds – the SNP also pledged the “stand up for WASPI [Women Against State Pension Inequality] against the cavalier attitude of this Tory Government.”

In their judgement, Lord Justice Irwin and Mrs Justice Whipple said: “The wider issues raised by the claimants about whether the choices were right or wrong, or good or bad, were not for the court. They were for members of the public and their elected representatives.”

At today’s First Minister’s Questions, SNP MSP Sandra White asked: “Would the first minister agree with me that the UK Government must acknowledge the suffering and disenfranchisement caused by the transition period for these women, and would she also agree with me that a payment should be made to all WAPSI women?”

Sturgeon said in response: “I am, like many people, disappointed in the court judgement this morning, although it is entirely a matter for the court. But these women shouldn’t have to be in court, trying to protect what is theirs by right. The UK Government have effectively robbed women of their pension entitlement, and it is absolutely disgraceful.

“So I would take this opportunity today to call, like Sandra White is doing, on the UK Government to reverse this policy – to give back to women what is rightfully theirs, and to ease the suffering that so many women are experiencing because of this.

“When people save for their pensions, they have a right to expect that that’s what they will get, and not have it taken away from them by a Tory Westminster government.

“And it’s particularly, I think, worth pointing out that this is something that affects women in particular, and that makes it I think even more regrettable that these women are in that position.”

Also commenting on today’s High Court ruling, SNP MP Mhairi Black said: “This is a disappointing ruling for the thousands of women who have been fighting tirelessly against pension injustice, but the campaign of 1950s women continues.

READ MORE: Scotland’s women march against May for justice on pensions

“The SNP will continue to stand up for WASPI women against the cavalier attitude of this Tory government who appear hell-bent on short-changing pensioners across Scotland and the whole UK.

“It’s time for the Tories to undertake a full impact assessment on how successive UK governments have disadvantaged WASPI women. Once this assessment has been completed, a payment acknowledging any disadvantage caused should be made to 1950s women without delay.

“With the lowest state pension in the developed world and galling pension injustice for 1950s women, it’s clear that the UK government cannot be trusted to deliver for our pensioners. Only with the full powers of independence can pension justice be delivered for Scotland’s pensioners.”

Elsewhere in Scotland, activists pledged to continue the fight on behalf of Waspi women.

Speaking in Glasgow, where dozens gathered around the statue of Mary Barbour in Govan to await the court’s ruling, WASPI Glasgow and Lanarkshire member Rosie Dickson said: “This is only one arrow in our weaponry for the fight. It is an injustice as well as an inequality.

“This is money that is coming out of our pockets. We won’t stand for it. We will continue the fight. The fight is not over. This is not the end.”