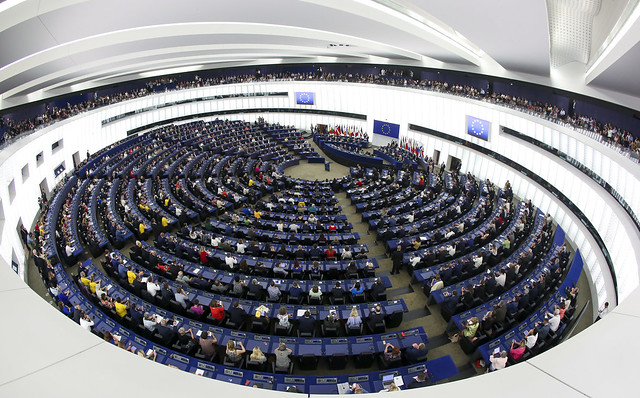 THE ABSENCE of Catalan MEPs vetoed by Spanish authorities “undermines the credibility of this house,” the EU Parliament was told today [2 July], as thousands of demonstrators rallied on the streets of Strasbourg in support of the three exiled or imprisoned politicians.

Following yesterday’s decision by the Court of Justice of the European Union not to grant interim measures to Carles Puigdemont and Toni Comin – both of whom are currently abroad and wanted by Spanish authorities for their involvement in Catalonia’s 2017 independence referendum – which would have allowed the pair to attend the parliament’s opening session today, a reported 10,000 Catalan protestors and sympathisers gathered in Strasbourg to voice their support for the MEPs-elect.

At present, the three politician’s seats within parliament remain vacant; former Catalan vice president Oriol Junqueras was denied permission for a temporary release from imprisonment to attend by the Spanish Supreme Court, while former Catalan president Puigdemont and former Catalan health minister Comin have been refused the right to be sworn in and collect their papers as MEPs anywhere but Spanish territory, where they would face arrest.

Nevertheless, the possibility remains that the trio could take their seats following legal action. The lawyers of the three Catalan politicians have announced that they will pursue their case at the Court of Justice in Luxembourg, on the grounds that their right to passive suffrage – i.e. their right to stand for public office within the EU – has been violated.

Today’s events, organised by the private Catalan exile body the Council of the Republic, saw thousands of protestors travel for several days via a fleet of coaches and two charter flights in order to attend the demonstration, which this afternoon culminated with the proclamation of the ‘Let’s Fill Strasbourg Manifesto’ after it garnered over 30,000 signatures and the support of over 30 political platforms and organisations.

The document states that Junqueras, Puigdemont and Comín represent over 1.7 million votes in Catalonia and warns: “Spain is passing on to the European Union its repressive solution to the peaceful, civic and democratic demand of the Catalans “. The manifesto calls upon the EU “to take the initiative to promote and mediate in the dialogue and negotiation between Catalonia and Spain on the right to self-determination.” The manifesto was later presented to the European Parliament’s registry, accompanied by a letter to the EU Parliament president Antonio Tajani.

READ MORE: ‘The repression is not stopping’: Quim Torra calls for answers after UN report advocates release of Catalan prisoners

The protest also demanded that Spain to comply with the May resolution of the United Nations Working Group on Arbitrary Detention, which ruled the imprisonment of Junqueras, Jordi Cuixart and Jordi Sànchez was politically motivated and called for their immediate release.

Although Junqueras remains imprisoned in Spain, Comin and Puigdemont were initially expected to attend the Strasbourg demonstration; however, the two reportedly decided against this, due to fears that they could be detained in France during the journey, and have remained across the border in Germany, which has previously rejected Spanish attempts to exercise a European Arrest Warrant for Puigdemont on charges of rebellion.

BREAKING: Thousands of Catalans demand independence and call on the European Parliament to respect elected MEPs Puigdemont, Junqueras and Comín in an unprecedented march in Strasbourg. pic.twitter.com/9Li6LgcL9v

In a video address to the crowd, the Catalan President called on Tajani to “respect democracy” and the results of the European parliamentary elections which saw Puigdemont, Comin and Junqueras elected and pro-independence Catalan parties secure a majority within Catalonia.

“The EU is surely about democracy and dialogue, where the actions of Madrid are seeking to use ever more outrageous interpretations of the law to close dialogue down.” SNP MEP Alyn Smith

“I am always at pains to stress that Scotland is Scotland and Catalonia is Catalonia, but the EU is surely about democracy and dialogue, where the actions of Madrid are seeking to use ever more outrageous interpretations of the law to close dialogue down.

“I, along with Christian and Aileen were proud to show our support for their taking up their mandates. Where Mr Puigdemont and Comin have expressed a desire to join our group if they can take up their mandates, obviously we cannot deal with this until they are.

“We will be taking forward the energy of today’s demonstration by writing to the new European Parliament President – whoever he or she may be – to raise their cases with Madrid urgently.”

During the parliament’s opening session, Irish Sinn Féin MEP Matt Carthy denounced the absence of the Catalan MEPs-elect, demanding that “the voices of the people of Catalonia must be heard.”

Addressing President Tajani specifically, who presided over today’s session, Carthy stated that the refusal to allow the presence of Puigdemont, Junqueras and Comin “undermines the credibility of this house”, which he described as being entrusted with “standing up for democracy and human rights “.

Addressing press after the plenary session, Carthy – who is a member of the EU-Catalonia Dialogue Platform – added: “Tajani opened his remarks by describing the European Parliament as the house of democracy, the only EU institution that is directly elected by the people. If that is the case, the votes of all the people must be equal and there cannot be administrative or judicial barriers put in place to prevent the will of the people from being recognised.

“Two million Catalan people voted for their MEPs and they are as entitled to have representation in this house as those who voted for me or anyone else here.”