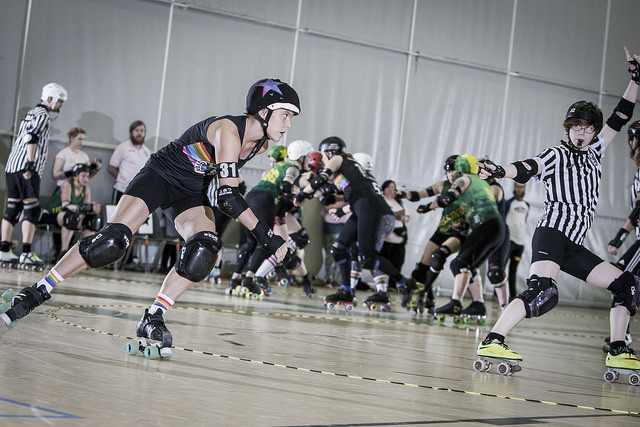 The founders of Glasgow’s junior queer roller derby league speak to CommonSpace about stage names, feminism and setting an example

“WE aim to enhance our lives through sweat, solidarity, endorphins, contribution, community, and glitter.” These are the inviting words of Resistance Roller Derby Glasgow’s Facebook page, and ones which encapsulate the ethos it is seeking to create with its fledgling league.

Resistance Roller Derby, which will have its first intake of recruits in the New Year, is the second roller derby league for under-18s in Scotland and the only junior league in the world explicitly aimed at LGBTQI+ players.

The league is the creation of two seasoned members of Glasgow Roller Derby: Fever (sometimes Fever Glasvegas) and Feminist Killjoy (the referee pictured at the far right of the main picture), known as Catriona McAleer and Freya Gosnold in the non-derby world.

Fever, pictured below on the front right 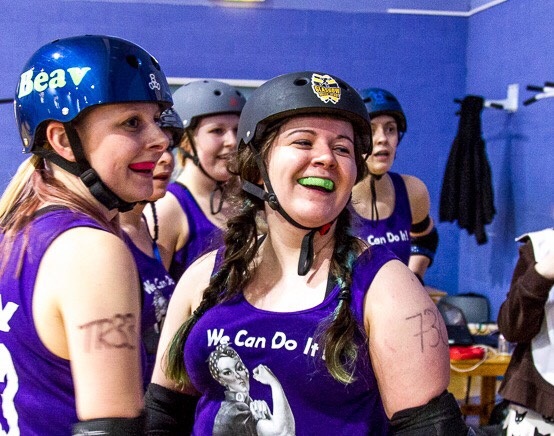 The founders explain that the league follows on from a long tradition in which roller derby has been a historically women- and queer-centric sport.

“Modern roller derby originated in queer subculture in Austin, Texas,” Killjoy says. “It’s revolutionary nature has spread with it around the world, leading to an international movement of connected and empowered athletes.

“Roller derby is inherently feminist, and there are a great number of top-level athletes within the sport who are visibly and openly queer. In this way, the sport and the movement are already radical, and we believe that this can and should be pushed even further.”

“Roller derby is inherently feminist, and there are a great number of top-level athletes within the sport who are visibly and openly queer.” Feminist Killjoy, Resistance Roller Derby Glasgow

Roller derby is a contact sport played on quad roller skates on an oval track, where one player (the ‘jammer’) from each team has to lap the other team as many times as possible in each two minute ‘jam’ of the game, while the opposing four players (the ‘blockers’) try to stop them.

In order to play, participants need to wear skates and full protective gear, which can be an expensive investment.

This is why Killjoy and Fever are raising funds and used equipment to ensure that participation can be accessible to all members, who will be aged 12-17.

“We are all about radical kindness and elevating each other. We want to bring joy and positivity into the lives of queer youth, who often have a tumultuous adolescence,” Fever says.

“As trans and queer adults living in Glasgow, we feel it is our responsibility to make the space we wish we had had, and in the process we hope to connect our young people with an intergenerational international community, full of real live examples of how queer adulthood can look.

“We are all about radical kindness and elevating each other. We want to bring joy and positivity into the lives of queer youth.” Fever, Resistance Roller Derby Glasgow

“In addition to financial accessibility, we are committed to making a space that is inclusive for those who are systemically disenfranchised as result of other axes of oppression such as race and disability, and we will work constantly to ensure that anyone who wants to take part can.”

For Killjoy, who works with LGBTQI+ young people through LEAP Sports Scotland, increasing participation in sport is a priority. To remove barriers to involvement, the new league will not require a dues subscription, and will not follow an attendance policy. 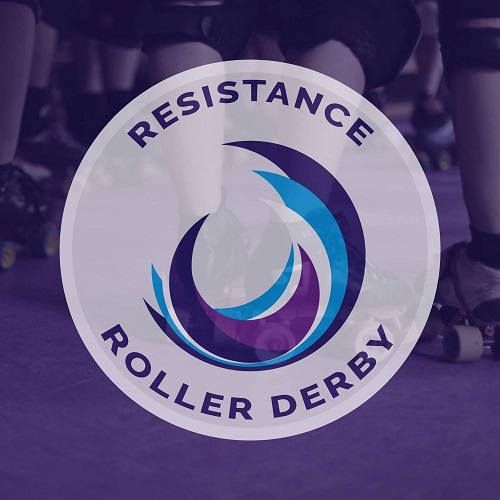 “LGBTQI+ young people have lower rates of participation in sport and are more likely to be dealing with barriers such as mental ill health, homelessness and abuse than other young people,” Killjoy explains.

“We hope that RRDG will be a community that works to address and break down as many of those barriers as possible from the very beginning.”

So far, £1,732 has been raised for Resistance Roller Derby Glasgow through crowdfunding and they are organising a kit drive this month. Going forward, the league plans to sustain itself with monthly fundraising scrimmages for adult skaters and officials from any league, and by applying to funding bodies.

“I think for many queer and trans people there is immense power in being able to choose and claim and own your own name and labels.” Fever, Resistance Roller Derby Glasgow

“Support from the wider community is vital for us to be able to do and keep doing this,” Fever says, so they will be seeking support through donations and standing orders on an ongoing basis.

And what about those nicknames? “Part of the joy of roller derby for a lot of (especially feminine-identified) people is the opportunity to shed societal strictures and become a bigger, stronger, more badass version of yourself, which then carries back over into ‘real’ life”, Fever explains.

“I think for many queer and trans people there is immense power in being able to choose and claim and own your own name and labels, and so the tradition of roller derby nicknames has a lot to offer in that respect.

“It is a reminder that roller derby originated as a subculture, not just a sport, and that its potential for subversion and revolution is a crucial part of it – which is a lot of what we’re trying to do in Resistance.

“My name was originally Charlotte Fever – a traditionally female name and medical fun, what more could you ask? Then it turned out of all the leagues in the world there was a Sharlotte Fever in Auld Reekie Roller Girls (Edinburgh), so I dropped it to just Fever. Occasionally it is Fever Glasvegas because I enjoy that a great deal.”

“I’m involved in roller derby is because I’m a feminist killjoy, it’s why I’m here rather than in any other sport.” Feminist Killjoy, Resistance Roller Derby Glasgow

Feminist Killjoy, who is an official for Glasgow Roller Derby, chose the name because officials “have to be quite serious and dispassionate during gameplay. So it’s a play on that aspect of officiating, at the same time as reclaiming the term that’s been used against me.

“I spend an awful lot of time raging against cis- and hetero- normativity and patriarchy, so it’s important that the version of my identity that I’ve built for myself within roller derby embraces that.

Information on signing up and donating can be found here on Facebook or by emailing resistancerollerderby@riseup.net.

Pictures courtesy of Inkinen Juha and Dave McAleavy of boutday.com