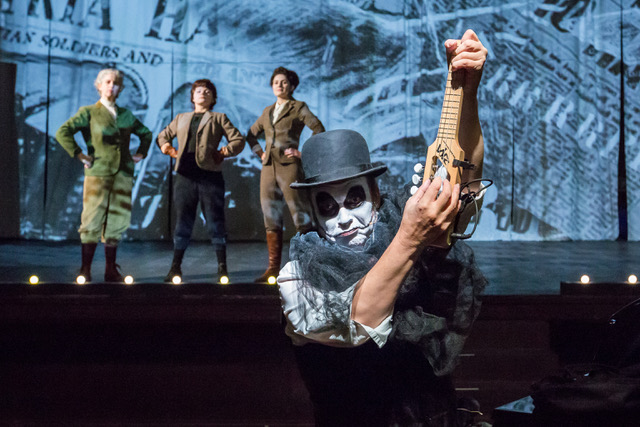 John Davis, Professor of Education at The University of Strathclyde, reviews the Scottish/German collaboratively directed anti-war play The Last Days of Mankind, currently running at Leith Theatre, which involves an international cast of theatre groups, musicians and actors.

WHEN the Leith Theatre audience rose to their feet to acclaim three hours of visually creative, emotionally evocative, physically gruelling and politically powerful theatre cabaret, they knew they had been privileged to have witnessed the most arduous, telling and impactful anti-war performance you will see in Scotland this year.

The international cast ensures the production brings a fresh and insightful view to the topic of WWI.  The performance moves beyond ethnocentrisms, xenophobia and tired metaphors to portray the multiple-perspectives of what it is to be human in a time of slaughter.

The play uses ‘physical theatre’ to enable it to intelligently portray the full body shattering, skin burning, bullet ripping and unremittingly senseless horrors of war. The juxtaposition of the contorted physical embodiment of war with soul examining cabaret music, directed and sung by that peerlessly of ghoulish divas Martyn Jacques (and his Tiger Lillies’ band members) , gifts the production a golden threaded set of allegories concerning every day folks’ experiences. Key messages include that there can be no sanitised death in war; that the class who asked disabled people to hide their post-war torn disfigurement knew no shame; that hunger and starvation (in our times food banks) are the result of the way society is organised and not the fault of the individual; and mistreatment and violence can have no philosophical or practical justification.

READ MORE – Robin McAlpine: British propaganda has made a mockery of the centenary of Armistice

When inviting the audience to connect their own feelings of grief and loss to those of the characters, the play poses questions about how we represent, support and restore mental health & well-being, and, it asks us to think about the future of a Europe that includes rising English nationalism, a heavily controlled media and a relentlessly selfish wealthy elite.

The play consistently, humorously and cleverly contrasts the war experiences of everyday folk with the censorship, jingoism and dishonour of the classes who perpetuated the debasement, disfigurement and destruction of so many European citizens.  And this contrast enables the play to provide a ton of messages for modern times which are repeatedly hit home through very sarcastic, dark and emotive Tiger Lillie songs such as England; Die For Your Country; Dance of the Death; Hymn of Hate; Infant Mortality; Café Europa and, my personal favourite, Million Martyrs To Love.

The songs have been made into an accompanying album and The Last Days of Mankind is a musical and artistic triumph.  The costume and visual designers can be extremely proud of the pictures that are painted in front of the audience and the video/visuals that are projected onto the curtain and back drop.  The rustic and ‘by-gone-age’ nature of Leith Theatre, itself only recently saved from destruction, is innovatively utilised by the directors, balcony, aisles, doors and all, to bring the play right amongst the audience.

Hard hitting and impactful scenes include: a starvation scene where the cast eat ripped strips of newspaper; a scene where wealthy dinner party members act out the experiences of their poorer, lice ridden and grief stricken fellow human beings (which brought to mind the Johnny Cash song line concerning fancy dining cars); and a scene where three actors disrobe and are treated as if they are burns casualties experiencing various impairments.

This casualty scene includes a young child in a manner that is fleetingly reminiscent of the baby scene in the play Trainspotting; not copying in anyway, but equally as powerful.  Indeed, several scenes brought a lump to the throat and the last 20 minutes of the play are worth the ticket price alone.  They include epic anti-war monologues and exhausting final scenes that leave the audience with a completely clear message that this play might be about WWI but the issues of ‘death or peace’ are still with us now.

The booking website explains there is nudity within the play but this is never pornographic nor inappropriate, indeed you could hear a pin drop when the use of gas as a tool of war is silently, explicitly and nakedly portrayed at the end of the dinner party scene.   Similarly, the humour, though sarcastic, is not offensive.  For example, you are invited to laugh empathetically at: the futility and ‘bullshit’ of those who instigate war; the irony, and yet pain, of a wife who becomes pregnant when her man is away at the front and the naivety of a class who think honour, medals and valour are worth the massacre of innocents.

It is incredibly appropriate that this new show should be created for and performed in Leith Theatre on Armistice weekend. Leith being subjected to bombing by Zeppelins in WW1 on 2 April 1916 and Leith Theatre, when called Leith Town hall, having had its roof shattered during WWII in air raids carried out on Edinburgh on 7 April 1941.  When you read about those events you learn that it is not just men who die in wars, women and children are killed too.

In particular, this play is innovative in the way that it widens our gaze to understand that war is not simply about soldiers nor, only, a game played out by men, against men – it is a heart wrenching process that involves different women’s perspectives depending on their age, class, values and prejudice.

It is testimony to the vision of the collaborative team that, from an idea borne four years ago, such a diverse group of actors and performers, in relation to age, language and culture, could be brought together, for the one hundredth anniversary of the armistice.  The production, supported by Creative Scotland and Creative Europe, demonstrates what can be achieved when Scottish agencies and organisations collaborate directly with their partners in Europe.

This collaboration provides us with encouragement to stand above nihilistic Brexit discourses, and build on the best of our abilities, whatever the country we are born in, to produce outstandingly creative and innovative outputs. Stick that in you Brexit pipe and smoke it is at least one of the forceful messages of this play.

It would be unfair to pick out any single actor for praise in a play that is so against the current age of elitism.  Suffice as to say, the huge triumph of this production lies in its ability to bring together so many talented, highly quality and commanding professionals.  Those of us who were lucky enough to be there on Saturday night, for a performance that made the hairs stand up on the back of your neck, owe a great debt of gratitude to the visionary organisers.

This play is a must see for those looking for an antidote to the austerity, political conflict and war-mongering of our present age.  It’s current run is for only seven nights from 10-16 November – so grab the chance to see it while you can.

Picture: Martyn Jacques of Tiger Lillies appearing in the the Last Days of Mankind at Leith Theatre company