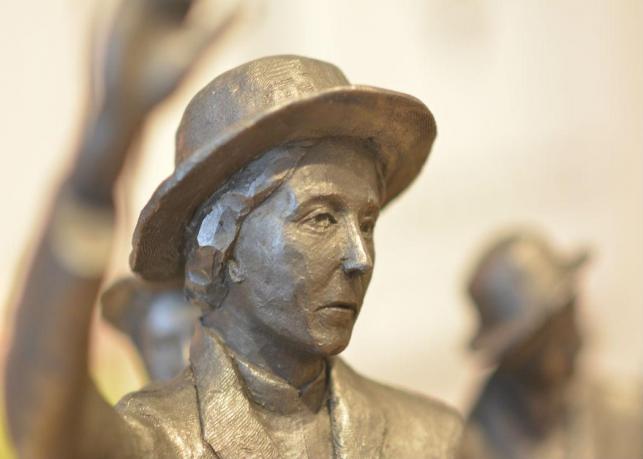 A NEW dramatic tour through Glasgow’s streets is set to remember the lives of the city’s radical women leaders.

The lives and protests of figures including the anti-fascist Spanish Civil War volunteer Ethel MacDonald, the leaders of the Glasgow rent strike movement Mary Barbour and Helen Crawford and the abolitionist Jane Smeal will be depicted alongside ordinary Glaswegian women living their lives in historic and contemporary Glasgow.

The production, Hidden Footprints and will take place at the 2017 Merchant City Festival on 29-30  July.

The historical drama will be brought to life by the Women’s Creative Company and A Moment’s Peace Theatre Company in Glasgow’s Merchant City area.

“It’s been really exciting uncovering some of the hidden history of Merchant City. We’ve been researching and imagining the lives of women past and present who have walked the streets our performance will be taking place on.” Vivkie Beesley

Lead artist and performance director for the production, Vickie Beesley, said: “It’s been really exciting uncovering some of the hidden history of Merchant City. We’ve been researching and imagining the lives of women past and present who have walked the streets our performance will be taking place on. We’ve taken inspiration from historical campaigners including Ethel MacDonald (who fought fascism during the Spanish Civil War), Mary Barbour and Helen Crawfurd (who campaigned in the rent strikes and as part of the peace movement during the First World War) and Jane Smeal (a prominent figure in the movement to abolish slavery).

“But less eminent women also make appearances, including women who received poor relief from the parish, a mum who gave birth to two sets of twins at Rottenrow Maternity Hospital, and two tipsy women waiting for a taxi. The Women’s Creative Company are a passionate, curious and warm-hearted group and it’s been a total treat for me to work with them. I can’t wait to share our performance with an audience.”

Glasgow’s radical history, and especially the role played by women activists, has generated considerable interest in recent years, including the commissioning of a statue of Mary Barbour and new historical enquiries into the life of Margaret Skinnider, a key participant in the 1916 Easter Rising.

The Women’s Creative Company brings together women artists from diverse age and cultural backgrounds, and was able to create the Hidden Footprints production with the aid of the Heritage Lottery Fund and Glasgow City Council.