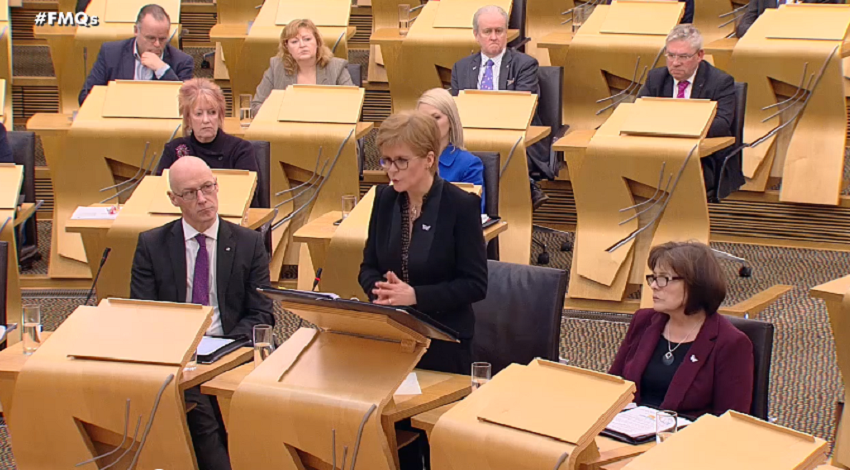 FIRST MINISTER Nicola Sturgeon has indicated her openness to a safety review of all student accommodation in Scotland, following the devastating blaze which engulfed a block of student flats in Bolton last week.

A probe into the fire – which saw hundreds of University of Bolton students flee their accommodation building and left two injured – is currently underway, with the focus expected to be on why the fire spread so rapidly to the upper floors.

Questions have since been raised over the the building’s safety regulations and whether the cladding in the building played any role, as it did in the 2017 Grenfell tower disaster.

While Greater Manchester Fire and Rescue Service, which has undertaken an investigation into the incident, has confirmed the cladding was not the same as that in Grenfell, it was this week revealed that ministers knew the type of cladding involved in the Bolton blaze – a form of high-pressure laminate (HPL) – could be dangerous, but refused calls for the government to force its removal.

At First Minister’s Questions today [Thursday 21 November], First Minister Nicola Sturgeon said the Scottish Government was “open” to such a review, saying there was “no room for complacency”.

Responding to a question from Scottish Labour education spokesperson Iain Gray, Sturgeon said: “The dreadful incident that happened last week is a further reminder that we cannot be complacent. If there is a feeling that there is a further review of regulations needed, the Scottish Government is very open to doing that.”

Responding to the first minister’s comments, NUS Scotland President Liam McCabe reiterated the union’s calls for a review, saying: “We very much welcome the commitment from the Scottish Government that they are open to reviewing regulations within student accommodation in Scotland.

“We believe that there is a need for a review, led by the Scottish Government, to ensure that all student homes across the country meet the highest safety standards. There is no room for complacency when it comes to student safety.”

In a letter to housing minister Kevin Stewart, McCabe raised particular concerns about privately-owned, purpose-built student accommodation, which often has no connection with a university or college.

McCabe wrote: “One of NUS Scotland’s priority pieces of work this year is to ensure proper protections are in place for those living in [purpose built student accommodation]. In light of the Bolton fire, we believe this work is now urgent. As such, we believe that the Scottish Government should lead on a review of the regulation of student accommodation in Scotland, with an immediate focus on ensuring the utmost safety standards are being enforced and upheld.”