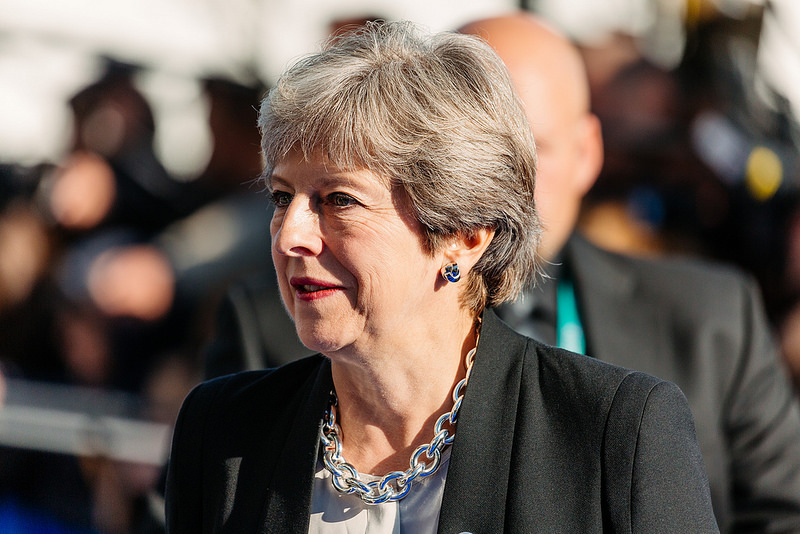 Delivering her big Brexit speech on Friday, the prime minister set out five tests for her Brexit negotiations

THERESA MAY has said she will bring the UK back together in her speech detailing the “hard facts” of Brexit, but her speech has been characterised by Nicola Sturgeon as a “wishlist plan already rejected by the EU”.

Speaking at Mansion House in London, May said now was an “important time” in Brexit negotiations, telling the audience: “We are leaving the single market, life is going to be different.”

Ruling out membership of the single market and the customs union, the PM also said Canada and Norway style trade agreements would not be favourable, saying a Norway style agreement would require a commitment to free movement which the UK Government is firmly against.

“We chose to leave, and we have a responsibility to find a solution.” Prime minister Theresa May

After a leaked memo from Boris Johnson suggested the UK Government was not committed to ensuring there was hard border after Brexit, Theresa May said upholding the Belfast agreement was at the heart of her negotiations, saying the UK would work with the EU to ensure no hard border in Ireland or within the Irish sea.

A key point of disagreement between the UK Government and Scotland is the “Brexit power grab”, with current EU controls over devolved policy areas such as fisheries being set to return to Westminster instead of Holyrood.

The nub. More detail, but no progress. A wishlist plan already largely rejected by EU. And even if it could be achieved, it would leave us with arrangements nowhere near as good as being in single market – and with no discernible upside. We can’t allow the Tories to take us there https://t.co/1Z1zsVWuep

Theresa May made no mention of this or other areas of disagreement between her government and the Scottish Government, despite “bringing the UK back together” being one of her five key tests for the outcome of negotiations.

Nicola Sturgeon won cross-party support in Holyrood on Thursday to introduce an emergency bill designed to sidestep Westminster by taking direct control over significant EU legislation – if such legislation is approved it is expected the UK Government will seek to challenge it at the supreme court.

CommonSpace spoke with the European Movement in Scotland and chair Vanessa Glynn said the PM’s speech was “wishful thinking” which ignored the evidence: “All the evidence, including the Government’s own analysis, is that you cannot leave the Single Market and Customs Union without doing considerable damage to the economy of the U.K. and Scotland.

“The EU has made very clear that they will not risk the integrity of the internal market by the sort of cherry-picking set out in this wish list.

“There are no solutions here to the concrete issues like how to avoid a hard, potentially violent, border in Ireland, how to achieve frictionless, tariff-free, customs between us and our European markets, how to ensure the UK can continue to trade in services with Europe- 60 per cent of our export earnings, nor how to staff our NHS, agricultural and tourism industries without expensive, bureaucratic hurdles.

“Business, citizens and EU partners will be rightly angry that even at this late stage in the negotiations our prime minister is still only able to produce meaningless generalities.”

“Time to stop this nonsense and let people decide if this car crash is what they voted for.”  Vanessa Glynn, chair, European Movement in Scotland

Glynn continued: “Scotland benefits massively from Freedom of Movement, barrier-free trade with the world’s biggest market, billions of EU investment across our communities and protections for our working conditions and environment.

“Scotland voted 62 per cent Remain and yet the level of engagement with UK Government has been derisory and the latest chapter concerning which powers will revert to Westminster and which to Holyrood simply underlines that.

“If Theresa May is sincere in these assertions she needs to change her attitude to Scotland’s very clearly expressed democratic wishes.

“Time to stop this nonsense and let people decide if this car crash is what they voted for.”

Jonathon Shafi, a Scottish independence campaigner who has been critical of the EU, told CommonSpace: “The Tories handling of Brexit has been cynical and chaotic. What is clear is that there is no agreed road-map for British capitalism. No one has any faith in the idea that today’s speech represents a unified approach to Brexit in the Tory party, never mind the country.

“The Tories will stumble on, each day bringing fresh difficulties, but as each passes, we get closer to the crunch point. They have done nothing to foster good faith with Scotland, who they have undermined at every turn.

“While I argue against EU membership  – the democratic deficit has never been more profound.” Jonathon Shafi, Scottish independence campaigner

“While I argue against EU membership  – the democratic deficit has never been more profound. The British state, therefore, faces multiple fronts, and its fragmented leadership lacks a strategy. This gets more obvious, as the statements from the Foreign Secretary get more ridiculous. But post-Brexit Britain is not shaping up in the image of Farage.”

He added: “In all of this is a huge opportunity for the left to make its presence felt. We can resolve the crisis on our terms – but that means opposing establishment institutions, and mapping out a radical alternative to Tory Brexit.

“That doesn’t mean building coalitions with the Lib Dems, or putting the likes of John Major on a pedestal. It means striking out with an agenda of our own – based on democracy, economic transformation and real internationalism.

“Whatever your view one thing is clear – the Tories are in a swamp. And today’s speech won’t get them out of it.”

Scottish Labour leader Richard Leonard said the Tories could not be trusted to “strengthen the Union of nations that make up the United Kingdom”.

Also speaking to CommonSpace, a spokesperson from the Scottish Independence Convention said: “As a total Tory Brexit Britain gets even closer, and as the powers of the Scottish Parliament come under threat from her Government, Theresa May has once again called for Brexit to strengthen the United Kingdom, while driving an ever-growing wedge between Westminster and the devolved parliaments.

“Westminster isn’t working and the mismanagement over Brexit shows that the current Government isn’t either.”