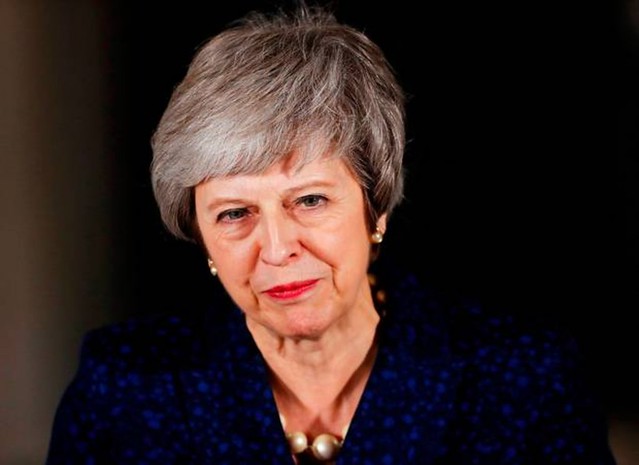 PRIME MINISTER Theresa May has refused to intervene in the lock-change eviction of 300 asylum-seekers in Glasgow by the Home Office contractor Serco.

At PMQs on Wednesday [18 May], May was challenged on this issue by SNP MP for Glasgow South West Chris Stephens, who said: “Tonight, campaigners will be meeting in Govan to discuss direct action against the Home Office contractor Serco who intend to make 300 asylum seekers homeless through their lock-change eviction program – many of whom have outstanding claims [as] asylum seekers. And as the Prime Minister will know, the Home Office can take 37 days to process Section 4 support.

“So will the prime minister intervene, stop these evictions, prevent a homelessness crisis in Glasgow, and respect live legal proceedings, so the law can be clarified in this regard?”

READ MORE: ‘Every person has a human right to housing’: Charities and activists launch last-minute attempts to halt Serco evictions

May gave no indication that she would intervene, responding: “We are committed to providing asylum accommodation that is safe and secure. We take the wellbeing of asylum seekers and the local communities in which they live very seriously. Asylum seekers who would otherwise be destitute are provided with free, fully furnished accommodation while their applications are considered, and we cover utility costs and provide a cash allowance to cover other essential living needs. But once a person’s asylum claim is fully determined, then their entitlement to that support will end.

The Scottish Refugee Council described May’s statement as an “inadequate response” on Twitter, warning: “The Home Secretary must recognise that Scottish legal process has not been exhausted on this. The Home Office must order Serco to stop.”

The Legal Services Agency also announced yesterday that, in addition to the several already secured, a further interdict has been granted at Glasgow Sheriff Court for a client threatened with eviction by Serco. They have encouraged anyone getting similar notices to get in touch.

Despite May’s characterisation of the situation, condemnation of the policy continues to grow. In a letter to housing minister Kevin Stewart, Scottish members of parliament, Glasgow City Council and representatives of the private sector, over 30 university workers from across Scotland and beyond today called for an “immediate halt to the inhumane eviction of asylum seekers in Glasgow”.

The letter states: “That a private company that has gained millions in pounds of public money can turn on the most vulnerable people in society, change the locks on their houses without a legal process and render them homeless sets an dangerous precedent that must be prevented.

“If we can legally stop Serco or Mears changing the locks on either or both the properties currently let to Serco then we will do so.” New Gorbals Housing Association deputy director Norman Fitzpatrick

“Glasgow has both a notorious record in terms of housing provision, and a proud history of ordinary people resisting eviction, destitution and victimisation of the most vulnerable. We call on the legal and political authorities, therefore, to choose and enforce the moral, humane and correct course of action and support the many individuals, asylum seekers, neighbours, community and tenant organisations determined to stop the eviction and destitution of people seeking asylum here.”

The New Gorbals Housing Association has also condemned the lock-changes, following the delivery of letters across Glasgow earlier this month by the Living Rent tenants’ union, calling on the city’s housing associations to speak out against Serco and the Mears group, who is taking over Serco’s contract to house asylum seekers.

The New Gorbals Housing Association has also promised to reverse any attempted lock changes and to not offer any properties to Mears when they take over Serco’s contract in September.

Confirming that it “remains opposed to the lock change regime,” New Gorbals Housing Association deputy director Norman Fitzpatrick told Living Rent: “I can confirm that 2 of our properties are currently let to Serco and that we will not be offering any properties to Mears when they take over the contract in September.

“In relation to those asylum seekers living in both these properties we would be happy to allow a transition period allowing them to stay in our accommodation on the expiry of the Serco contract should that be required thus avoiding destitution and allowing time for us to work alongside other relevant organisations to ensure that those individuals are referred to appropriate advice/legal services agencies.”

Fitzpatrick also confirmed “that New Gorbals Housing Association will not be offering Mears any properties when they take over the contract in September.”

“It is refreshing to see a Housing Association put their communities first and stand up for vulnerable tenants who are under threat from multinational companies. We call on other Housing Associations to emulate them, using their influence as social landlords to help prevent these inhumane lock changes.”

Previous responses to Living Rent’s letters from the Glasgow and West of Scotland Forum of Housing Associations on behalf of some members indicated that the organisations “understand and welcome the concerns expressed by Living Rent”, but claim that “the maintenance and repairs contracts a number of our members have with Mears are unrelated to the asylum seekers accommodation issue.”

A Living Rent spokesperson responded: “​While the provision of asylum seeker accommodation and the provision of maintenance and repairs may fall under different contracts, Housing Associations who hold maintenance and repairs contracts with Mears are nonetheless uniquely placed to pressure Mears to take on the 300 affected by the lock changes. We hope that Housing Associations across Glasgow will stand strong for their communities during this precedent-setting episode for tenants’ rights.”