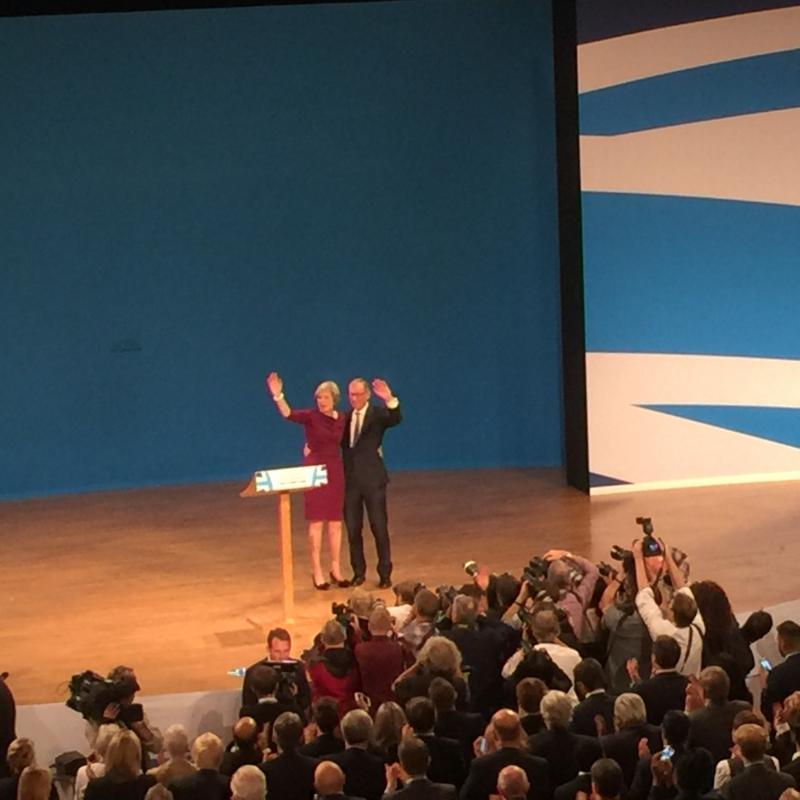 In her keynote speech to the Conservative Party conference in Birmingham, Theresa May said she would create a “fairer Britain” that is more equal, despite being slammed by critics for anti-migrant rhetoric during the conference

THE PRIME MINISTER lashed out at “leftwing human rights lawyers” and “divisive nationalists” as she made a pitch for what she described as “new centre ground” in her keynote speech at the Conservative Party conference on Wednesday.

In her keynote speech to the conference, Theresa May called for a “united Britain” said there was a “once-in-a-generation chance to change the direction of our nation for good” by tackling some of the long-term challenges faced in the UK.

May attacked “divisive nationalists” in her speech, and pledged to free the armed forces from the scrutiny of “activist leftwing human rights lawyers”.

She said the UK was “committed to a strong national defence and supporting the finest armed forces known to man”, adding: “And this week our excellent defence secretary, Michael Fallon, proved not only that we will support them with our heart and souls, not only will we remain committed to spending two per cent of our national income on defence, but we will never again in any future conflict let those activist leftwing human rights lawyers harangue and harass the bravest of the brave: the men and women of our armed forces.”

Theresa May told delegates that a “quiet revolution” had taken place in the UK as a result of the EU referendum, and said “everyone” would be given the same opportunities in her vision of Britain – despite heavy criticism over ‘anti-foreigner’ rhetoric from Tory politicians throughout this week’s conference.

May said: “I want to set our party and our country on the path towards the new centre-ground of British politics built on the values of fairness and opportunity where everyone plays by the same rules and where every single person – regardless of their background, or that of their parents – is given a chance to be all they want to be.”

“Genuine social reform means helping more people onto the housing ladder. It means making sure every child has access to a good school place.” Theresa May

May promised economic and social reform by saying that the government would be “on the side of ordinary working class people” by protecting workers’ rights and going after corporate tax-dodgers.

May said: “Rebalancing our economy is a start, but if we’re serious about overturning some of the longstanding injustices and barriers that stop working people from getting on, we need that economic reform to be allied with genuine and deep social reform too.

“Because a society that works for everyone is a society based on fairness. And only genuine social reform can deliver it.

“Genuine social reform means helping more people onto the housing ladder. It means making sure every child has access to a good school place.

“It means never writing off people who can work and consigning them to a life on benefits, but giving them the chance to go out and earn a living and to enjoy the dignity that comes with a job well done.”

The prime minister then turned on a “divided” and “divisive” Labour party and said it was now the “nasty party”.

In a speech where May said that Labour would “build barriers, we will build bridges”, she went on to say that Tories would fight for working class people.

“A country that is prosperous and secure, so every person may share in the wealth of the nation and live their life free from fear.” Theresa May

May said: “Giving them access to the opportunities that are too often the preserve of the privileged few.

“Putting fairness at the heart of our agenda and creating a country in which hard work is rewarded and talent is welcome.

May added: “A confident global Britain that doesn’t turn its back on globalisation but ensures the benefits are shared by all.”

“As home secretary, Theresa May supported every blow the Tory government dealt to families – from the bedroom tax and cuts to support for disabled people – and there is no sign that she will now reverse these policies.” Angus Robertson

“A country that is prosperous and secure, so every person may share in the wealth of the nation and live their life free from fear.

“That’s what I mean by a country that works for everyone.”

SNP Westminster leader Angus Robertson hit back at May following the speech, saying Tory policies were hitting the most vulnerable hardest.

“The prime minister’s words on building a fairer society will ring hollow to all those families who face stagnant wages, increased living costs, and rising inequality as a result of her government’s damaging austerity drive and divisive back-to-the-70s sink or swim policy agenda,” he said.

“As home secretary, Theresa May supported every blow the Tory government dealt to families – from the bedroom tax and cuts to support for disabled people – and there is no sign that she will now reverse these policies.”