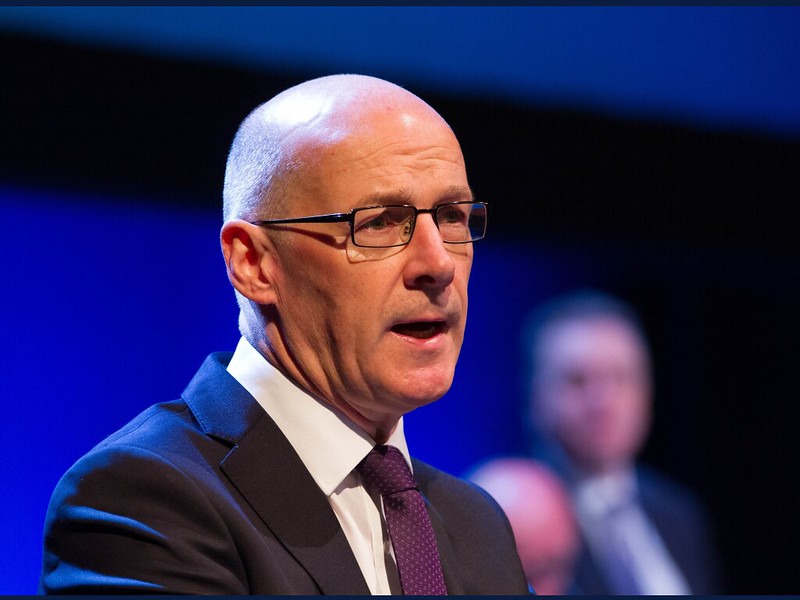 Swinney’s speech contrasted the “patience” and “hope” of the SNP and Scottish Government with Boris Johnson and Donald Trump, arguing that Scottish independence will be won on the high ground.

He told delegates: “In an age of alternative facts and fake news – of Donald Trump and Boris Johnson – we should make no apology for standing up for democratic human rights, for holding to a higher standard.

“While we deride their behaviour, we must learn the lessons of the victories of Trump and Johnson. They chose – and still choose – the gutter and it will be their downfall. Winning on their terms is never worth it.

“Their road does not lead to a better nation. Their road leads to ruin and we will never walk that road.”

Swinney argued that this approach, combined with the prospect of a No Deal Brexit which “will cost lives”, was already winning people over to the independence cause.

READ MORE: ‘Plan B’ debate rejected as Sturgeon confirms a Section 30 order will be sought in ‘a matter of weeks’

He said: “Faced with the choice between independence and the UK of Brexit and Boris Johnson, people are choosing independence. They are rejecting the lies of the populists and holding fast to the shared values of truth, integrity, honesty.

“Johnson and Trump choose lies and division. We choose to live as though in the first days of a new nation. They choose fear. We choose hope. And we will win. We will win our independence, and our better nation.”

Underlying this message of positivity was one which urged independence supporters to be patient – a request which, like similar entreaties from key SNP figures throughout the conference, may have been motivated by demands for a ‘Plan B’ on independence.

Such a plan would see the Scottish Government enter directly into independence negotiations with the UK Government on the basis of an electoral mandate, with a referendum. On the first day of the conference, a motion by SNP councillor Chris McEleny proposing a debate on the topic was rejected by members overwhelmingly.

Pointing to the results of a Sunday Times poll which this week indicated 50 per cent support for independence, Swinney told conference: “Step by step, we are winning the argument.”

Knowing this, he said, was making people “impatient”. “All of us – believe me,” he added.

He continued: “But there is no shortcut. There is no magic policy or political wheeze that can change the task ahead of us. One by one we must persuade our families, our friends and our neighbours of our cause.

“One by one. Step by step. It takes effort. It takes patient persuasion. And we can see that it is working.”

Swinney also used his speech as an opportunity to point out successes of the Scottish Government which he said was “already building the better nation we aspire to be”.

He cited the numbers of people from poorer backgrounds going to universities, low unemployment and crime, the introduction of new benefits, “world leading climate change legislation”, the expansion of early learning and childcare, and the extension of the Scottish Attainment Challenge.

Turning on its head a criticism which is often levelled at the SNP from the Scottish Labour Party, Swinney said: “The unionist parties […] care more about protecting the Union than they do about child poverty.

“We want independence to enable us to eradicate child poverty.”

Following an emergency resolution which was backed by SN members in support of Catalan independence leaders who were sentenced earlier today, Swinney also stated that he was “proud that our party will not stand by in silence” on the issue.