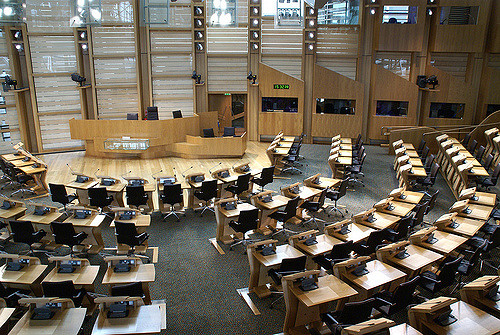 THE SCOTTISH PARLIAMENT has voted in favour of the Continuity Bill, the Scottish Government’s emergency legislative alternative to the EU Withdrawal Bill, by 95 votes to 32.

The result came shortly after news broke that the Welsh Assembly had successfully passed its own Continuity Bill. There is now a period of four weeks in which a legal challenge may be made to the UK Supreme Court in order to dispute the Continuity Bill’s legality.

Summing up before the vote, Michael Russell, Minister for UK Negotiations on Scotland’s Place in Europe and the Continuity Bill’s principal parliamentary advocate, struck a wry note, saying: “[Conservative MSP] Gordon Lindhurst described the actions I am taking with this bill as ‘having the whiff of anarchy and lawlessness’”. These were terms which Russell said he had “long aspired to.”

Providing the Scottish Government’s final statement in defence of the Continuity Bill, Russell dismissed arguments from the Tories that the Scottish Parliament should commit to the workability of Brexit instead of promoting a legislative alternative, saying: “There is no such thing as a good Brexit.”

Asked by Patrick Harvie asked if the UK Government has indicated any movement on changing their EU Withdrawal Bill to address the concerns of those backing the Continuity Bill, Russell did not indicate he had received any such update.

The final vote, which marks the culmination of the controversial and extraordinary bill’s legislative journey before reaching royal assent, was preceded by several hours of impassioned and sometimes hot-tempered amendment consideration.

These anticipatory votes saw the Scottish Conservatives’ so-called ‘Union guarantee’ – an attempt to ensure there would be no regulatory divergence between the laws and markets of those nations comprising the United Kingdom, which some in the SNP had accused of being a final attempt by the Tories to render the Continuity Bill unworkable or unacceptable to the Scottish Government – soundly defeated by 97 votes to 31.

In his defence of the amendment, Conservative MSP Adam Tompkins, who has been at the forefront of the Scottish Tories’ ongoing criticism of the Continuity Bill, reiterated his support for the Presiding Officer’s ruling that the bill fell outside of parliament’s legislative competence, and once again described it as a “bad law.”

“Competence is not a question of democracy – it is a question of legality,” said Tompkins, dismissing arguments that the Continuity Bill was supported by a plurality of the democratically elected chamber.

Tompkins suffered cross-party jeers when he spoke of the ongoing Brexit process and employed the phrase “taking back control” to describe its ultimate aim. Following Tompkins’ speech, Labour MSP Neil Findlay drew comparisons with the slogan’s most infamous articulator, saying that it is “always depressing to follow Boris Johnson.”

Findlay repeated his oft-spoken concerns, shared by Scottish Labour, that there had been inadequate scrutiny of the Continuity Bill due to the severe time constraints imposed by its status as emergency legislation, however he again confirmed that it would receive Labour’s “cautious support”.

Findlay went on to point out that the Secretary of State for Scotland David Mundell had promised several months earlier that the UK Government would make changes to its own EU Withdrawal Bill, in order to address concerns from the UK’s devolved legislatures, and yet no such changes had been made.

“It looks like it’s not only Scottish fishermen that have been deceived by the Tory party.” Labour MSP Neil Findlay

Highlighting that, despite their earlier rhetoric, Scottish Conservatives had voted against Labour amendments at Westminster which Findlay claimed would have protected the devolution settlement from the consequences of any post-Brexit ‘power-grab’, Findlay said: “It looks like it’s not only Scottish fishermen that have been deceived by the Tory party.”

Scottish Green co-convener Patrick Harvie MSP stated that, on the Continuity Bill, “I think parliament has done its job, fundamentally.”

Addressing concerns that the legality of the Continuity Bill will be challenged in the UK Supreme Court, a possibility raised several times of the course of the session, Harvie said: “I don’t think we should be here rehashing debates about competence… Frankly, if its competency is ultimately challenged, I want to see the Scottish Government defend it robustly.”

“Frankly, if its competency is ultimately challenged, I want to see the Scottish Government defend it robustly.” Scottish Green co-convener Patrick Harvie

Conservative MSP Murdo Fraser told the chamber that the Scottish Government’s position was motivated by “stoking constitutional grievance”, and encouraged all unionist MSPs to vote with the Conservatives, and to “stand against a second independence referendum,” which he characterised as the SNP’s ultimate aim.

Diverging from colleagues, Liberal Democrat MSP Mike Rumbles argued that the Presiding Officer’s ruling that the Continuity Bill fell outside of parliament’s competence could not simply be ignored, saying: “I believe the bill will be referred to the Supreme Court, and the likelihood is it will be found to be illegal.”

Rumbles argued the passing of the Continuity Bill under such circumstances would damage the reputation of the Scottish parliament, and he would therefore be voting against it.

SNP MSP Ash Denham argued that, judging by the legislative solutions it has proposed on Brexit, the UK Government either wanted to “roll back devolution, or simply doesn’t understand devolution.”

“It is the difference between devolution as we know it and an assault on Scotland’s parliament.” SNP MSP Ash Denham

Explaining why she felt the Continuity Bill was so vital within this context, Denham said: “It is the difference between devolution as we know it and an assault on Scotland’s parliament.”

The Scottish Parliament “really had no viable alternative” when faced the UK Government’s intransigence, said Denahm, and the Scottish Government had done what any “responsible” government would have done.

Describing the many dozens of amendments put forward by the Scottish Conservatives and largely rejected over the prior weeks, Denham said they were not intended to improve the bill, but “wrecking amendments, intended to derail it.”

“I’m glad that the Conservatives’ trivial, party-political games did not succeed,” said Denham, “because Scotland is watching”.