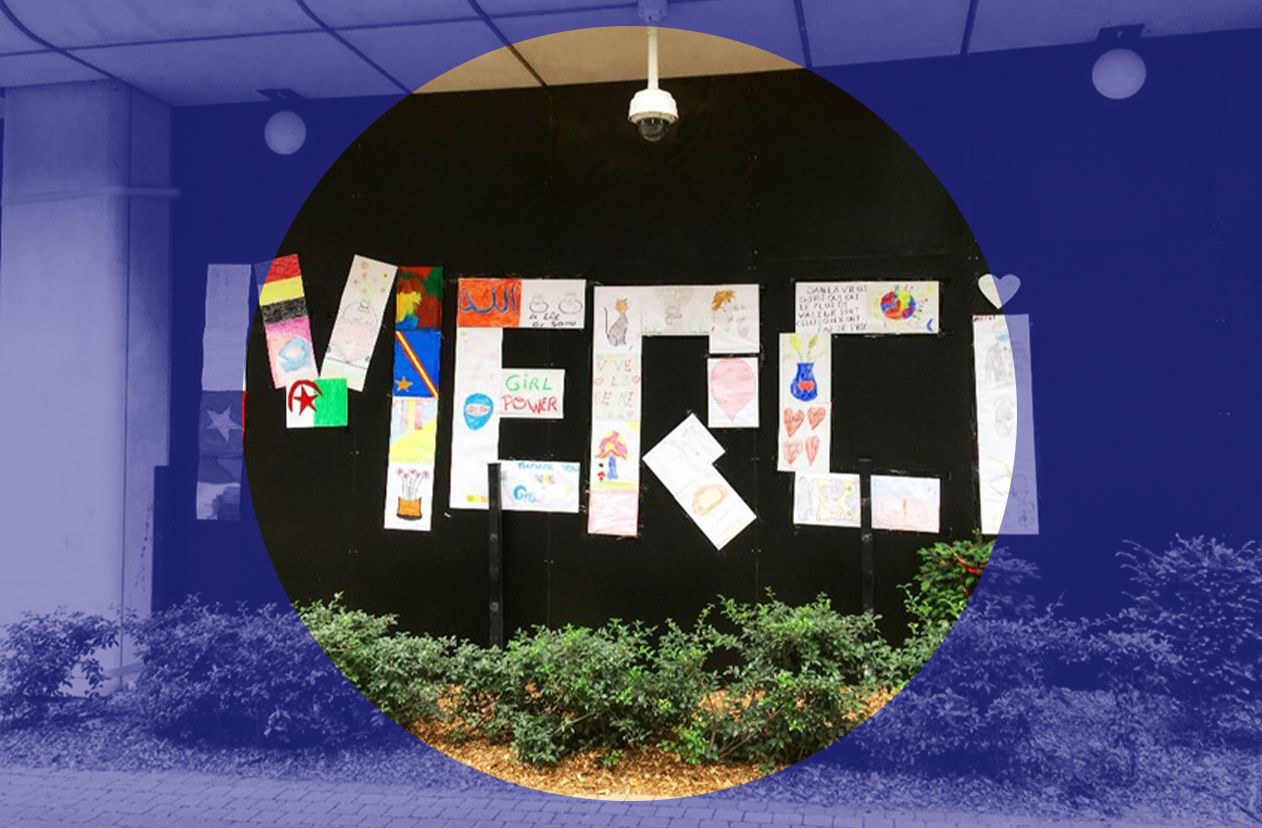 “This experience is an opportunity to reach out to those forgotten by the system and allow an essential feeling to resurface: human dignity.”

In April, during the lockdown, the European Parliament closed its doors and one of its buildings in Brussels welcomed a group of  women (homeless, migrants, but also victims of gender-based violence, and refugees). These are some of their stories.

The very sky was thrilled when high in air
The concourse raised right hands and swore their oath:-
Free shall the maidens sojourn in this land.
Unharried, undespoiled by mortal wight:
No native hand, no hand of foreigner
Shall drag them hence; if any man use force-
Whoe’er of all our countrymen shall fail
To come unto their aid, let him go forth,
Beneath the people’s curse, to banishment.

I SIT ACROSS from Valentine, the coordinator of the European Parliament’s temporary shelter for women, and I can gauge her fatigue, hidden behind her safety mask. The coronavirus pandemic is still ongoing and neither the summer, nor the end of the lockdown means we should stop being cautious, especially around vulnerable people.

Valentine talks fast. She strikes me as a very determined person, despite her workload in these difficult times. She describes what it means for  Samusocial – a municipal humanitarian emergency service whose purpose is to provide care and medical ambulatory aid to homeless people – to be housed in this building of the European district in Brussels (the Helmut Kohl building, Square de Meuûs 38/40): “It has increased the shelter’s quality in a way we have never experienced before; the building corresponds perfectly to what we would need in all our centers,” she explains.

The residents of the shelter are homeless women and victims of domestic violence. They need to rest, step back from difficult situations and find the energy to organize their thoughts and life, do their paperwork, take care of themselves and apply for jobs.

Valentine tells me that at the beginning of the lockdown, the Samusocial premises, like the Poincaré building in Brussels, were saturated, and that social distancing was impossible, with people crammed into bunk beds. The European Parliament contacted the Brussels-Capital region offices (which, later on, would inform Samusocial) to let them know their building and office space in Square de Meuûs was available. The procedure was arranged, and the transfer took place on 29 April.

One of the first stories ever told about navigation and exodus comes from Greek mythology: the Danaides, (daughters of Danaus, a ruler of present-day Libya) flee aboard a boat to escape a forced marriage with their cousins. The fifty young women left together and were welcomed with open arms by the inhabitants of the kingdom of Argos in Greece, who offered them protection. The story will end terribly (the expression, Greek tragedy, is rightly used) and contemporary imagination has only retained the dramatic end of the myth.

However, in the first part of this tale, we can imagine the history of borders and of the European project. The solidarity expressed through the asylum offered to these women invites us to reflect on why and how to shelter disadvantaged or vulnerable people in a more humane way and shows us that in ancient Greece, the cradle of the modern world, protecting human beings was crucial.

When the shelter offered by the European Parliament is finally ready to welcome its occupants, the first to settle down are about sixty women, previously tested negative for Covid-19. Very quickly, new faces show up, and every day, five to six women, victims of domestic violence, try to find a place at Samusocial. This  continued even after lockdown ended. Confined for several months with their oppressors, they searched for a place to protect themselves.

The walkie-talkie crackles. The security guard at the main entrance informs Valentine that the donations from the European Parliament have arrived. I discover that the parliamentarians and all the personnel provide for this shelter, and other Samusocial centers, clothing and other donations, as well as three meals daily. The office furniture was left the way it was in order for the on-site work teams to use. Shower cubicles were installed as well as a laundry room with six washing machines and dryers. But the efficiency of the parliamentary infrastructure does not stop here: as soon as a technical problem arises, a broken blind, a lock that does not work, “they come immediately to fix it,” Valentine explains with enthusiasm. The rooms are available for one or two people, according to Covid-19 requirements.

In terms of logistics, everything is put in place to avoid the conflicts and tension generated by overcrowded places. Here, very different profiles coexist: women victims of physical abuse and violence, women weakened by years of homeless life, drug and/or alcohol-dependent women, migrants. One of the residents is on her third request for residency and has been in that process since 2013. Two students, 18 and 20 years old, were also sharing a room and became friends; one of them is pregnant. At the shelter, there is also a resident that hugs every object that surrounds her. The beds, the chairs, everything goes. She does not take her medication regularly, but at least here, she is not in danger.

“She is with us because she does not fit in any box,” continues Valentine. Onn the street, she would be on her own, at the mercy of violence, misery, and now Covid-19.

The Danaids had the same father but came from different countries and represented a great diversity of populations between North Africa and Mesopotamia. Their strength came from their union, from their will to protect themselves, to find a shelter. Fleeing the coast of Libya, they crossed the Mediterranean towards the kingdom of Argos in mainland Greece. Today the Parliament has become that sanctuary. As heirs to the Athenian Dēmokratia and its Boulé, the assembly of citizens responsible for the laws of the city, the European Parliament welcomes and protects these contemporary Danaids who, like their predecessors, are trying to flee tragic or dangerous circumstances. Today there is no need to resort to the notion of fate, this fatality so dear to the Greeks and Romans, but rather to the idea of common responsibility.

While we were locked up in our homes in the first few months of the pandemic, the residents of the European Parliament building wrote a letter to the director of the Samusocial, Sébastien Roy, inviting him to come and talk to them. Emilienne was among the women present that day. She is from the Ivory Coast, and beyond the challenges and difficulties of a migrant’s life, she also suffers from health issues. Emilienne is diabetic and always thought that in Europe, she would get proper treatment. When I meet her, she tells me about her journey, her arrival to Belgium and that she regularly goes to a local church to pray. When she realized she had nowhere to go, she decided to hide in the church building, washed herself in the disabled facilities there and suffered from the cold winter weather. When they found her, she was in bad shape, and the team of Medecins du Monde that took care of her recommended a place at the Samusocial. That was back in 2015, when she was able to stay at the Schaerbeek shelter.

“It was my first time,” she says. Since then, she has lived in all the centers in Brussels: Poincaré, Petit Rempart, Botanique. When the pandemic started, she was in a room with more than twelve people. Some of them were coughing, and ambulances kept coming. She was afraid and had the feeling a lot of people were going to die.When Emilienne arrives at Square de Meuûs she is shocked and thrilled: the place was better that she ever imagined. She slept three days in a row, is no longer sick, and hardly feels her osteoarthritis, which has caused her awful pain in the knees.

In spring, when the president of the Samusocial seats in front of her, she decides to sing a thank-you song she wrote, together with her friends and roommates from the shelter. Emilienne sings about the coronavirus crisis. She talks about the miracle of what they all call by now “their five-star hotel.”

At the end of our conversation, the shelter’s coordinator tells me that this experience has changed the way many people work at Samusocial. The way the organization establishes its priorities and strategy, mobilizes its resources and evaluates its tasks and projects. Valentine tells me about how things were perceived before, in particular about the desire to avoid welfare  and social assistance dependency and dependency on welfare at all costs. “People were welcome, but you were not supposed to get too comfortable for you to bounce back.”

According to her, this vision is outdated. “The comfort of the premises is going to help people and allow them to take a moment, breath, recover, and start all over again. The reality is that people stay even when the living conditions are catastrophic because they have nowhere else to go, no other option”.

There is the symbolic and yet real weight of the suitcases the residents from other shelters had to take with them every morning before being allowed to check in again at the end of the day. Like the woman who told the neighbors that the shopping trolley she was dragging everywhere was “for groceries.” Valentine says that since the European Parliament experience, the staff works in better conditions and can help and support residents more effectively. “I am convinced this is a win-win situation. Things should always be like this”.

The convention signed between the  Samusocial and the Parliament stipulates that the women had to vacate the premises at the end of August and even if the changes imply difficulties in terms of logistics and are real benchmarks for the residents, a new place was found. The new shelter is now situated in Molenbeek and is a former nursing home.

Before leaving the premises, I have a look at the cafeteria and stumble upon works created by the residents during a creative workshop organized by Samusocial. These are collages, drawings, aquarelles that reveal theses women’s dreams, portraits full of poetry. I dwell a bit on some of the profiles that have a story written on them. These are beautiful tales, sometimes sad but full of kindness.

During this pandemic, the European Parliament had seized the opportunity to reconnect with people when they needed it most. The European Union is often the subject of criticism, and the crisis of politics and political representation harms institutions. Perhaps one of the answers is to be found here, in this refuge that, as the city of Argos, has highlighted the value of hospitality and reconnects with reality. Through this expression of generosity, the EU has been able to develop a more direct and more human approach in the midst of a health crisis. This experience is an opportunity to reach out to those forgotten by the system and allow an essential feeling to resurface: human dignity.

Anaïs Ortega is a PhD researcher at the Faculty of Political Sciences and at the Institute of Social Sciences of Religions (ISSR) of the University of Lausanne. This article was written within the framework of her work at the INTER PARES project, funded by the European Union and implemented by the International Institute for Democracy and Electoral Assistance (IDEA).