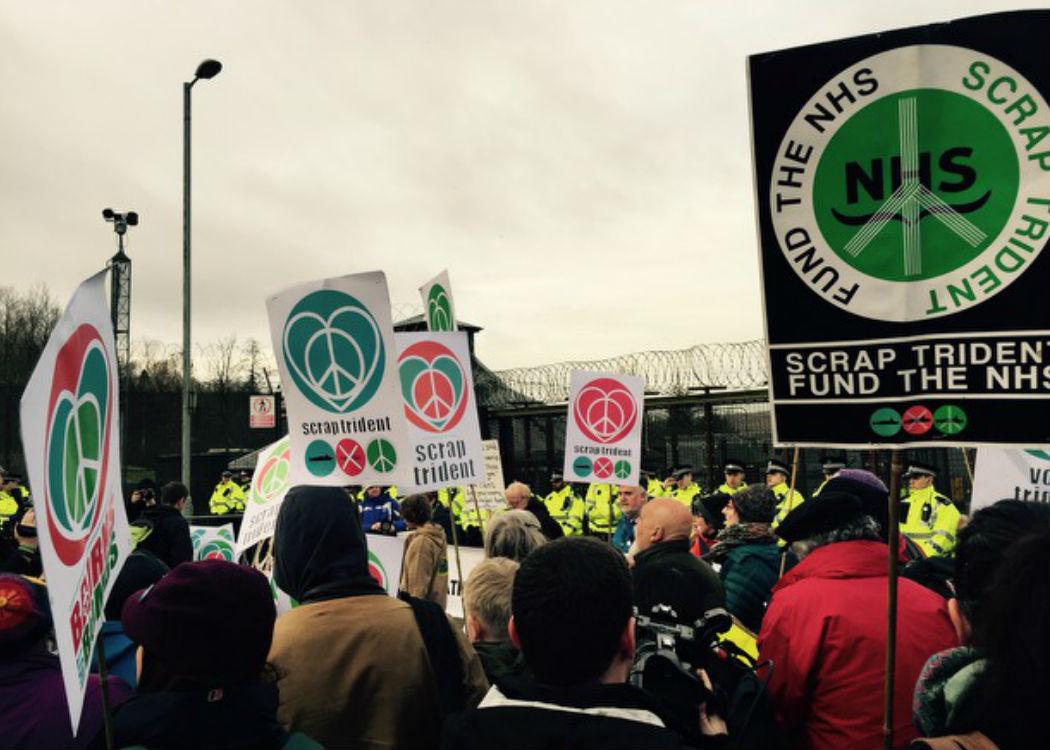 THIRTY-FOUR people have been arrested after protesters staged a blockade at Faslane Naval in opposition to nuclear weapons.

The Bairns not Bombs demonstration, organised by the Scrap Trident coalition, gathered outside every entrance to the facility in order to stop work taking place.

Some protesters locked on to each other using locking equipment which required Police to yse special cutting equipment.

Workers who had turned up were sent home from the base, situated on the River Clyde in Helensburgh, which is home to the UK’s nuclear arsenal.

Police Scotland confirmed that they made 32 arrests while the Ministry of Defence forces based at Faslane had made a further two.

The Trident nuclear system is due for renewal with the ‘main gate’ decision pencilled for 2016. It will cost the UK taxpayer PS100bn over its lifetime.

The SNP has stated it will never vote for Trident renewal, and the party may have a critical say in the next government if the Labour party is reliant on SNP votes in order to form a government.

Among the anti-trident protesters was co-convener of the Scottish Green Party, Patrick Harvie.

Brian Larkin, a spokesperson for the Scrap Trident coalition said that the main entrances were blocked from 7am until 1.30pm today [Monday 13th April].

“Our intention was to shut down the base and we successfully achieved that, despite a massive police presence,” said Larkin. “The other intention was to raise the profile of the issue of trident in the context of the General Election.

“We want to say to people that we have the best opportunity that we’ve ever had to actually stop nuclear weapons by returning a raft of anti-Trident candidates.

“A very wide range of people took part. From students to pensioners, to families with small children. This truly was the bairns not bombs demonstration.”

Jonathon Shafi, co-founder of the Radical Independence Campaign, said: “It’s no coincidence that this is the most successful blockade of Faslane for years because the current political context around Trident is fertile ground for the peace movement. It is an issue which is central to the election meaning that the opportunity to win the argument for disarmament is clear.

“Huge challenges are to come, but as calls for welfare not warfare intensify, UK imperialism could lose its weapons of mass destruction.”