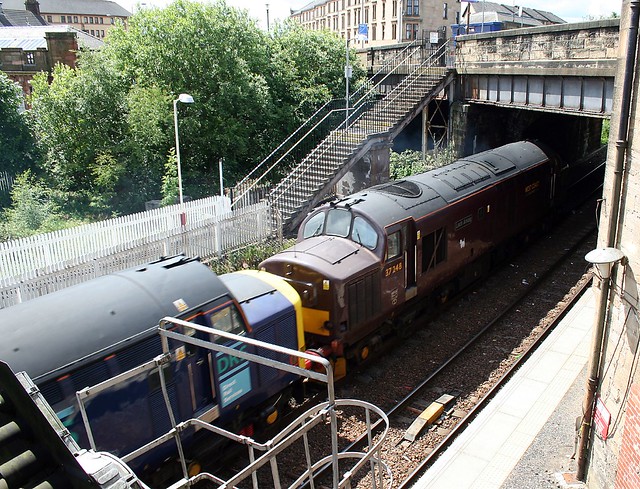 TRADE UNIONS will today rally in defence of the historic Springburn rail depot during its final day of operations, as it faces closure after 160 years.

In December 2018, in what RMT described as a “wanton act of industrial vandalism”, Gemini Rail Services announced the closure of the Glasgow rail yard, at the cost of almost 200 jobs. Gemini have claimed closure is required due to a decline in the circulation of old rolling stock normally serviced at the facility.

The entire depot – where once maintenance, repairs, upgrades and overhauls were performed on the entire ScotRail fleet – will be gradually closed by 2020, but today [26 July] marks the final day of operations at the St Rollox ‘Caley’ site, where members of RMT and Unite the union will assemble in protest outside of the gates.

RMT general secretary Mick Cash said: “The closure of the Springburn Rail Depot in Glasgow is an act of industrial vandalism that will not be forgotten and RMT is mobilising for the broadest possible support for Friday’s demonstration.

“We are calling for a big turnout to ram home the message that Springburn and its history will never be erased and to demand that the option of nationalisation of our railways to stop this wanton destruction be placed centre stage.

“This is just another example of the fragmentation of the privatised rail industry where prime assets are passed from one speculative owner to another and mean that a proud railway nation like Scotland loses a key engineering resource at the stroke of a pen regardless of the consequences for jobs, training and the local economy.

“It is an absolute disgrace.”

“If there is no urgent intervention by the Scottish Government then this will be the last day of a long and proud 163 years history.

“However, we still believe that if there is the necessary political will then this doesn’t need to be the case.”

Unite Scotland secretary Pat Rafferty paid tribute to those involved in the campaign against the site’s closure, and emphasised that there was still hope for the depot: “The Rally Roon the Caley campaign has been an extraordinary example of a group of skilled and determined workers coming together to fight for their jobs, and jobs for future generations. Everyone involved in the campaign must be congratulated for their efforts in bringing so much press and political attention to save the depot.

“The last train from the current schedule of works will leave on Friday but we have not given up the fight to retain a successful future for the site – not by a long shot. Unite has no intention of going away quietly and we firmly believe that the future of the rail depot can be secured with the necessary political will.”

In April this year, the Scottish Trade Union Congress (STUC) wrote to FIrst Minister Nicola Sturgeon, calling on the Scottish Government to take Springburn into public ownership, but their entreaty was unsuccessful.

Scottish Labour leader Richard Leonard said: “There are only a few days left to save the future of railway engineering in Scotland – there is no time to waste.

“The Caley rail works is a national asset, and the SNP government should be prepared to step in and take it into public ownership to secure its future.

“It’s unforgivable for Nicola Sturgeon and the government she leads to sit in silence as the depot is set to close.

“The workers, their unions and the wider Labour movement must be heard, and we will use our voice to demand the Caley remains open.

“There is still time to save it, and the SNP government should act immediately to do so.”

“This is just another example of the fragmentation of the privatised rail industry where prime assets are passed from one speculative owner to another and mean that a proud railway nation like Scotland loses a key engineering resource.” RMT general secretary Mick Cash

SNP MSP for Glasgow Maryhill and Springburn Bob Doris defended the position of the Scottish Government, but said that efforts are still underway to return railway engineering to St Rollox through Scottish Enterprise.

Doris said: “With no order book and no practical way under current rules for the Scottish Government or Scotrail to direct work to the Caley, it was always going to be a tough ask to save ongoing operations at the St Rollox site.

“Thankfully most workers appear to have secured alternative employment.

“That said, it remains hugely disappointing and a blow to Springburn that a Rail Works with a proud history closes its door today.

“However the work of the stakeholder group I requested the Scottish Government to establish must continue and Scottish Enterprise has been working hard to attract commercial interest to return railway engineering work to St Rollox.

“I hope we will see the doors re-open in some form and a proud industry return to Springburn.

“In doing so we need to look at ways of fundamentally reforming the railway sector to ensure that if and when jobs return they are sustainable and that the Scottish Government has a meaningful way of offering strategic support.”

Addressing the closure, a Scottish Government spokesperson commented: “It is clearly very disappointing that Gemini Rail commenced closure of the Springburn works and this is a very concerning time for the remaining staff and their families.

“The timescale Gemini Rail set as part of the statutory consultation process was too short and did not allow a meaningful review of options for the site.

“However, despite our representations, Gemini has refused to postpone the closure.

“No other business in the rail sector has expressed solid interest in the site in its current form, that is why Scottish Enterprise is doing all it can to look at the potential of repurposing the site to ensure a sustainable future.

“We will also do everything we can to support affected workers through PACE employee support.

“A number of staff have already benefited from this and taken up employment opportunities at other rail workshops in Scotland.”