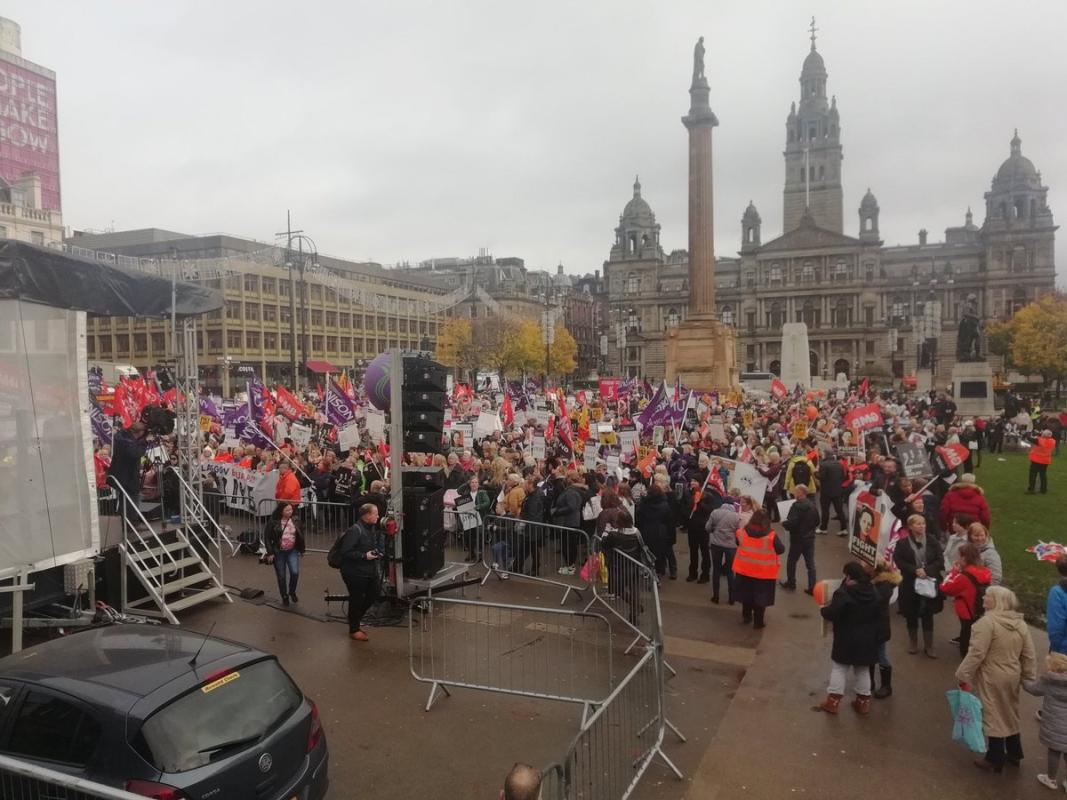 Nicola Sturgeon said she had “nothing but admiration for the women involved”, and placed the blame for the strike at the door of previous Labour Council administrations

The 8,000 GMB and Unison members on strike brought primary schools and care services to a standstill with picket lines across the city, with one specifically attracting the attention of the police after Glasgow City Council managers called them in.

The strikers marched in large numbers from Glasgow Green, through the centre of Glasgow, congregating in George Square in front of the City Chambers.

The long-running pay dispute began in 2006 when the then Labour-led council introduced a new pay review scheme – Workforce Pay and Benefits Review (WPBR) – which led to female-dominated roles such as carers and cooks being payed up to £3 an hour less than male-dominated roles of equal value, such as rubbish collection. WPBR has been challenged by council staff since 2009 and was ruled inappropriate by the Court of Session in August 2017.

The unions say this week’s strike is over a lack of significant progress made toward the negotiated settlement promised by the council when the SNP took control in May 2017.

The strikers are demanding an end to the gender pay discrepancy, and re-payment for the years of work completed at a lower rate of pay than their male colleagues. The cost to Glasgow City Council of agreeing to the strikers’ demands has been estimated at £500m-£1,000m.

Susan is a learning support worker from Toryglen says that dispute over equal pay should have been resolved a long time ago. #GlasgowWomensStrike pic.twitter.com/WWq970qPqS

Glasgow City Council leader and SNP councillor Susan Aitken was the target of much of the criticism owing to her recent comment that the strikers did not know what they were striking for, and that it would delay the process of reaching a settlement by taking strike action.

First Minister Nicola Sturgeon posted a message of support to the strikers on twitter and placed the blame for the issue on to previous Labour administrations.

While I wish the strike wasn’t happening, I have nothing but admiration for the women involved. However, I feel contempt for a Labour Party expressing solidarity now when, in power, they took these women to court to deny equal pay. @theSNP and @SusaninLangside are working to fix. https://t.co/nbUt33HWgE

Equal pay for women, not party politics, was the clear message from both strikers and union leaders. Lynn Henderson, STUC President, emphasised that the demand from the strikers was clear, to achieve “what rightly belongs to women workers: equal pay”. Henderson also rejected the idea that the strike was drummed up by union leaders instead of a workers’ led movement, stating “It is you, the women, the workers, who are the union”.

GMB Regional Officer Rhea Wolfson, who is also a candidate for Labour at the next Scottish elections, called for the council to listen and engage in meaningful negotiation with workers rather than attempt to come to a solution behind closed doors.

Shona Thompson, GMB Branch Secretary, identified the need to be heard as the main reason for the strike action.

“We are here today because that’s what it has taken for this City to hear us,” she told the strikers, saying their demands were: “No more, or no less than what we are owed.”