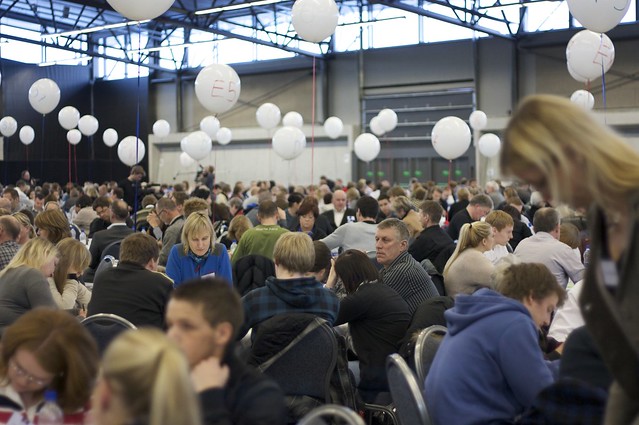 Thomas Swann (@ThomasSwann1), research fellow at Loughborough University, says Iceland’s National Gathering in 2010 was ultimately a case study in how Citizens’ Assemblies can fail, and thus has many lessons for Scotland as we embark on a similar democratic experiment

AT THE end of April, Nicola Sturgeon highlighted the role of a Citizens’ Assembly in moving Scotland towards independence. She stated that this would be made up of a ‘representative cross section of Scotland’ and would be asked to consider the kind of country Scotland can be.

Citizens’ assemblies aim to bring together randomly-selected members of the public to deliberate on a specific topic. Typically, these assemblies are run by trained facilitators and are presented with expert evidence on the topic they are there to discuss. They are asked to deliberate and agree on a proposal on the issue they’ve been assembled to deal with, with these proposals going on to inform government legislation or being put to the population in a referendum.

One of the most important recent examples of a citizens’ assembly is the Irish example, where the 2016-17 Citizens’ Assembly paved the way for the referendum in 2018 that saw abortion legalised. Prior to this, the 2012-13 Constitutional Convention, a similar body, led to the legalisation of same-sex marriage. It is the example of Ireland that Sturgeon credits as inspiring the turn towards a Citizens’ Assembly for Scotland and, as she points out, it shows how consensus can be reached on contentious issues.

Another place where an assembly of this sort has been used and which may have as much if not more relevance for Scotland is Iceland. The 2010 National Gathering in Iceland was organised similarly to the Irish Citizens’ Assembly and was tasked with defining the core values of Iceland. The results then fed into a redrafting of Iceland’s constitution, undertaken by the Constitutional Council, a group of 25 elected directly by the population. This Council put together a new constitution for Iceland, based in part on the values determined by the National Gathering. The Council also opened the process of writing the new constitution up to members of the public, who through social media could observe many of the Council’s meetings and respond to draft sections published online. This participatory element has given rise to the constitution being labelled a ‘crowd-sourced’ constitution. While passing a referendum in 2012, the new constitution was ultimately rejected by Iceland’s parliament.

In looking at how a Citizen’s Assembly might operate in Scotland and the role it might play in independence, it is important to look at the Icelandic case, both because of the context in which it emerged and the reasons for its ultimate failure.

Like the proposed Citizen’s Assembly for Scotland, the Icelandic constitutional process was designed to provide a new foundation for the nation. The 2008 financial crash resulted in a collapse of Iceland’s banking sector and a significant drop in living standards. It was also experienced as a profound existential crisis for the country. The authority of the financial and political establishment was undermined, and it was deemed necessary to reimagine what the collective entity of the Icelandic people stood for and what values they held in common.

Following the 2008 crash, many in Iceland saw themselves in opposition to the political and financial class. How political and financial institutions functioned had to change to reflect the needs and desires of the people. In many ways this was a classic populist framing, and the National Gathering and Constitutional Council were seen as mechanisms through which the people could assert their vision for Iceland in opposition to the elite. Many of the changes in the new draft constitution, such as methods for instigating legislative referenda and redefining control over natural resources, were part of rebalancing power in the country in favour of the people.

READ MORE: What the Yes campaign can learn from Iceland, Occupy and anarchy

In the end, it was this opposition that undid the work of the National Gathering and the Constitutional Council, with the political and financial establishment, by 2013, recovering somewhat from the loss in authority after the crash, reasserting their control and rejecting the new constitution in parliament.

So what can we learn from the Icelandic example?

Crucially, we need to recognise how important the political rupture following the financial crash was for making the process possible in Iceland. If the nation, as a community of people, is to assert its control over its own future, then wrestling the initiative and political power from established interests is essential. For Scotland, this means identifying the historical and structural conditions that define political and economic power. Without effectively challenging them, a Citizens’ Assembly or anything like it will be essentially powerless to bring about real social change. If the moral authority of the Catholic Church in the Irish case hadn’t been shaken by years of scandal, would the constitutional changes we’ve seen have been possible?

Such a process of giving the people of a country real control over their lives and over the nature of the community they want to be part of needs to embrace this opposition between those who hold power and those who do not. For a Citizen’s Assembly to be truly transformative of people’s lives, it needs to be able to fundamentally change the fabric of society. While it is correct to put such a process above political party oppositions, it is wrong to attempt a compromise between the various interest groups in society and try to find a common ground, for this will always mean the people ceding control to elites. If Scotland is to be shaped by the people who live in it, then those people need to be the ones making the decisions about what it looks like in the future.

On a practical level, this means three things for a Citizens’ Assembly.

First, it must not be a site of compromise between elites and the people but a place where the people can define their desires and needs for themselves. Even though compromise might make some kind of resolution easier, it can be questioned whether such a resolution reflects the will of the people rather than of the elites.

Second, it must have the capacity to enforce constitutional change, subject to referenda, rather than merely proposing measures to a government that can decide whether or not to implement them. Ultimately, there must be a way of ensuring that the fate of the Icelandic constitution is not replicated in Scotland.

Third, it must be genuinely reflective of the people who live in the community. Citizenship as a formal legal status excludes many who are part of the community of a place, but for whatever reason – immigration status, age – do not meet the criteria to participate in its democracy. The Scottish Government has shown a willingness to extend political participation both to those previously considered too young and those who live in the place but are not formal citizens. This must be a part of any Citizens’ Assembly, and the voices of minority groups must be heard, perhaps by over-representing minorities in the make-up of the assembly.

Common Weal is currently supporting research that looks at how a participatory democratic process like a Citizens’ Assembly can be genuinely inclusive of the people who live in a place and effective in bringing about social and political change. The first part of this research is a survey, open to anyone living in Scotland. If you want to take part in discussing how participatory democracy can work in Scotland, please take ten minutes to complete the survey, which can be found here.

Donate today to fund the media YOU deserve