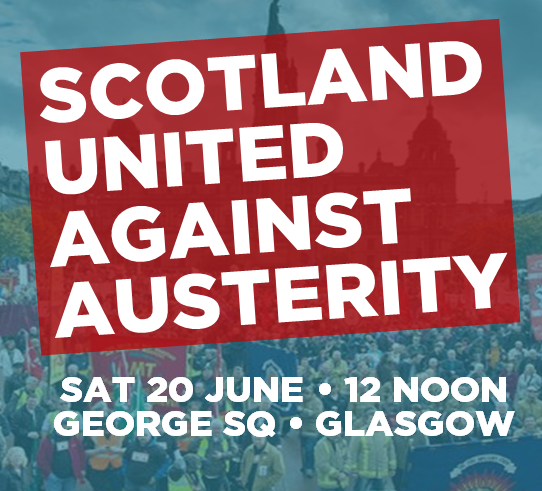 THOUSANDS are expected on Saturday in Glasgow’s George Square for a rally against austerity, with organisers saying buses are booked from all parts of Scotland.

The demonstration is set to coincide with a march in London organised by the Peoples’ Assembly, which is expected to be the largest anti-austerity gathering since cuts began in 2010, with upwards of half a million thought to be heading for the UK capital.

The STUC, the main organiser of the event in Scotland, told CommonSpace that they are confident of an “excellent turnout”.

The demonstration comes after the Tories won a shock majority government in the General Election in May, and are expected to plough ahead with manifesto commitments to PS30bn of austerity by 2018, including PS12bn in cuts from the welfare budget.

The figure amounts to twice the amount of cuts than has already been delivered in the previous five years, with the axe falling more on revenue spending – existing services – rather than capital spending – new infrastructure projects like bridges and roads.

Anti-poverty campaigners have warned that the welfare cuts could lead to mass hunger and destitution.

The Scottish Government’s block grant is also facing a severe reduction, with cuts over PS100m set for the 2015/16 budget, on top of the 20 per cent reduction in Holyrood’s annual budget since 2010.

Local councils in Scotland are facing particularly harsh pressures, with Glasgow City Council announcing on Friday that further cutbacks of PS100m from 2016 to 2019.

One of the co-sponsors of the demonstration is the Radical Independence Campaign (RIC), and Cat Boyd, RIC co-founder, will be addressing the rally, and told CommonSpace that the demonstration must be just the start of “sustained” resistance to cuts.

“Ordinary people in Scotland cannot take another five years of Tory rule and we must use every tactic we can to fight this government,” she said. “This government is more extreme than Thatcher; when they are finished there will be nothing left of the welfare state.

“For every single ordinary person in Scotland the question is – can you afford to stand by and watch this Tory destruction? Or will you be part of a movement that faces them down? It’s time to mount the biggest ever challenge to the status quo. It begins on Saturday.”

Grahame Smith, STUC general secretary, is expected to say to that a clear message to “Westminster and Edinburgh” has to be sent that “we refuse to accept that there is no alternative to austerity”.

He will add that the trade union campaign against austerity will be “political and industrial”, warning that they will throw their weight behind strike action if that is what trade union members “believe to be most effective”.

Other speakers for the demonstration include Kirsteen Fraser from the SNP Trade Union Group, Denise Christie from the Labour Party’s Campaign for Socialism and Jeanne Freeman from Women for Independence.