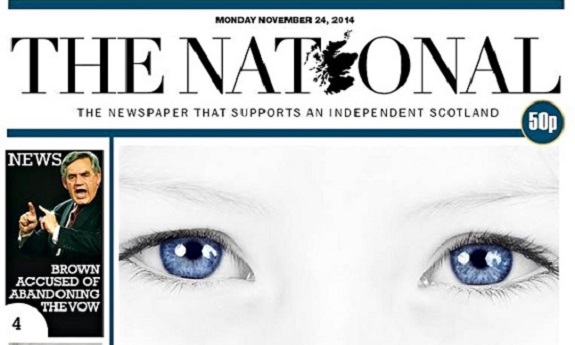 Marking three years of The National, editor Callum Baird answers some of the most common questions about Scotland’s daily indy newspaper

THE National is three years old today. Most of the pundits in Scotland’s unionist media said we wouldn’t last till Christmas. We’ve proven them wrong – so far. But how long that continues is now up to you.

Over the past 12 months, we’ve been on the road with our National Roadshow, bringing the newspaper and our team to towns and villages across Scotland, hosting events and meeting Yes groups.

We’ve spoken to thousands of our readers. And we’ve realised that many people in the independence movement share the same concerns about The National and how it’s run. So we thought we would try to address the most common questions here.

You are published by Newsquest … why should we give them our money?

The truth is that it would be incredibly difficult to launch a successful daily independent newspaper today without the backing of a large publisher. The fact that we are part of a big media company allows us to benefit from shared resources, like a printing plant, photographers, a circulation department, an advertising sales team – all of which an independent newspaper would have to pay a premium to use.

In reality, Newsquest doesn’t have a political view. It doesn’t back independence, or the union. Otherwise, it would never have allowed the Sunday Herald to come out for Yes, or decided to launch The National.

Not once, in three years of the paper, has anybody ever told us what we can and cannot publish in The National. The owners of certain other newspaper companies in the UK are not quite so hands-off.

But they could pull the plug at any minute?

Well, yes. But they won’t, as long as we’re financially viable. The only time Newsquest will ever get involved in The National is if enough people aren’t supporting the paper. So long as our readers keep buying us every morning, we’ll be there. More on that later.

Aren’t you part of the same company as The Herald?

Yes, we are – along with 20-odd local newspapers and several magazines like the Scottish Farmer. But we run a completely separate operation.

But is our money going towards The Herald?

No, we’re in a completely separate financial line. Decisions are made for each title based on the performance of each newspaper, and The Herald will sink or swim based on its own performance. As will the Greenock Telegraph, the Evening Times, the East Lothian Courier, or any of the other Scottish newspapers in our company.

I can’t get hold of a copy. What’s wrong with your distribution?

We know we have a major problem here, and there are several factors which contribute to it.

First, The National – unlike most other papers – is a pan-Scottish title that doesn’t have a natural geographic base (for example, like The Herald has in Glasgow or the Scotsman in Edinburgh).

We’ve got to be in all 4,500-odd shops, which means we need to spread ourselves thinly to make sure there are enough copies in every outlet.

Second, the newspaper is often either hidden or tucked away. That’s partly because we’re the new kid on the block and are shunted to the back or put on the bottom shelf away from the more established papers.

Third, there is no doubt – this is the single biggest complaint we hear – that we are also being deliberately hidden behind the unionist papers. It might be members of the public who come in and stick them under the Daily Mail or the Express.

Unfortunately, without us checking every shop every day, there’s not a lot we can do about it. (And thanks to all of you out there who I know fight back to make sure we get a decent selling spot).

Quite why unionists are threatened by ONE daily newspaper when they’ve got all the rest of them, we don’t know.

How does the distribution system work?

If a shop sells out one day, it is then allocated extra copies on that day the following week. If there are a large number of copies left unsold, the shop’s allocation is cut. It is an automated system (it would be impossible to manually control the number of copies going into to 4,500 shops on a daily basis).

One major problem is that the number of copies we sell is very volatile. For example, in one shop on any given week we might sell:

In order to make sure we definitely have enough copies available, we’d need to have at least 14 (the maximum we’re likely to sell plus one) in there each day. Over the course of those five days, we’ll have given the shop 70 copies, sold 34 and wasted 39. That doesn’t make economic sense, so we need to make tough decisions based on average sales, rather than the absolute maximum. This can lead to the newspaper occasionally being unavailable.

How are sales anyway?

We had a brilliant first six months to the year – our circulation was up on the previous 12 months, which is pretty much unheard of in newspapers. But since the General Election result – and the perception, at least, of it being a setback for independence – our sales have taken a huge hit.

The brutal truth is that we have lost close to a fifth of our print readers since a high point in June. We have a good solid number of digital subscriptions which is increasing (nearly 5,000), but our readers need to be clear that the printed newspaper will ONLY exist as long as people keep buying us, and buying us regularly. There have been occasions this summer when we’ve lost an average of 300 readers from one week to the next.

So what can we do about it?

The best thing you can do is put in an order with your newsagent and make sure you get a copy of the paper EVERY day.

We’re hoping to introduce a subscription soon for the printed edition, but until then we need our readership to make sure they pick up a National as a matter of routine. And to make sure that other people in their local Yes groups and party branches, who might not be regular readers, know how important it is to keep The National going.

But isn’t The National just preaching to the converted?

It’s true that our readership is probably mostly made up of Yes voters. But a newspaper can reach people in other ways – for example, when our stories are followed up by other news outlets.

Half a million people visit our website every month. Our front pages are seen by hundreds of thousands of people online, on social media and in shops, and articles from The National appear in the timelines of around a million people on Facebook every week.

We also support a community of pro-independence writers and columnists by paying them to contribute to The National. Paul Kavanagh (aka Wee Ginger Dug) says that it’s his income from writing his columns in the paper that allows him to be able to blog full time and tour Scotland visiting Yes groups.

Why isn’t there more advertising?

This is another major problem for us. Businesses say they are spooked by the independence thing, because they think The National is too political to be associated with.

It’s fine, of course, to advertise in the unionist newspapers. Funny that. Yet we have a readership that you can’t reach in any other newspaper. We need pro-independence businesses to help us buck the trend. Get in touch!

You don’t call out the media/BBC enough!

Of course, we will hold them to account when we need to. And there are plenty of people in the independence movement doing that already – The National is an alternative to the unionist media, not a watchdog.

I really don’t like those front pages you do

The front page gets us noticed and gets people talking about us. Those that are a bit more ‘out there’ and are more strident are inevitably shared more online and then sell more copies.

Of course, we’ve made a few mistakes over the past 900-ish editions – you can’t get it right all of the time. But we’re learning.

I bought The National when it started but stopped

Try it again. We’ve changed a lot since the launch. Don’t forget that there were only four weeks between the idea first being pitched and the newspaper arriving in shops!

We’ve got around 22 regular columnists and two cartoonists. You’re not going to like all of them.

In fact, if you did like all of them, we wouldn’t be doing our job properly. And besides, it’s healthy to disagree with writers. Some of the newspaper columns we enjoy reading the most are the ones which make us really angry.

Then we’re probably never going to win you over. But wouldn’t you agree that it’s better to have at least one daily pro-independence newspaper than none at all?

If the Yes movement doesn’t get behind us, then we’re right back where we started – with ALL of Scotland’s mainstream media against us.

The National is put together by a small team of around 10 to 12 people every day. We all believe passionately in independence for Scotland, and although another referendum isn’t going to happen in the next few months, it is coming soon.

We need you to make sure we’re around to report on the campaign. And to be in the newsstands on the day Scotland votes for independence.

Picture courtesy of The National