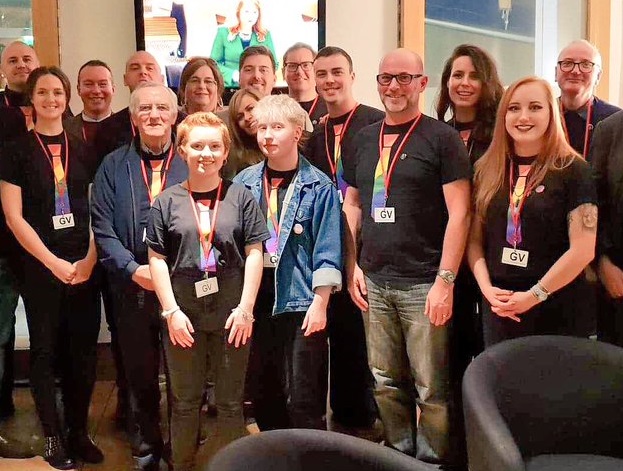 Liam Stevenson, TIE co-founder: “To date, we have reached over 25,000 school pupils – but this is only the tip of the iceberg, and we are inundated with requests as we move forward.

THE TIE Campaign has announced a Board of Trustees as it prepares to evolve to meet its new challenge of helping to deliver LGBT-inclusive education, after the Scottish Government officially adopted the recommendations of the Implementation Group earlier this month.

Tie, which has ran its successful campaign for LGBT inclusive education over the past three years on a shoe-string budget and has promoted its ideas in school assemblies and teacher training, is set to establish itself as a national charity and service provider, with plans to scale up its activites in order to meet its demands for its school-based services, ahead of national implementation of the recommendations by 2021

TIE Co-Founder, Liam Stevenson, said that the organisation would “remain true to the principles of our campaign”.

He stated: “Over the last three years, not only have we campaigned for LGBT-inclusive education, but we have been delivering services directly in schools; supporting teachers and empowering young people.

“We have seen first hand the power and impact of LGBT-inclusivity in practice, as a result our work with schools, and the positive outcomes which can be achieved for all.

“To date, we have reached over 25,000 school pupils – but this is only the tip of the iceberg, and we are inundated with requests as we move forward.

“In order to take TIE into the future and to play a role in the delivery of LGBT-inclusive education in all schools, it is now vital that we build the infrastructure which can support any organisation to grow and expand.

“As such, we are delighted to announce such a strong, experienced, and knowledgable Board of Trustees, each of whom bring with them their own individual and important skills.

“Together we will continue to remain true to the principles of our campaign, and to ensure that all young people see themselves reflected within their education.”

The new board is made up of Rhiannon Spear, SNP councillor in Glasgow City Council, Tiffany Kane, operations manager for the Common Weal think-tank, human rights lawyer Aamer Anwar, Professor Ian Rivers, Scottish Council of Deans of Education and Professor of Education for Social Change at Strathclyde University, and Kieran Daly from Big Issue Invest.

READ MORE – Analysis: The TIE campaign’s success is a template for grassroots activism

Spear, the chair of TIE, said: “The TIE Campaign has challenged us all to think about what is possible. Although The Scottish Government’s announcement to Parliament, that LGBT-inclusive education will become a reality, has been the culmination of three years work – it is truly just the beginning.”

Tiffany Kane, vice-chair of TIE, said: “The TIE Campaign has been truly transformational for Scotland. Not only has it changed how we think by challenging our preconceived notions of what it means to be human, but it has also saved lives by changing our behaviours and how we treat each other, and by giving a voice to thousands of LGBT young people across the country.

“This mission driven grassroots campaign – on a shoestring budget – has already achieved immense success. But for all involved, the campaign is just getting started.”

Aamer Anwar said: “I’m honoured to have been asked to be part of TIE. I have supported the journey which they have taken over the last few years. Put simply, TIE’s work has saved lives and has been revolutionary in it’s no compromise approach to fighting homophobia and transphobia.”

Professor Ian Rivers, of the Scottish Council of Deans of Education, said: “The TIE Campaign drew our collective attention regarding the ongoing inequalities that young people face in education.

“It has challenged me to think outside of the box, and I look forward to working with my fellow trustees to promote inclusive education in Scotland and beyond.”

Kieran Daly, of Big Issue Invest, said: “I want to see a Scotland where TIE does not need to exist. Even though attitudes and behaviours towards LGBT people have progressed since I was growing up as a gay teenager in a small Scottish town two decades ago, sadly we’re not there yet.

“In order to truly tackle homophobia, biphobia and transphobia in our schools and communities – sleeves need to be rolled up and hard work is needed on the ground.

“I’m proud to be part of this Board of Trustees, to organise TIE as a sustainable, effective, and impactful national charity – always grounded in the principled values of the campaign.”

Picture courtesy of the TIE Campaign