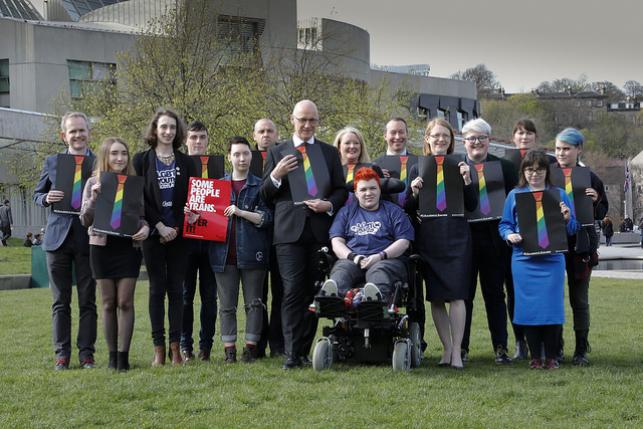 THE ICON AWARDS should be “consigned to history” in the wake of a series of controversies which have left its brand irretrievably tarnished, one of the co-founders of the Time for Inclusive Education (Tie) campaign has argued.

Following the en mass resignation of the entire Icon board, this year’s awards – billed as a celebration of the LGBT+ community and originally scheduled to take place in September – were officially canceled.

In a public statement posted on Twitter, Icon board members Thomas Anderson and Justine Smithies cited issues surrounding transparency and the “fantastic” TIE campaign as the reasons for their resignation, saying: “With many of Scotland’s LGBT+ charities and community champions disengaged from the awards, we feel the awards in their current set-up will never reach their full potential and be the authentic platform to celebrate and reward those most worthy of celebrating each year.”

First Minister Nicola Sturgeon was amongst of the finalists up for an award before the ceremony was canceled.

READ MORE: ‘We will not be held to ransom’: Tie campaign pull out of Icon Awards over demands that they pay to attend ceremony

Earlier in July, James Smith, the president of the Icon Awards, posted a public statement on social media announcing his resignation: “Having the time to reflect on the issues raised around the Icon awards, I have decided to resign my position as president.

“I am a huge supporter of the LGBT+ community and resigning upsets me as I cannot personally reward all of the worthy finalists. This will not deter me in the future and I will endeavor to continue to support the LGBT+ community with my charitable work.”

Shortly after Smith’s resignation, Third Forces News reported that the board of trustees at Big Impact, the charity associated with Icon, had decided not to go ahead with the ceremony: “It is with great sadness that we write to confirm that the Big Impact board of trustees have decided to cancel the Icon awards. We hope that the amazing work that the finalists, community groups, charities, and individuals do will be recognised in the near future.

“There is too little time to replace a credible board who would be responsible for reading submissions, doing the research and ultimately picking the award winners.

“The charity will now get in touch with all finalists and sponsors to confirm the decision and to organise full refunds to everyone who has booked and paid for tickets.”

“I think the reputation of the Icon Awards, and the fact it’s been mired in scandal almost year in, year out, for me means that the brand itself should go away – they should be consigned to history.” Tie campaign co-founder Liam Stevenson

The controversy which led to the board’s resignations was spurred by the requirement that award nominees pay to attend the ceremony, with additional costs incurred for any guests they might bring.

This was condemned by the Tie campaign, who were among the award nominees. The controversy escalated when responses from the Icon Awards to Tie’s criticisms seemed to imply that they should use the money granted them at a previous Icon Awards to pay for the expenses involved in attending this year’s ceremony.

Following the cancellation, CommonSpace asked Tie campaign co-founder Liam Stevenson if Tie welcomed this latest development: “It’s a tricky one because ultimately, there’s been young people and volunteers and people who’ve done a lot of good work, who deserve to be recognised and celebrated for doing that work.

“But when there’s ambiguity behind the motives and the intentions of the organisation who are holding the event, and when they’re charging people to go and celebrate their hard work – a lot of which will be unpaid for many people – I think that’s something that shouldn’t be celebrated, if there’s potentially profiteering that’s being done off the back of the hard work, sweat and tears of many, many volunteers.

“I think the reputation of the Icon Awards, and the fact it’s been mired in scandal almost year in, year out, for me means that the brand itself should go away – they should be consigned to history. But I think something else should come in its place, and that’s something myself and Jordan [Daly, co-founder of the Tie campaign] will be doing.

“We’re going to be having some conversations with some other organisations to see if there’s any way, any scope for getting something off the ground. It might not be in time for next year, but we want to see if we can get something off the ground that does the exact same thing, but not cost people to come along, and not make profit to be poured into any shady company.

“We are very keen to have something that recognises the hard work of the community. We think that there should be a different model, and we’re going to do our best to put something together.” Tie campaign co-founder Liam Stevenson

“We are very keen to have something that recognises the hard work of the community. We think that there should be a different model, and we’re going to do our best to put something together.”

The Icon Awards have previously been the subject of controversy during the four years of its existence, after it the revelation that Warren Paul – CEO of Paramount Creative, which stages the Icon Awards – was rebuked by an industrial tribunal for his role in a homophobic discrimination case, which resulted in Paramount Creative being ordered to make a substantial payout to the victim.

Earlier this year, Big Impact’s former chief executive Scott Barclay avoided jail after being found guilty of stealing £10,000 from the TSB bank branch where he had worked.

A recent statement from Big Impact posted on its Facebook page states: “Big Impact is young and ready to turn one year old. We are working hard to make a difference in the charity sector, and have already helped a number of charities which include Deaf Connections, Glasgow HomeStart North, Kilbryde Hospice, Italia Scotland and Bipolar Scotland.

“Our accounts will be ready to be viewed in the next 6 months and will be made available to anyone wishing to see them. We can assure you that all monies raised can be accounted for and we are in communication with OSCR the charity regulator to make sure we abide by all charitable rules.

“We lastly want to add that we are sad that the Tie Campaign have decided to return the donation of £1000 from Big Impact given last year. The Tie Campaign have achieved great things and are a fantastic organisation on a journey that we truly believe in.”