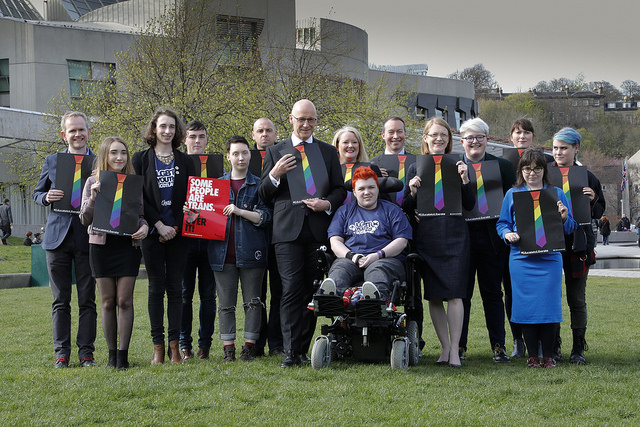 THE ICON awards on Friday (15 September) saw LGBTI activists, allies, and politicians recognised for their achievements, with two big wins for the Tie (Time for Inclusive Education) campaign.

Jordan Daly, co-founder of Tie was awarded Role Model of the Year, while the organisation scooped Charity of the Year Award for its work towards ensuring the Scottish education system is inclusive of LGBTI young people and free of homophobia, biphobia and transphobia.

The event, which is now in its third year, is intended to recognise champions of diversity and inclusion in 15 categories, representing charity, sport, media, business, entertainment, uniformed services, and politics.

Speaking of Tie’s success at the awards, co-founder Jordan Daly said: “It’s lovely to be recognised for the work that we do and we would like to thank everyone who nominated us in both of the categories that we won.

“The awards are dedicated to all of the LGBTI young people out there – who are the true icons themselves. Our work will continue until we live in a society where no young person feels isolated or excluded because of who they are.

“For over two years we have campaigned for LGBTI inclusive education in all schools and there is still progress to be made before our calls become a reality but our pledge is that we will make that happen.”

Nominations were made by over 60, 000 members of the public, and winners were selected by a judging panel of seven, including and University of Glasgow Rector, Aamer Aanwar and Diversity Manager for the Scottish FA, Hala Ousta.

READ MORE: The story of how two Yes activists changed each other and now want to change LGBTI+ education in schools

Other winners included Kezia Dugdale MSP for Politician of the Year, SNP staffer Rosa Zambonini for Straight Ally Award, and Jamie McIvor of BBC Scotland for Media Coverage of the Year, while Businessperson of the Year went to Linda Riley, owner of DIVA Magazine & OUT News Global.

MND (motor neuron disease) fundraiser and Labour activist Gordon Aikman, who died earlier this year, was awarded Icon of the Year Award for his “courage, bravery and fundraising”.

Scott Barclay, Chair of the Icon Awards said he was “incredibly proud” of the event. He said: “Each of those nominated have went above and beyond in championing inclusion in their own way and have helped Scotland become one of the most welcoming and diverse countries in the world.

“I want to thank them for their work in shaping a better future for Scotland.”