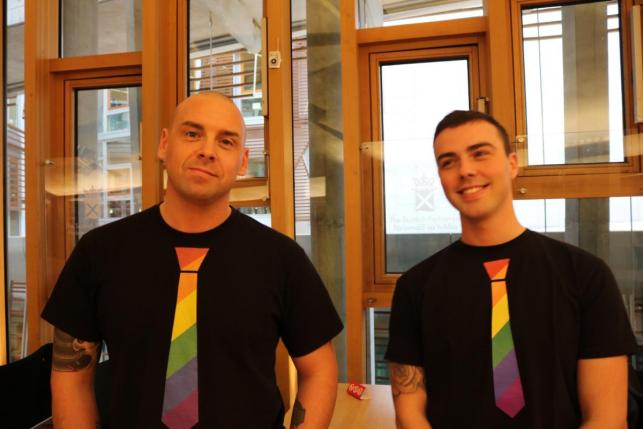 THE Time for Inclusive Education (Tie) campaign has warned that it is facing potential ‘dissolution’ due to a lack of funding to carry on its pioneering work.

Tie has been responsible for raising the issue of the isolation and bullying experienced by LGBT youth in Scotland since it was founded in 2015, and last year fianlly won the Scottish Government to its recommendation that education inclusive of LGBT identities be introduced across all Scottish state schools.

Tie was involved in the implementation group which developed the policy, and had planned to establish itself as a charity to help support teachers in deliver the education across Scotland

But a statement by the group published online on Tuesday [2 April] said that plan could be abandoned as without “core funding” further work with over 100 schools could not be carried out.

CommonSpace understands that discussions will take place this week within Tie, and a conclusion likely reached on the organisation’s future by the end of the week (Friday 5 April).

Tie was founded almost four years ago in a bid to tackle the epidemic of isolation, abuse, bullying and mental ill-health experienced by LGBT young people. Research by the campaign found that 90 per cent of LGBT school students had experienced bullying at school and 27 per cent had contemplated suicide.

In recent years the Tie campaign has rolled out a national programme of work with schools and many other organisations, teaching young people about LGBT inclusion.

The campaign has reached over 25,000 young people across the country in services provided free to schools and other organisations that work with young people. Other services the campaign provides include teacher training, training for Police Scotland officers and special school sessions teaching young people how to campaign for egalitarian causes.

The statement read: “At New Year we told you that following the announcement that our model of LGBT inclusive education was to become a reality in all state schools we would attempt to seek core funding in order to meet the massive demand that has been placed upon us for the free school services that we deliver.

Currently, over 100 local schools, a dozen local authorities, and numerous national educational organisations are looking to work with us. We cannot meet this demand – which continues to grow daily – without sustainable funding, resourcing and people power.

“Those who deliver services in schools currently juggle this around their jobs, families and commitments.

Analysis: The TIE campaign’s success is a template for grassroots activism

“Our plan is to scale these services – which are unique, proven to be effective and, we believe, more necessary now than ever before.

“Unfortunately, we have been unsuccessful in finding a core funding source thus far. We are now considering our options for the future, which may lead to the dissolution of Tie. This is not the news we hope to share with our partner organisations, or with all the school and colleges.”

In November 2018, Scottish Education Minister John Swinney made a speech in the Scottish Parliament which adopted the recommended changes to schooling from the Inclusive Education Working Group, an alliance of equality organisations supporting Tie’s approach and making their own recommendations.

The new measures for Inclusive Education included changes to personal and social education classes, new measures against homophobia in schools, more training resources for teachers and a new regime of monitoring and school inspections to register the progress of the efforts.

Read more: TIE announces Board as it prepares for role in delivery of LGBT-inclusive education

The path-breaking new approach was celebrated around the world, leading to campaigners in many countries demanding similar legislation.

In recent months the campaign had been planning to establish a permanent presence to carry out an expanding portfolio of work among young people. Following its victory in the Scottish Parliament in November 2018 it established a board of trustees to oversee the organisation’s further work.

Speaking to CommonSpace, a Scottish Government spokesperson said: “We are fully aware of the funding difficulties currently being experienced by the TIE Campaign. We are carefully considering all options to further support the TIE Campaign in its important work with schools in Scotland.”