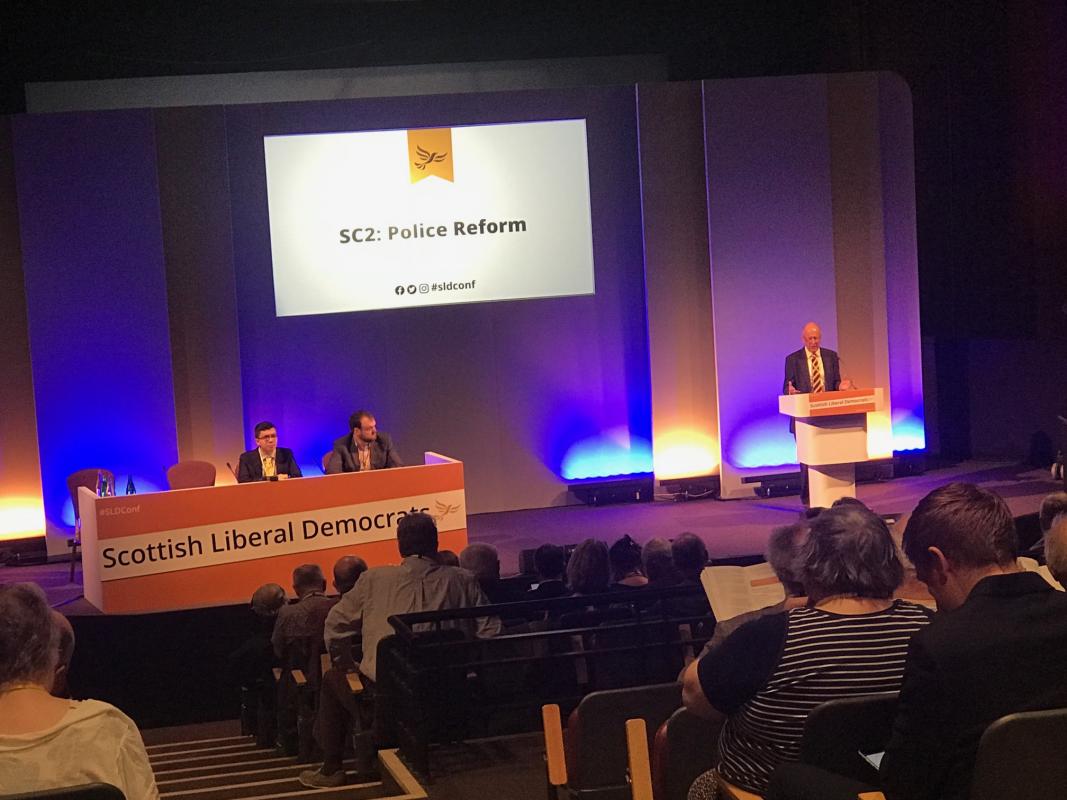 THE SCOTTISH Lib Dems are calling on the Scottish Government to think again on Police Scotland.

At the start of their spring conference in Aviemore yesterday [20 April], the Scottish Lib Dems passed a motion that calls on Holyrood to set up an independent commission that will propose legislation “to repair the damage caused” since the force was set up in 2012.

The party, which has five MSPs at Holyrood, also called for the merger of British Transport Police into Police Scotland to be halted.

Scottish Lib Dem justice spokesperson, Liam McArthur said: “The Scottish Government must now agree to an independent commission, appointed by the Scottish Parliament, not ministers, so that the damage done by the 2012 Act can be repaired through new legislation, ensuring power is shared and that effective, democratic governance arrangements exist.”

Police Scotland has been regularly rocked by controversy, with two chief constables forced to resign after they were both involved in scandals.

“[Scottish Government] Ministers failed to do the basic work to identify and plan for the risks and implications of their latest centralisation.” Liam McArthur

Sir Stephen House was forced to quit in 2015 when couple Lamara Bell and John Yuill were both found dead in a car four days after it crashed off the M9 near Stirling in 2015.

House was also criticised for putting armed officers on the beat and his force’s policies on stop and search of children.

His successor, Phil Gormley, resigned earlier this year after a spate of gross misconduct, including bullying.

Gormley was placed on special leave last September after two complaints were made against him for misconduct.

Speaking specifically about the motion passed at the conference opposing the merger of British Transport Police and Police Scotland, McArthur said: “The only ‘business case’ the SNP considered when pressing ahead with this misguided merger was a calculation of how quick they could scribble out the words “British”. This motion sends a clear message that they should go back to the drawing board.

“Ministers failed to do the basic work to identify and plan for the risks and implications of their latest centralisation.

“The officers and experts left to oversee this merger have been damning, and the timetable proposed by the SNP slipped straight away amid warnings from the very top that ministers’ plans would have compromised public safety.”

“The report [into the death of Elizabeth Bowe in 2016] found that had resources were sent to her house sooner; she would not have died.” Wendy Chamberlain

Former Lothian and Borders police officer and Scottish Lib Dem activist, Wendy Chamberlain told the conference that governance of policing was “very much straightforward” when she was working for the Association of Chief Police Officer in Scotland (ACPOS).

Chamberlain said: “I likened it to a three-legged stool. You had your Chief Constable, you had central government, and you had your local governance.

“What the SNP government centralisation agenda has done is simply to kick away a leg of the stool.

“And not only that, it is expected to stand up and take the weight of a fully grown person. That is not possible.”

“The Scottish Government must also now agree to an independent commission, appointed by the Scottish Parliament, not ministers, so that the damage done by the 2012 Act can be repaired through new legislation, ensuring power is shared and that effective, democratic governance arrangements exist.” Liam McArthur

Chamberlain added: “This loss of local accountability is felt across Scotland, particularly in north east Fife where the local area committee was refused by Police Scotland to send a representative to talk about the critical PIRC [Police Investigations & Review Commissioner] report into the death of Elizabeth Bowe in 2016.

“The report found that had resources been sent to her house sooner; she would not have died.

“Previously when there was the eight forces, you simply cannot foresee that happening.”

“Since our restructuring after the election last year – in my view – we only scrutiny on four occasions, and I think that is abysmal regarding discharging our duties under the legislation.” Cllr Margaret Kennedy

Fife councillor Margaret Kennedy told the conference that before Police Scotland came along, the relationship was always strong between the local authority and the police. However, since last years council elections, Cllr Kennedy said that they now have concerns that there is lack of local scrutiny of Police Scotland in Fife.

Cllr Kennedy said: ”Our scrutiny role for police has been discharged to what we call the protected services committee, which is not only discussing that subject matter but also has other issues around waste management, which means that the agendas are challenged.

“Since our restructuring after the election last year – in my view – crutiny [of the police] has only occured on four occasions, and I think that is an abysmal disregard for our duties under the legislation.”

The Scottish Government has pointed to a 43 year low in crime figures in defence of Police Scotland.