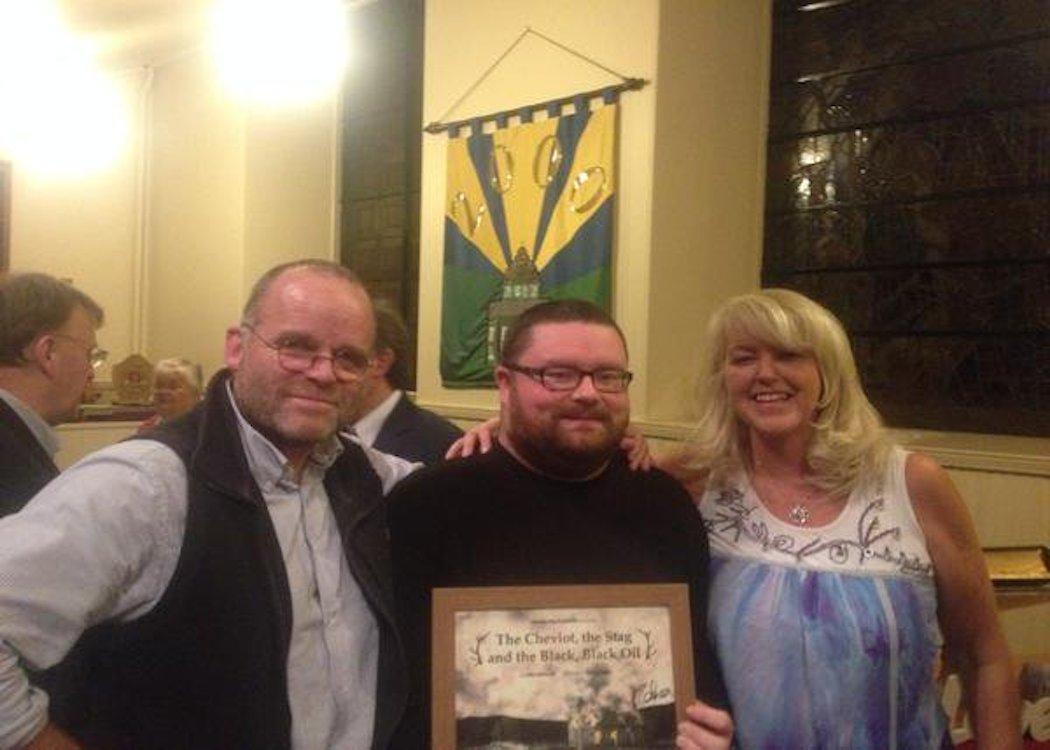 Nicky Lowden MacCrimmon, “the hero” of the SNP conference, speaks about the need for the Scottish Government to transform land ownership

THERE was only one vote at the Scottish National Party where the newly expanded party membership rebelled against the leadership: land reform .

Calls for real, radical change had been spreading across the country for months . This crystallised in a speech from a new activist, Nicky Lowden MacCrimmon, who swayed the audience in favour of rejecting ‘official’ SNP policy for more substantial proposals.

On Friday 15 January, the Scottish Government will decide whether to follow the proposals to improve the Land Reform Bill published by the Rural Affairs, Climate Change and Environment Committee of MSPs.

CommonSpace spoke to Lowden MacCrimmon about his views on land reform and the need for the government to meet the expectations of those campaigning on the issue.

Your contribution at SNP conference was celebrated as a key moment in persuading delegates to call for more substantial action on land reform.

What convinced you of the need to speak out in Aberdeen that day? And, out of interest, what sources of information had you been using to keep up to date with the land reform debate in Scotland?

I have had an interest in land reform for a long time and there a few things that had come up in recent months that had pushed me towards speaking.

My general interest comes from an interest in history, particularly the clearances. I am also a keen hillwalker and often walk through places where you can still see the ruins of houses where communities would have once made a living on the land.

I am aware that not all of these places would have been forcibly cleared but at the same time the pattern of land ownership contributed towards making these places unsustainable places to live.

This is not just 19th century ruins either, good cottages that would have been inhabited in my lifetime also lie derelict. As well as the human cost of our land distribution I am also acutely aware of the ecological impact of how land is used in Scotland whether that be the desertification and monocultures of the big sporting estates or the environmental vandalism of hilltracks being bulldozed into wild land.

While I was generally aware that the land situation was something I was intensely opposed to, until the last year I had no idea what could be done about it or that anyone else felt the same. In the last year though things really began to come together for me on this issue.

The referendum exposed me to a whole new group of people, particularly through Common Weal, that seemed to share the same views that I had. I got Andy Wightman’s books for Christmas and devouring them realising somebody else thought like me – but fortunately was informed and articulate enough to explain what could be done.

Lesley Riddoch came to speak at our SNP branch AGM in February 2015 to talk about various issues including land reform. I also went to see Dundee Reps fantastic production of The Cheviot, the Stag and the Black, Black Oil.

So having had all this exposure to these ideas and being aware a Land Reform Bill was being pulled together I was extremely disappointed to see that the Bill did not reflect just my expectations but even the recommendations of the Land Reform Review Group.

For most of my day to day info I use Twitter. I will occasionally use mainstream media but generally only if there is a link on Twitter. With regard to the broadcast media you wouldn’t even know land reform was an issue. My main sources of info on Twitter are CommonSpace, Andy Wightman, Lesley Riddoch, Bella Caledonia and even Rev Campbell (Wings Over Scotland) sometimes, when he takes time out from being an arse to put up interesting articles.

With regard to why I spoke at Aberdeen I was wrestling with whether I should or not. I was probably leaning towards not speaking for no other reason than I had never made a public speech before and the thought of speaking in front of 1,200 people had me feeling physically sick.

However sitting in my hotel room I saw Alex Thomson’s report on C4 and just thought ‘If not me then who and if not now then when’. I knew I had to get up and say something.

The result of the vote was a clear message from the SNP membership to strengthen the Bill.

Are you hopeful that the wider party leadership will act on the proposals of campaigners and members?

Well, before the motion was even remitted back we had Aileen MacLeod and Mike Russell MSPs promising to listen and strengthen the Bill so with the remit back being successful I would certainly hope so.

I honestly believe that the SNP leadership and indeed MSPs from other parties would love nothing more than to be bold on this issue but perhaps are nervous of the legal challenges from the establishment interests. I am optimistic that we have given them a push to be more bold on the issue of land reform. It won’t be the end of the land reform movement but it will be a beginning.

What are the key issues you have with the current draft Bill?

Well, if I had a wish list I could name 20 different ways in which we could radically transform land ownership in Scotland that go far beyond what the current bill proposes.

However, back in the real world my specific objections to what was recommended by the Land Reform Review Group that did not appear in the bill were the lack of a requirement for landowners or holding companies to originate in the EU which would provide much needed transparency. Also, the lack of a limit on the amount of land any individual or company can own.

One major obstacle identified by CommonSpace to more substantial reform is the threat of legal action by rich landowners . What is your view of such threats and how do you think the Scottish Government should respond?

Like their admirable stance on minimum alcohol pricing the Scottish Government should be prepared to back their own legislation in the courts or be prepared to stand behind individuals who rely on that legislation. Article 1 ECHR is not an absolute right and there are any number of public interest exemptions which trump that right.

Indeed, I back the idea of a dedicated rapid response legal team for the Scottish Government to defend any legislation they bring forward.

Several campaign groups – such as the Scottish Land Action Network and the Birnam Land Conference – called on the large rural estates to be broken up to allow economic development and a more equal ownership of land in Scotland. Is this part of what is required for a progressive land reform policy?

I instinctively believe this to be the case. The end of primogeniture is to be welcomed but seems to me to be a very slow process of change.

Some urban political groups often struggle to relate to the land reform debate. How important do you think land reform is for urban issues such as derelict land and housing costs?

It is hugely important for the quality of housing and health for the people of Scotland that we have a policy on urban land that works for communities. There is a direct link between the areas of highest deprivation and proximity to derelict land. I believe that sharing this message is the single most important issue facing the land reform movement.

This needs to become a genuinely populist movement and can not do so when it seems like a specialist interest issue confined to the Highlands.

The case of Andrew Stoddart and other tenant farmers facing eviction has been a case which has caused outrage, with 19,000 people demanding government intervention to stop the eviction of the tenant farming families on the Colstoun estate. What is your view on this case?

Taking the obvious dubious morality of the landowners actions to one side, I think it is a disgrace that individuals who relied on legislation, as it stood, to take a course of action that they believed was correct are then left high and dry when that legislation fails. The Scottish Government has a moral duty and a duty under the principles of natural law to support these people.

Land reform expert Andy Wightman believes that modernising Scottish land ownership is a generation long project. Will the current Land Reform Bill represent a breakthrough moment for campaigners or is it merely a small step forward as part of a longer journey?

As I said before, it will be the beginning of the process. We are trying to turn the tide of 300 years of culture, practice and establishment interest. We not only need to make the legislative changes but make the cultural changes in people’s thinking where the vast majority of people say: “Hang on, this isn’t right, this isn’t normal and we are going to change it.”