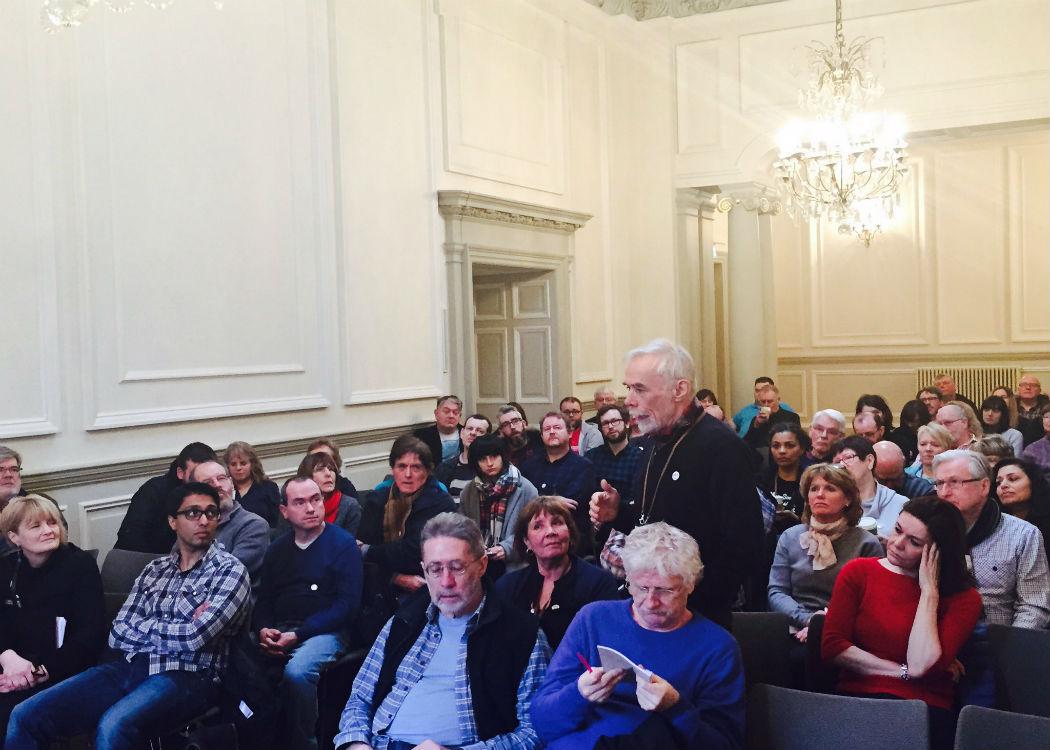 With the Scottish left unsure of itself over the EU referendum, CommonSpace talks to two Scottish historians who led opposite sides of the debate at the #ric2016 conference

“WE USED to talk about a united socialist states of Europe,” Allan Armstrong tells CommonSpace.

The existence of a capitalist states of Europe, the 28 member EU, somewhat complicates that slogan, but Armstrong, a historian of the relationship between the socialist movement and the UK’s various national questions , still think it has some value.

“We need to start from the 500 million people in the EU as the continent wide force for change,” he says.

Neil Davidson, an award winning academic and historian and the author of ‘The origins of Scottish nationhood’ – a major textbook on the Scottish nationalism – couldn’t disagree more.

“This talk about a ‘united socialist states of Europe’ – it’s phantasmagorical. You can want that all you like, what we have is the EU.”

“We know that the EU is a bosses club. But the UK is the original bosses club.” Allan Armstrong

Davidson and Armstrong debated at a side meeting of around 80 leftists at the 2016 Radical Independence conference . Asked to vote by CommonSpace, the meeting was split three ways, with almost equal number voting Out, In and undecided.

The radical left has struggled to find a common position for many years on the EU. Supporters of the project point to institutional protections for worker’s rights, the free movement of people within the EU and environmental protections. Detractors point to the imposition of austerity measures on countries including Greece and EU strictures compelling economic liberalisation of national economies.

“Two main arguments have emerged on the left about the EU. One which says that the EU is, or can be, a progressive institution. Another argument says that the EU is neo-liberal and reactionary, but it’s a lesser evil than UKIP and the right,” Davidson argues.

The first argument, Davidson says, relies upon a mythic image of the EU as an institution that has prevented a return to European warfare and has social democratic impulses. The EU hasn’t prevented wars, rather “Western Europe was militarily united against the Eastern bloc,” he says.

“The EU only had a social democratic character for as long as that chimed with the dominant form of European capitalism. Since the transformation of European states towards neo-liberalism the EU has adopted that form of capitalism,” he says.

“As for the second position, backing the lesser of two evils is rarely wise,” he adds.

European countries have, since the 1970s, adopted measures of economic liberalisation which have seen growing inequality and a diminishment of state welfare. Linking this to the EU evades the fact that it has the same character as it member states, Armstrong says: “We know that the EU is a bosses club. But the UK is the original bosses club.”

“What happens the day after an Out vote?” Armstrong asks.

“If people like George Galloway had been right during the Scottish Independence campaign, and maintaining the UK was some sort of victory for the left, we would have seen trade unions out marching on the street in celebration after a No vote.

“What did we see? A loyalist riot. It would be the same across the UK for an Out vote, it would be a carnival of reaction,” he says.

“The left is a bit too fixated on the far right,” Davidson says, “it’s a form of displacement -we can’t beat neo-liberalism, but we can beat these bigots, so we’ll fight them instead.”

“The main enemy is the capitalist class, and they are overwhelmingly in favour of remaining in the EU,” he adds.

It’s not just Ric that is undecided. The Rise socialist alliance contesting the 2016 Scottish elections in the regional list seats has not arrived at a position on the EU, and its status as a coalition rather than a party may mean it is unlikely to. The SSP, the largest constituent part of Rise, has voted to support an In position . The Green party, including its left wing, is also staunchly for remaining within the EU and voted to launch its own campaign to reform the EU from within.

“The main enemy is the capitalist class, and they are overwhelmingly in favour of remaining in the EU,” Neil Davidson

In being divided, the radical left is not alone as a political force. The Conservative party are of course factionally divided on the issue, with the party’s leading figures heading-up opposing campaigns.

Labour grandee and former shadow chancellor Alan Johnson has claimed that 92 per cent of the parliamentary Labour party will back an In vote, but the leftist leadership group around Jeremy Corbyn is clearly ambiguous about the benefits of the EU, and this has left them rudderless in the debate, leaving the right of the party to conduct the ‘Labour In’ campaign.

Davidson and Armstrong both agree that the left has not carved out a space for itself in the debate.

“So far this has been a debate between the right and the far right,” Armstrong says.

“The left must be bold enough to stand by our own politics in this debate. We did before in the 1975 referendum,” Neil says.

With the calling of the referendum for June 23 rd , on the day of the Ric conference (20 February), the left has scarce little time to find its bearings.