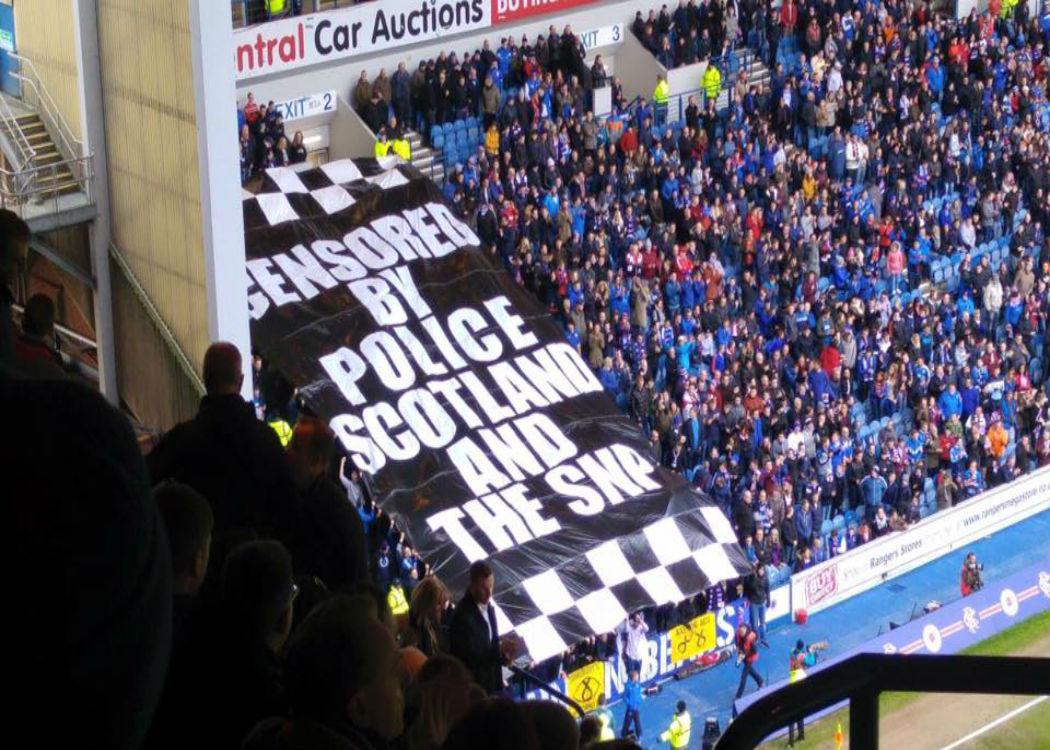 01/03/2016
david
Academics, politicians and figures from the world of football sign letter against the Offensive Behaviour Act
HISTORIAN PROFESSOR TOM DEVINE, Greens leader Patrick Harvie and football commentator Tam Cowan have signed their names to an open letter condemning the ‘Offensive behaviour’ laws and calling for them to be repealed.
The letter, which carries the names of many academic, political and civil society figures calls for the Offensive Behaviour at Football and Threatening Communications (Scotland) Act 2012 – commonly referred to as the Offensive Behaviour Act (OBA).
The Scottish Government intended for the act to combat sectarianism at football matches. But campaigners argue that the laws are anti-democratic, unworkable, and target young working class football fans.

“This Act is therefore an unjustifiable attack on freedom of speech and the rights’ of fans to political expression.” Letter calling for the repeal of the OBA

The letter, signed by over 50 public figures and organisations reads: “We do so on the basis that it is wrong to create a law which applies to one demonised sector of society, which this act does to football fans. It is by definition a discriminatory piece of legislation and we also note that the government has failed in its commitment outlined in its Equality Impact Assessment to carry out an equalities audit in regard to this law.
“We also oppose this legislation on the basis that it is practically impossible and inherently dangerous to criminalise offensiveness. This Act is therefore an unjustifiable attack on freedom of speech and the rights’ of fans to political expression.
“This legislation was a clumsy political response to one football match which serves only to unjustly criminalise football supporters and should be repealed as a matter of urgency.”
Political figures to sign the letter include left wing Labour MSP Neil Findlay, Scottish Green Party co-convener Patrick Harvie, Rise candidate for Glasgow in the 2016 Scottish elections Cat Boyd and candidate for London Mayor George Galloway.
The OBA has led to escalating tensions between police and football fans in recent years. In March 2013 hundreds of Celtic fans were kettled , and 13 arrested, by around 200 hundred officers in Glasgow’s Gallowgate.
In November 2015 CommonSpace reported an incident where a Police Scotland officer allegedly verbally abuse one young fan on Glasgow’s High Street, telling him ” I will fucking ruin your life “.
The letter is made public on the same day (1 March) as the Scottish Parliament’s public petitions committee hears evidence from the Scottish Government in response to campaigning group Fans Against Criminalisation’s petition calling for the repeal of the OBA .
The full list of endorsements is as follows:

Carlton Brick, Lecturer, University of the West of Scotland

CommonSpace journalism is completely free from the influence of advertisers and is only possible with your continued support. Please contribute a monthly amount towards our costs. Build the Scotland you want to live in – support our new media. Picture courtesy of Facebook
Common Space
Archive
Share Article: