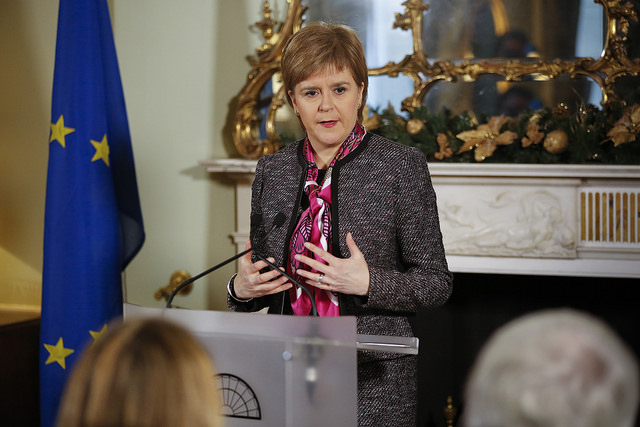 Tommy Sheppard, MP for Edinburgh East and SNP Spokesperson on the House of Lords, Scotland and Cabinet Office, explores why Scotland voted overwhelmingly against Brexit, as part of the Compass´thinktank´s report ‘The causes and cures of Brexit’

I’VE been asked to give a Scottish perspective on why people here voted for Brexit. Or, more to point, why they didn’t.

Scotland’s votes in the 2016 referendum were counted by local authority area – of which there are 32. The result was 32:0 as every single part of the country voted to remain in the EU. Admittedly in some areas, especially in the north-east, the majorities were wafer thin, but overall Scots voted by 62 per cent to keep their European passports.

So why such a big difference compared with south of the border?

The alienation of the governed from those who govern them has been a trend in recent decades in most liberal democracies. Those with little to lose and little to hope for have come to resent the political elite. Frustration, anger and disillusion have taken hold in communities living on the edge where deindustrialisation and globalisation have hollowed out hope. Scotland is not immune to these developments.

There is a huge difference though. In most countries these sentiments have fuelled the growth in populist parties of the right. In Scotland the Scottish National Party (SNP), an avowedly left-of-centre party, has been the beneficiary. It has provided an alternative for those disillusioned with the principal UK parties and has advocated a contemporary nationalism rooted in civil society and with a narrative about taking political control of the country in which we live.

This has taken up much of the political displacement of the last 25 years north of the border, leaving parties like UKIP little room to operate. And because this has happened slowly and persistently the change is permanent and sustainable. The SNP has provided both an alternative in government (now in its 12th year of office in the devolved Scottish parliament) and a focus for opposition to the political establishment in the UK.

UKIP has found it impossible to grow in this context. Even in the 2014 European elections where Farage topped the polls in England with 27.5 per cent and 24 MEPs, UKIP struggled in Scotland. On the final transfer the party succeeded in narrowly taking the sixth of Scotland’s six MEPs.

A consequence of this was that when the Brexit referendum came the only elected parliamentarian to campaign for it here was UKIP’s David Coburn, who in his two years of office had become such a self-caricature that no one took him seriously. The fact that every one of the five parties represented in the Scottish parliament campaigned for Remain created a different atmosphere in which to ask the question.

READ MORE: Analysis: New figures show the Union is falling apart in front of our eyes

In many ways Scotland had benefited directly from the UK’s membership of the EU. Structural funds channelled into the Highlands and Islands allowed the development of roads, bridges and other major infrastructure. And the road signs with little blue stars crediting funding of these projects were not lost on the population.

There was also a feeling among many people that being in the EU allowed Scotland to have an identity it was being denied in Britain. Certainly, for many who aspire for Scottish independence there was a feeling that in some way Europeanness could replace Britishness.

Of course, not everyone saw it that way. Opinion was divided. Such studies as there were suggested that the split in voting was reflected across the parties, so a third of SNP supporters probably voted for Brexit.

There will have been some for whom Scottish independence means keeping ourselves to ourselves. But not many. A more convincing argument was that being in the EU would subvert the ability of an independent Scotland to make social and economic change on a significant scale. This was not a dissimilar case from the one made by some on the Labour left who claimed that the EU would prevent the implementation of their manifesto.

READ MORE: Why the EU has become the dividing line of Tory politics – even if it costs them the union

These pro-Brexit voices focused on the familiar argument about sovereignty asking why, once having put power into the hands of the people, they should then allow its transfer to Brussels. Jim Sillars, former SNP deputy leader and ironically one of the architects of the party’s flagship policy of independence in Europe, fought for Brexit on exactly these grounds.

In the areas of Scotland where Brexit had the most support, the coastal communities of the north-east, fishing and agriculture were important factors. Onshore fish processing and fruit harvesting would not survive without EU migrant labour. Yet this didn’t stop the wealthy boat owners and big farmers campaigning for Brexit. The Common Fisheries Policy was presented as a stranglehold around the throats of the Scottish fleet. It became the scapegoat for the decline of an industry. It had been presented as the bogeyman for so long and with such passion that it became almost impossible to argue against in some areas. No one asked whether UK ministers had argued the case for the Scottish fleet in Brussels, or whether it could be reformed.

People voted for Brexit in Scotland for many of the same reasons they did in the rest of the UK, just not in such numbers. Undoubtedly racism and xenophobia infest many Scottish communities and many were motivated to vote for Brexit on these grounds. The difference is that the Scottish political class had closed ranks on this question years before and while these attitudes might have existed they were never given the legitimacy they were in England, where fear of immigration became the principal driver in many ‘left-behind’ provincial towns.

HELP US BUILD A COMMON FUTURE TOGETHER: Support our work at allofusfirst.org/donate/