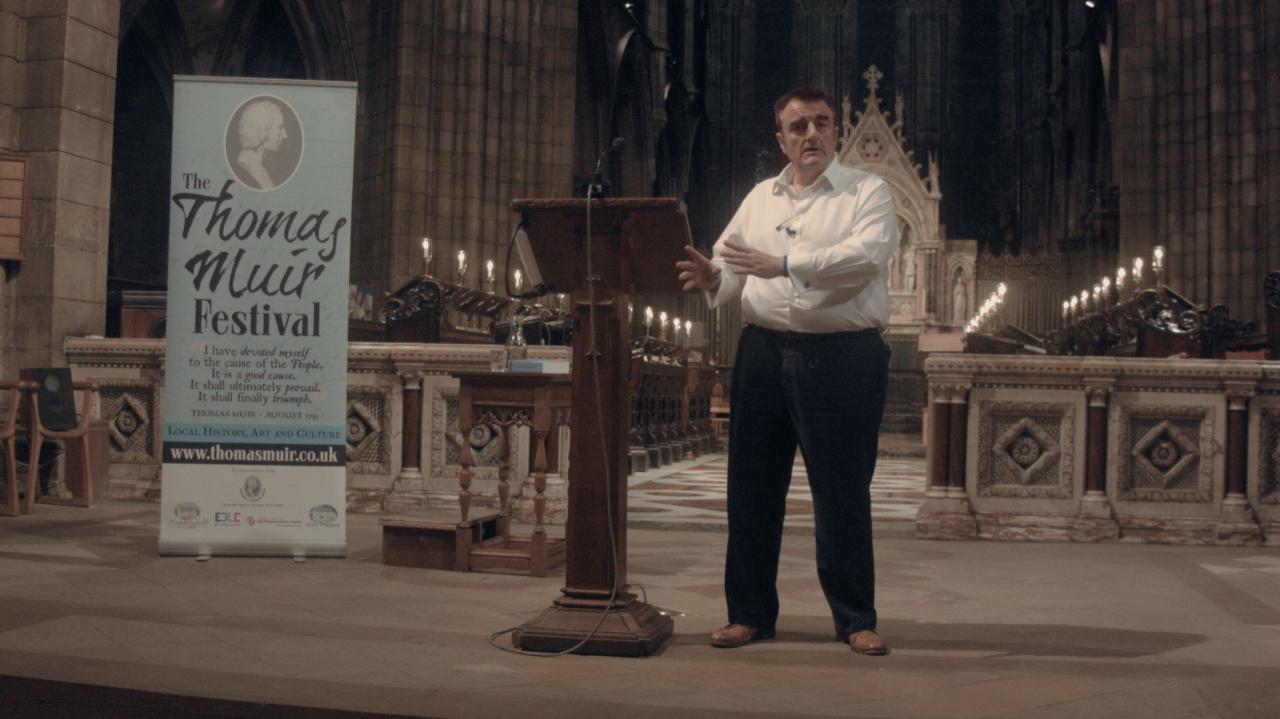 Delivering the annual Thomas Muir lecture, the SNP MP for Edinburgh East argued in favour of securing a fresh mandate for a second referendum in the next Scottish parliamentary election

TOMMY SHEPPARD, the SNP MP for Edinburgh East, has advocated using the next Scottish parliamentary election to secure a fresh mandate for a second independence referendum, arguing against the idea of holding another vote prior to the completion of Brexit.

Delivering the annual Thomas Muir lecture at St Mary’s Cathedral in Edinburgh, the left-wing MP and founder of the Stand Comedy Club, tied together his admiration for Muir, the 18th century Scottish reformer and “father of Scottish democracy”, with his belief that the fight for Scottish self-government falls within a historical tradition of political radicalism and reform.

Following introductory remarks from Muir scholar Murray Armstrong, Sheppard spoke for over an hour, addressing subjects such as the SNP’s performance in the last General Wlection, the rise of Jeremy Corbyn, and the circumstances under which another referendum could be held.

“If we can’t win a majority in 2021, out of a range of pro-independence parties, under a system of proportional representation, then we will not win a year before anyway.” Tommy Sheppard, SNP MP

Giving what he stressed was a personal opinion, Sheppard went on to argue that any new independence referendum was unlikely to be held before Brexit, given the many uncertainties involved and the need for an adequate campaign period.

“I know there will be people who will be concerned about that, who will say, ‘Well, we could lose on this, we might not win.’ Well, we might lose. I say, have courage in your conviction – because the truth is, if we can’t win a majority in 2021, out of a range of pro-independence parties, under a system of proportional representation, then we will not win a year before anyway.”

Sheppard said: “Either we can try and activate another referendum on Scottish independence the heavily nuanced proposition of the outcome of Brexit, and say the options have changed compared to 2014 and we want to vote again, or we go forward to the 2021 election and try to win a fresh mandate, which is unconditional, and simply say: ‘This is a new vote for a new proposition, because the world has changed.’”

He did, however, note that his argument came with a caveat: “This is what it looks like now – it might be different next week,” he said to laughter from the audience, observing the political turbulence of the last two years made long-term predictions extremely difficult.

On the subject of the Labour party, Sheppard contended that the SNP’s last manifesto was a more left-wing document than that of Labour.

On the subject of the Labour party, Sheppard contended that the SNP’s last manifesto was a more left-wing document than that of Labour. While he acknowledged that many Yes voters had been “seduced” by Jeremy Corbyn’s leadership, Sheppard also argued that, given the fractious nature of the Labour Party, any Scottish left-wing votes for Labour in future could result in replacing left-wing SNP MPs sympathetic to many of Corbyn’s policies with right-wing Labour MPs who have previously sought to depose or undermine him.

However, Sheppard added that the SNP should work with Labour wherever possible of areas of mutual agreement.

Sheppard, a noted republican, also went on to argue that, whenever the next succession to the British throne takes place, the institution of the monarchy should be re-examined.