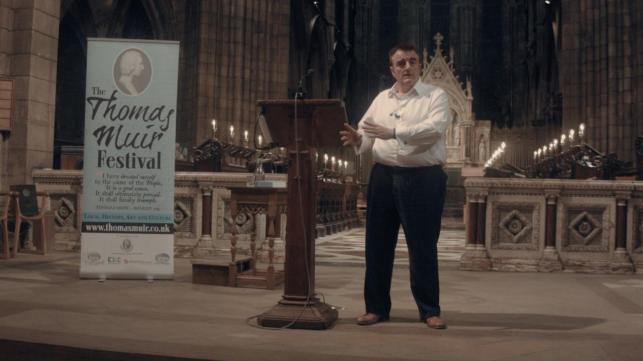 TOMMY SHEPPARD, the left-wing SNP MP for Edinburgh East, has been widely speculated upon as a potential candidate for the party’s deputy leadership following the unexpected resignation of ex-MP Angus Robertson over the weekend.

Sheppard, a former assistant general secretary of Scottish Labour under John Smith who ended his membership of the party in 2001, joined the SNP following the 2014 independence referendum campaign, during which he was the Edinburgh South organiser for Yes Scotland.

Elected as an SNP MP in 2015, he unsuccessfully ran for the SNP deputy leadership in 2016, and considered running for the SNP’s Westminster leadership in the aftermath of Angus Robertson losing his seat in 2017.

So far, the only definitive statements of the upcoming contest have been from MSP James Dornan, who has announced that he will run for deputy leader, and from MEP Alyn Smith, who has said he will not be standing.

Although he has not declared his candidacy, while speaking to CommonSpace Sheppard confirmed earlier reports that he was “thinking about it”, before discussing the challenges ahead for anyone who assumed the position and the state of the SNP and Scottish politics in 2018.

READ MORE: Tommy Sheppard: second referendum should only be held after next Scottish election

Given that Sheppard has neither put his name forward or ruled himself out, when asked what might inform his eventual decision over the coming days and weeks, Sheppard answered: “What is the nature of the job? Does my skillset match whatever that might be? I’d have to review and adjust some of the things I was saying two years ago when I was runner-up, because we have moved on a bit.

“For anyone who thinks about it [the position of depute leader], one of the things to consider is the prospect of actually winning. I don’t need to do this to establish my profile or something. I’ve had enough glorious defeats, and I fought the good fight two years ago.

“And the third thing would be to do with personal and family stuff, and other commitments I have in my life. It’s a big ask, and I need to weigh up if I’m in a position to do it.”

While making his decision, Sheppard said that he would be “talking to a number of friends and colleagues.”

“I’m in no great hurry,” Sheppard continued. “We haven’t even opened nominations yet. It’ll probably be next month. I think there’s plenty of time to reflect and think this through and talk it through with others.”

“It needs to be somebody who has the ear of the grassroots and is able to bring that to the top table. To be that conduit for what people are thinking and aspiring to on the ground.” SNP MP Tommy Sheppard

Another potential candidate for the deputy leadership is fellow Edinburgh SNP MP Joanna Cherry, who ran for the SNP’s Westminster leadership in 2017, and is also widely perceived as belonging to the party’s left. Following Robertson’s resignation, a spokesperson for Cherry told CommonSpace that she is “currently considering her position”.

Given that Sheppard supported Cherry after deciding against standing as Westminster leader in 2017 due to lack of support, Sheppard emphasises that this is a different situation.

“I supported Joanna,” said Sheppard of the 2017 contest. “That was a different thing, because that’s a very closed electorate – there are 35 votes available. There’s not much guesswork required, you can just ask people if they’re going to support you. There was no polling or anything required in that one, so it was pretty clear to me that I wasn’t likely to get past the first ballot. So, I couldn’t be arsed.”

Asked what the main tasks ahead would be for the new SNP depute leader, regardless of who it is, Sheppard responded: “[Last time], I wrote an article for the National which talked about how the leader and deputy leader positions ought to compliment each other, with the leader obviously being front-facing to the general public, to the country, and playing the role as head of government, whereas the deputy [would be] being the person who, if you like, watches the leader’s back within the party, and has a relationship internally.

READ MORE: Tommy Sheppard: SNP must respond to wake up call of Corbyn effect after #GE17

“I think I would expand that slightly to say, internally not just within the party but within the Yes movement. It needs to be somebody who has the ear of the grassroots and is able to bring that to the top table. To be that conduit for what people are thinking and aspiring to on the ground is probably the most important role.”

Asked what he thinks of the current relationship between the SNP and the wider pro-independence movement, Sheppard says: “I think it’s pretty good. I spend a lot of time talking to Yes groups up and down the country, and I haven’t been to one yet which isn’t pretty much led by SNP activists on the ground. I think the SNP grassroots are organic – they’re really made of bricks, in terms of the Yes movements in their localities.

“That’s not to say that the SNP grassroots themselves don’t maybe aspire to more of a say in the party generally, but I think it would be wrong to talk about any disconnect between the SNP and the Yes movement.

“There’s obviously a degree of impatience in quarters, at a local level, and people feeling a bit rudderless, or uncertain about what happens. I don’t think there’s much you can do about that in the short-term, because we are in a period of the greatest political uncertainty I’ve ever known. So, until some things shake down later this year, it’s very, very difficult for anyone to get traction in anything. I think we need a lot of applied patience at the minute.”

Given that former first minister and SNP leader Alex Salmond emphasised that the political uncertainty of the present era has heightened the fragility of the British state, CommonSpace asked Sheppard if he agrees.

“God, yes. Anything could happen in all sorts of directions. Theresa May might not be prime minister tomorrow.”

“Anything could happen in all sorts of directions. Theresa May might not be prime minister tomorrow.” SNP MP Tommy Sheppard

Earlier this week, the National newspaper cited unnamed “senior SNP sources” as saying that the key focus in the contest to succeed Angus Robertson would be winning the case for Scottish independence. Asked if he agreed, Sheppard answered: “Yeah, but that sort of is the job. I can’t imagine anybody becoming deputy leader of the SNP who isn’t going to want to be part of a new case for independence.”

Given the wide array of ideological variants within the SNP, and the extent to which that variety is reflected in the mooted candidates for depute leader, CommonSpace asked Sheppard whether he could foresee any potential difficulties or ruptures between any of them and First Minister Nicola Sturgeon.

Sheppard replied: “I think, compared to other parties, we’re actually quite blessed in that we have a good range of serious contenders, all of whom have got different CVs and pedigrees and things to offer. But the choices people make will be much more nuanced.

“This isn’t a debate between left or right, or fundamentalist or gradualist – it isn’t. I think this will be about trying to identify the best person to do the job in the current period. I hope there will be a thorough and robust contest, and a good exchange of views, but I think it will have the effect of bringing the party together, rather than – as other parties do – splitting apart.”

In his Thomas Muir lecture last year, Sheppard argued that the perception of Labour under Corbyn being more radical than the SNP was mistaken, and that there were numerous policy areas where the SNP’s radicalism outstripped that of Corbynism.

Asked if he saw any change in that since Richard Leonard became Scottish Labour leader, Sheppard said: “No, I don’t at all. In fact, I see increased opportunism. His [Leonard’s] main argument appears to be to criticise the SNP government for not using powers that a) they don’t have, and b) his party voted against us getting.

“So whilst that rank opportunism continues, I think it needs to be exposed, and in exposing it, we will clearly demonstrate that Corbyn’s Labour party or Leonard’s Labour party isn’t half as radical as it thinks it is.”

And, given that recent polling seems to suggest that the Scottish Tories may be falling back into third place in Scottish politics, Sheppard continued: “I think we’ve had ‘peak Ruth’ now. I don’t think we are vulnerable. I think we’ll have a fight on our hands at the next election, but we’ll be fighting the Tories to win seats back. I’m not in fear of losing any more of them. Our main fight will be against Labour.”

Asked what he feels the SNP’s main tasks are for the year ahead other than remaking the case for independence, Sheppard responded: “Come back to me if and when my name’s in the ring.”