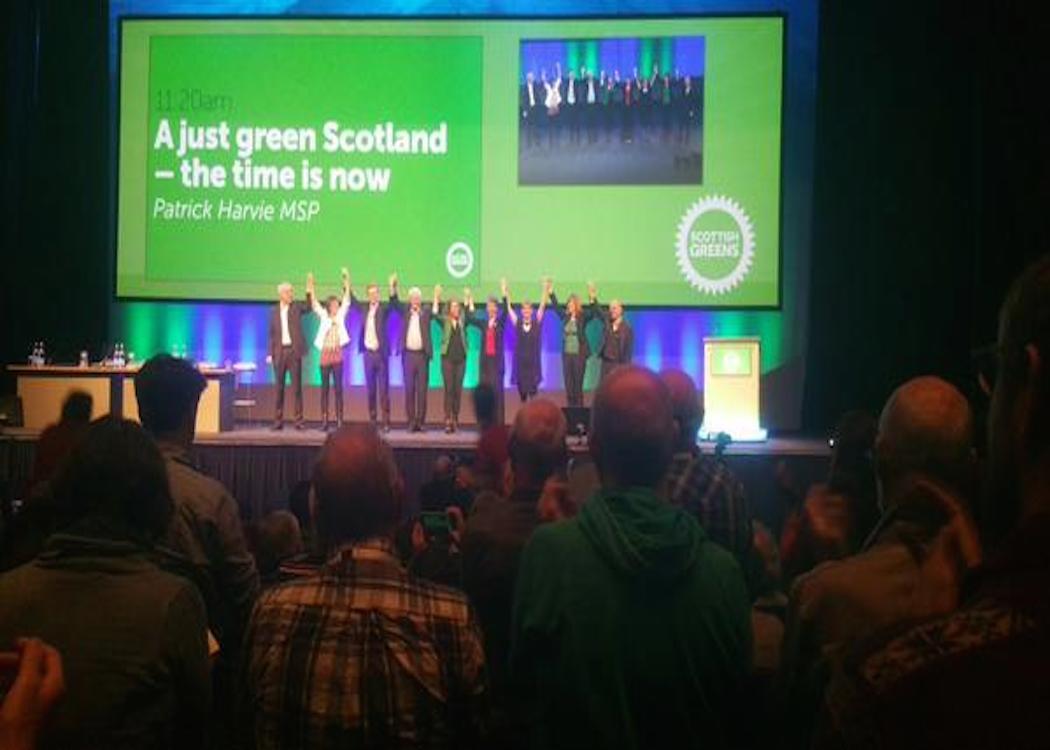 THE CANDIDATES aiming to create a ‘rainbow parliament’ in Edinburgh have announced their campaigning priorities for next May’s Scottish parliament elections.

The Scottish Green Party, holding its conference in Glasgow, aims to increase its representation from two MSPs with success on the Scottish election list vote.

Leading Scottish Green Party candidates, who are all pro-Scottish independence, have all been given ‘portfolios’ to focus on specific areas of policy in the seven months before the election.

Beattie-Smith is a well known campaigner and community activist, who has also worked with Citizens Advice Scotland.

She spoke of her experience travelling across the region – “slowly by public transport” – meeting communities who spend “half their income on fuel or half their time on public transport”, people “who adore their landscape and the community they grew up in, but often lacking opportunities to build a stable life”.

She added that investment – in areas like child care and infrastructure – is “about more than just money. It’s a statement of values about what matters to us”.

Chapman is co-convenor of the Scottish Green Party who represented the party as part of the Smith Commission. She is also rector of the University of Aberdeen.

Chapman paid particular attention to the challenges to the north-east from the oil price and housing crisis.

The fall in oil prices required a jobs response and “a just transition away from fossil fuels”.

The Tory “long-term economic plan is all about pushing up the housing bubble”, Chapman added, a plan that is pushing up rental prices across the country.

“The rent is too damn high,” Chapman said, as she called for a living rent and rent controls to control expensive housing costs.

Finnie – a former SNP MSP who left the party over Nato membership – is the lead candidate in the Highlands and Islands for the Greens.

A former police officer, he will lead justice policy for the Greens.

He said his record on pushing for a “a rights-based approach” to policing meant more authoritarian policies on armed policing and stop and search have been moderated.

The Greens, Finnie said, are an “alternative voice” on drugs policy – placing “education and rehabilitation” ahead of imprisonment.

Greer was a leading figure in the pro-independence campaign and has long supported greater youth participation in politics. He will represent the Scottish Greens on Europe ahead of the referendum on UK membership.

Greer argued for an independent approach from the party to ensure it was “not a debate between the big business, neo-liberal European model & a neo-liberal, big business isolationist model”.

The Greens would “not be cheering David Cameron’s negotiations scrapping workers rights and environmental protection” but would champion a union based on democracy and social justice.

The Greens would stand for a Europe that “builds homes for refugees rather than fences to keep them out”.

Robb works in sustainable development and previously was employed by South Lanarkshire College.

Focusing on youth and women’s employment, Robb said she would oppose those “using austerity for a race to the bottom” in favour of a PS10 an hour Living Wage and strong trade union rights.

In her view there remains a need for greater “high quality training and childcare” to untap the potential of many people across Scotland.

“Housing, transport, food, care and energy will create jobs now and long into the future,” she said.

Ruskell previously served as a Green MSP from 2003 and remains a councillor in Stirling.

Setting out Green priorities on the environment, he said that the party would “put planet first and political expediency second”, adding that the party had built up a credibility and trust on environmental policies over the full life of the Scottish Parliament.

He warned that the right to public water was “under siege from climate and corporations” across the world, with notorious polluter Anglian Water this week getting its “dirty feet in our public water supply” with a PS350m contract.

He claimed the Greens “understand how global corporate power can also ravage our environment” and that “you only get the environment people want by voting Green”.

Johnstone was elected as a MSP in 2011 and has campaigned on a range of issues including transport, sport and health policy.

Johnstone set out her party’s approach to health policy – which she said goes beyond providing health services at the point of cure.

Instead she argued that a wider approach had to focus on prevention and supporting health-driven economic and social policies.

Clear air, mental health support, a Living Wage and keeping Scotland free of fracking were all examples of policies to improve the health and well-being of the nation, according to Johnstone.

Harvie, co-convenor of the Scottish Greens, has become the party’s highest profile politicians following his spell as a leader of the pro-independence campaign Yes Scotland.

In a wide ranging speech , Harvie set out the successes of the party in parliament and said a larger group of MSPs would be a constructive and effective force in driving more progressive policies after 2016.

The Scottish Green Party, if it performs especially well next May, hopes that candidates ranked second on the regional list voting system – like Zara Kitson in Glasgow or Andy Wightman in Lothian – may also have a chance of being elected as MSPs.