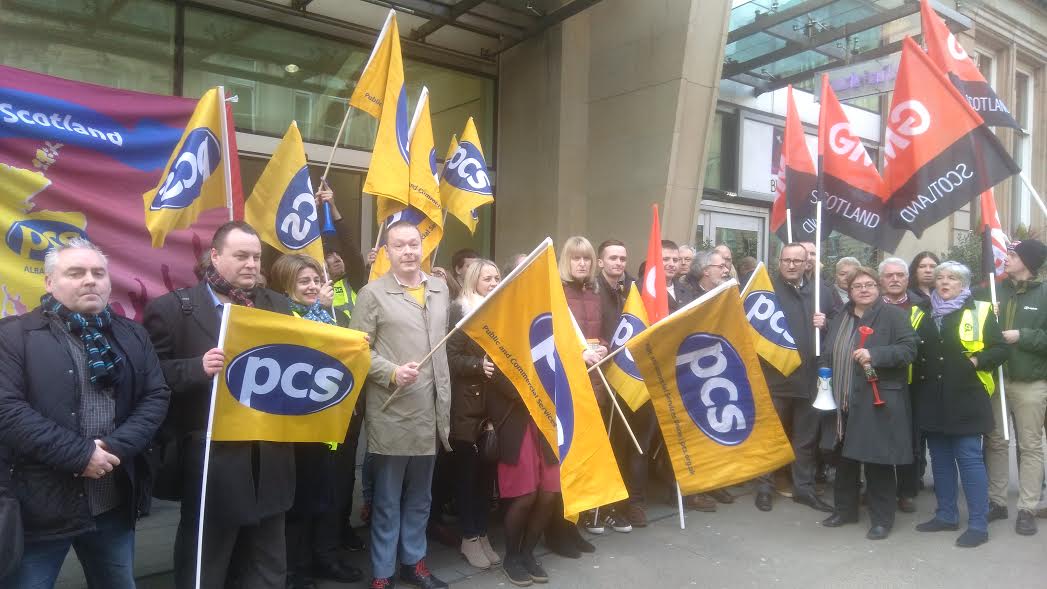 The union’s 2018 pay claim calls for a 5 per cent pay rise, a Living Wage of £10 an hour and pay equality across the civil service

THE PUBLIC AND COMMERCIAL SERVICES UNION (PCS) has called for urgent talks with the Cabinet Office to discuss its 2018 pay claim and the rectification of “unjustifiable” pay restraints.

PCS, which largely represents workers within the civil service and other public bodies, has long maintained an opposition to the UK Government’s controversial one per cent pay cap on public sector pay, and in a consultative ballot held last year, its members voted overwhelmingly in favour of both the union’s campaign against the pay cap and the possibility of industrial action if it was not lifted.

PCS General Secretary Mark Serwotka, writing to Minister for the Cabinet Office David Lidington earlier this month, argued that since the financial crisis of 2008, PCS workers in the public sector have suffered in consequence of policies “designed to make them pay for a crisis not of their making”.

PCS’s 2018 pay claim now calls for a pay increase above the rate of inflation to “partly” compensate PCS members for the cut in their living standards which these policies have resulted in. This increase would amount to either five per cent or £1200, whichever should be greater.

“Our members have clearly had enough of falling living standards and day-to-day struggles to survive on appalling rates of pay.” PCS General Secretary Mark Serwotka

Additionally, the pay claim calls for a Living Wage of at least £10 an hour on all pay policies and contracts and national bargaining at Cabinet Office level on pay for all staff in the Civil Service and its associated bodies. This bargaining power will, the union hopes, lead to the establishment of a common pay and grading structure across the Civil Service, equal pay for work “of equal value” across the service, and eradication of “the inequities caused by the delegated bargaining system”.

Mark Serwotka, who described the fact that a number of government departments, including HMRC, have recently been forced to raise pay rates for their lowest paid workers in order to comply with the statutory National Minimum Wage, commented on PCS’s latest demands, saying: “Our members have clearly had enough of falling living standards and day-to-day struggles to survive on appalling rates of pay.

“Action must now be taken to address this situation, alongside action to address the structural problems within pay systems in the Civil Service and its related bodies.”

“The government must recognise that not only do the general public do not support austerity pay policy, but that an overwhelming majority of civil servants are willing to take action for fair pay.” PCS Scotland National Officer Lynn Henderson

PCS Scotland National Officer Lynn Henderson also commented, saying: “The recent PCS ballot result confirmed that thousands upon thousands of public and civil servants are prepared to take industrial action should pay this year fall short of their needs. These workers are not asking for extravagant salaries: they are demanding a wage they can actually live on.

“The government must recognise that not only do the general public do not support austerity pay policy, but that an overwhelming majority of civil servants are willing to take action for fair pay. We have asked to meet to discuss these pressing issues facing our members, and the Tories ignore us at their peril.”

The PCS campaign on pay has also been aimed at the Scottish Government, which announced an end to the public sector pay cap in Scotland in draft budget last December, though Finance Minister Derek Mackay highlighted the fact that in some respects, his options were limited by the UK Treasury.

The Cabinet Office was approached for comment, but had not responded at the time of publication.