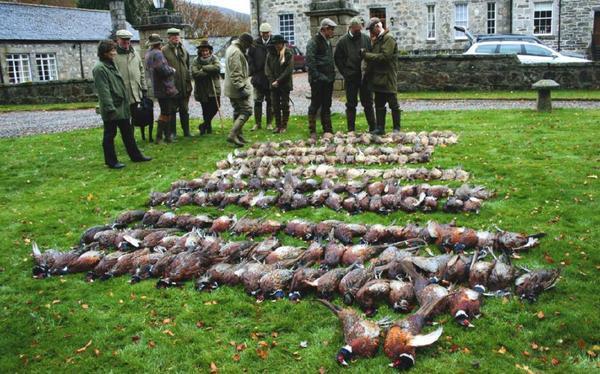 A BUST of Margaret Thatcher, access to four Conservative Cabinet Ministers and a weekend shooting pheasants were all for sale at a multi-million pound banquette for rich Tory donors this week.

The ‘Black and White Ball’, which attracted businesspeople, financiers and politicians on 10 February, cost up to PS15,000 a table for entertainment at Grosvenor House in Mayfair, London.

Prime Minister David Cameron addressed the event: “I need your help. You have done so much to support me over the past years, before the last election and since, and I cannot adequately convey how grateful I am,” according to reports in the Daily Mirror.

Cameron asked attendees to “dig deep” to fund his party.

In response, an unknown Tory donor paid PS110,000 for a weekend at a Devon shooting estate.

The six-figure payment was to shoot 500 pheasants, a ‘sporting’ practice common on Scotland’s mammoth private estates.

Writer Alan Cochrane previously revealed that Cameron has a soft spot for shooting wildlife, and shot some pigeons in Scottish woodland with the Telegraph editor.

Cameron “moaned about the fact that he couldn’t go deer stalking any more” to Cochrane. At a meeting between the two in Fife, Cameron explained that he had “fancied a bit of shooting, so took his 12-bore [type of gun] out into a wood near his home and bagged a couple of pigeons.”

The prime minister’s family also own a 20,000 acres estate on Jura.

Shooting estates were granted tax exemptions by the Tories in the 1990s.

The event auction including paying for dinner with Michael Gove MP, running with Iain Duncan Smith MP, shopping with Home Secretary Theresa May and a posh dinner with Sajid Javid MP.

In March 2012, Tory co-treasurer Peter Cruddas sought payments of PS250,000 for access to the prime minister and chancellor.

That same month chancellor George Osborne cut the top rate of income tax on the rich, to the outrage of Labour MPs.

A major hedge fund Tory donor, commenting in the Financial Times, explained the political influence of donations: “There probably aren’t many votes in cutting the 50p top rate of tax, but among those that give significant amounts to the party, it’s a big issue, and that’s probably why it’s a big issue for the party too”.

The single event in Mayfair was estimated to have raised PS3m for the party’s General Election campaign.