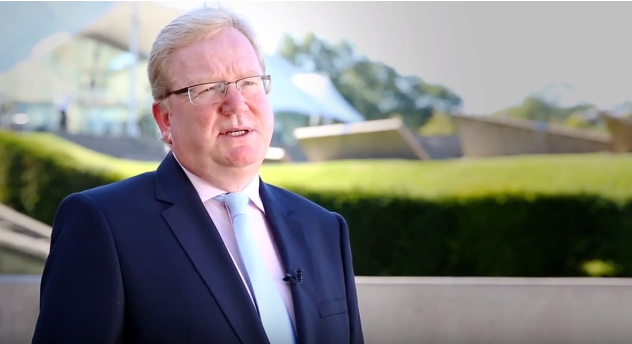 SCOTTISH CONSERVATIVE MSP Jackson Carlaw has come under fire after singling out SNP MSP Humza Yousaf and Labour MSP Anas Sarwar in a call for condemnation of reports that pro-Israeli groups were blocked from a Glasgow Stand Up to Racism on Saturday.

Scotland’s only two BME (Black and Minority Ethnic) MSPs, Yousaf and Sarwar are both Muslim and have recently spoken out on the issue of racism and Islamophobia in politics and wider society.

Tweeting on Monday evening, Tory MSP for Eastwood Jackson Carlaw said that the blocking of the Confederation of Friends of Israel and other pro-Israeli groups at an anti-racism march was “unacceptable and I hope & expect an equally robust response and condemnation from @HumzaYousaf & @AnasSarwar”.

Unacceptable and I hope & expect an equally robust response and condemnation from @HumzaYousaf & @AnasSarwar https://t.co/pCjpZGMx6U

Many expressed “confusion” at the tweet, including Sarwar and Yousaf themselves. Yousaf noted that he had not been at the event, adding: “It would be dangerous, innacurate & lazy to characterise Middle East conflict as one between Muslims Vs Jews. All of us should condemn racism not just my & @AnasSarwar responsibility.”

Speaking to CommonSpace, Carlaw offered an explanation for his comments: “They both gave a fantastic interview over the weekend about racism and Islamophobia, and they are the only two Muslim MSPs at the Scottish Parliament able to speak about what this means to them.

“There are no Jewish MSPs, so no other MSP can speak to this experience of being subject to this kind of discrimination.

“Clearly it’s an issue for us all, but I can’t speak on it with the same moral authority because I’m not able to understand that experience directly.”

However, he acknowledged, “some people have chosen to interpret it in a different way”.

Asked about the perception that the comment had drawn links between the Muslim MSPs and the Israeli/Palestinian conflict, he stressed: “I was talking specifically about anti-Semitism.”

According to a report in The Herald newspaper, which Carlaw shared on Twitter, an anti-fascist group called Red Front Republic have said they took action along with others to block the participation of pro-Israeli groups as an act of solidarity with the Palestinian people, chanting: “Stand up to racism, stand up to Zionism.”

Carlaw suggested that many people in his constituency – an area with one of the highest Jewish populations in Scotland – would value seeing MSPs take leadership on the issue of anti-Semitism and to articulate it in a way that other people from minority communities may not have the same opportunity to do.

He added: “This has brought home the fact that there are no Jewish people, Sikhs, or other minority groups in this parliament.”

Asked his view on Carlaw’s explanation, transport minister Humza Yousaf told CommonSpace: “I suspect Jackson Carlaw’s tweet was nothing more than clumsy. People must be careful not to give the impression that it is merely the duty of victims of racism to speak out against it.

“We all must speak out against hatred in all its forms.”

READ MORE: Omar Afzal: Why Scottish attitudes towards Muslims are not as progressive as the country often thinks

“Equally, for anyone who thinks anti-Semitism doesn’t exist in Scotland, it does and I will always confront and challenge it wherever I see it.”

Labour MSP Anas Sarwar echoed Yousaf’s remarks on the need for all individuals and communities to speak out on racism. He said: “Only Jackson Carlaw can explain his bizarre tweet. I’ve spoken before about dinosaurs and their behaviour, I wonder if this fits in that category.

The two MSPs appeared together on the BBC’s Sunday Politics Scotland, where they reported receiving death threats via social media and email and said that people from Muslim communities and other faith groups had reported facing increasing levels of Islamophobia and racism.