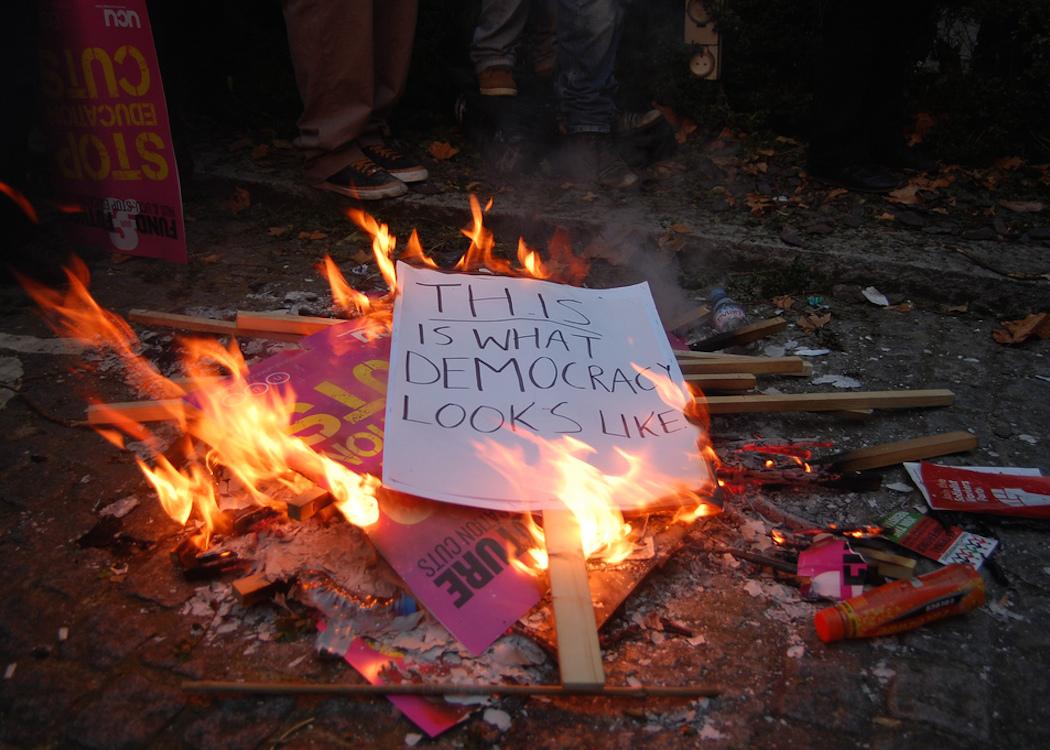 THE TORY PARTY spent centuries opposing the extension of democratic rights in Britain.

Over just six years of government, the party has launched a crackdown on a vast array of civil liberties and political freedoms.

Commonspace looks at 10 examples of Tory restrictions on democracy.

1. Removing the poor from the electoral register

Tory changes to voting rights are set to strike poor families , traditionally most likely to vote against the party, from the registration list.

2. Attacking the rights of trade unions to organise

The anti-Trade Union Bill will restrict the right to strike, right to organise in the workplace and even prevent councils from collecting trade union membership payments.

Workers rights have also been attacked by charging for employment tribunals, cutting off vulnerable employees from justice .

The Tories want to redrawn the boundaries for the election of MPs, a move that could boost Tory fortunes by around 20 MPs .

With a Tory majority in the house of commons, a single party can rip up the constitutional rule book in their own interest.

George Eaton of the New Statesman described this as a project “trying to make it impossible for Labour to win again.”

4. Stuffing the Lords with cronies and donors

Since his election as prime minister, David Cameron has stuffed the house of lords full of his friends, party cronies and rich Tory donors.

The lords is now one of the largest parliamentary houses in the world with over 820 members.

New ‘gagging law’ financial rules have imposed tight restrictions on charities, which has silenced political campaigning that is critical of government policies.

Save the Children, the Salvation Army, Oxfam, Greenpeace, Age UK and Amnesty International have warned the rules have a “chilling” impact on their freedom to express political views.

Tory politicians attacked Oxfam for highlighting the scale of inequality in the UK.

Heavy handed attempts to crack down on ‘extremism’ have spilled over to damage freedom of speech among Muslim communities and in educational institutions.

The so-called ‘counter-extremism bill’ has faced accusations it will criminalise free speech and peaceful policial activity, and therefore generate a wider extremist backlash .

The Tory ‘Prevent’ programme encourages public employees, including teachers in schools and universities, to monitor and report pupils who exhibit dissident political leanings.

Scotland Against Criminalising Communities have described it as a “manipulative, discriminatory and Islamophobic programme to suppress political dissent”.

The Tories plan to use procurement and pensions powers to ban ethical boycotts of goods from illegal settlements or of abusive arms companies .

8. Relegating the rights of Scottish and Welsh MPs to second class status

The morning after the referendum on Scottish independence, Prime Minister David Cameron announced plans to reduce the voting rights of Scottish and Welsh MPs through EVEL (English Votes for English Laws).

Scottish MPs are now barred from voting on ‘English only’ legislative divisions in parliament.

Despite scandals of mass surveillance of private phone, internet and social media accounts, the government plans to increase the powers for spying, signalling a further reduction in digital rights.

Whistleblower Edward Snowden has described the plan as “the most intrusive and least accountable surveillance regime in the West.”

Home Secretary Theresa May wants to scrap the Human Rights Act, principally to reduce protections for vulnerable immigrants and for people arrested in the UK, but the scrapping of the act would have far reaching consequences for civil liberties.

CommonSpace journalism is completely free from the influence of advertisers and is only possible with your continued support . Please contribute a monthly amount towards our costs. Build the Scotland you want to live in – support our new media.