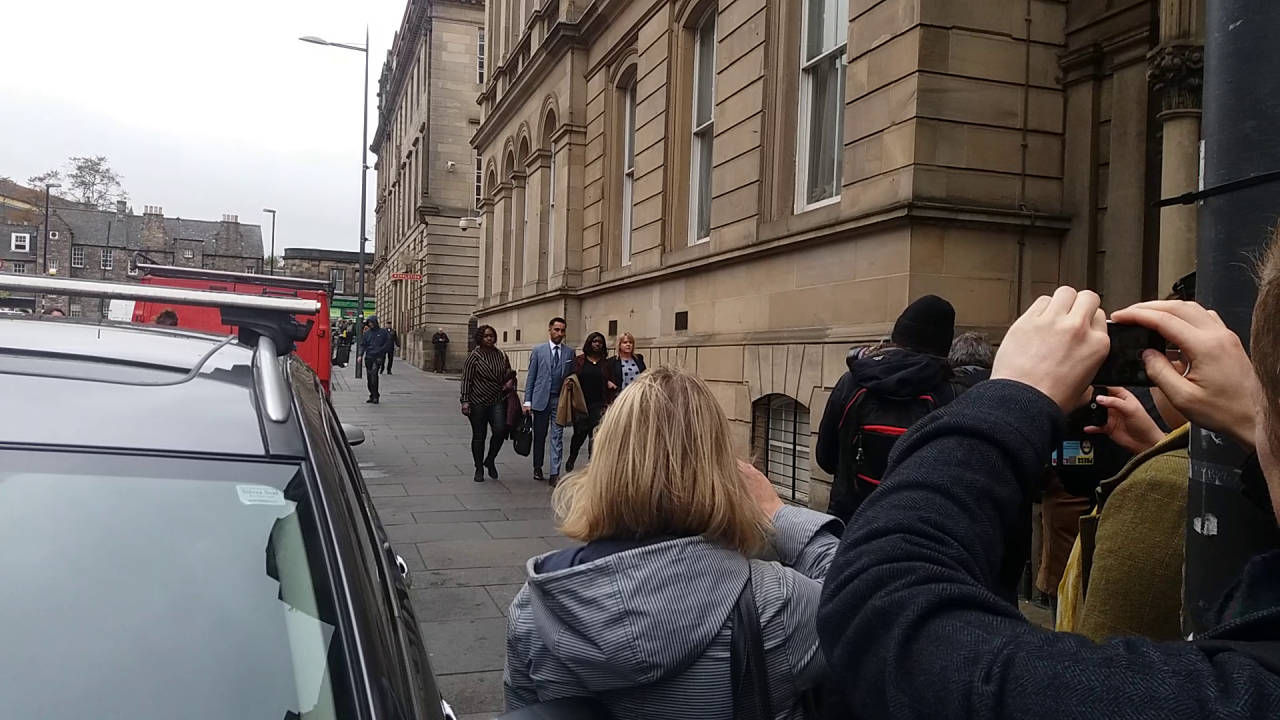 THE FAMILY of Sheku Bayoh, whose death in custody three years ago has been attributed by some to the actions of police including dangerous physical restraint, has declared they feel “nothing but total betrayal” following the Lord Advocate’s decision not to prosecute the nine officers involved.

Bayoh, a trainee gas engineer, died while being restrained by the officers on the morning of 3 May, 2015 in Kirkcaldy, Fife, after police use of batons, CS gas, pepper spray and restraints of his legs and arms following his arrest.

In the words of the Aamer Anwar, the Scottish lawyer and human rights advocate representing the Bayoh family in this matter, Sheku was “pinned to the ground” with “a minimum body weight of 60 stones pushing down on his torso.”

The Bayoh family’s position is that asphyxia was a contributory factor in his death, and that he suffered cardio-respiratory arrest during the time that the restraint was employed by the officers.

Following an extended private meeting this afternoon at Edinburgh’s Crown Office between Anwar, Bayoh’s sisters and James Wolffe, the Lord Advocate, it was announced that Scotland’s chief prosecutor will not be pressing charges against any of the officers involved in the event.

Speaking to press outside the Crown Office following the meeting, Anwar said: “The family lost all faith in the ability, competence or willingness of PIRC (Police Investigations and Review Commissioner) to deliver a robust impartial investigation over two years ago.

“Today the family is devastated and feel nothing but a total betrayal by the Lord Advocate’s decision not to prosecute any of the nine officers or Police Scotland.

“Sheku’s family believe they have been failed by those who have a duty to protect the public and uphold the rule of law.”

“Sheku’s family believe they have been failed by those who have a duty to protect the public and uphold the rule of law.” Bayoh family lawyer Aaamer Anwar

In a possible reference to the fact that the Lord Advocate’s decision appeared to have been leaked to press in September, Anwar continued: “There have been repeated attempts by police sources to print lies, criminalise, speculate and smear Sheku in his final moments.”

While Bayoh was under the influence of drugs at the time of his arrest, Anwar acknowledged, “he did not deserve to die.”

Anwar went on: “We now know he did not attack the police with a knife, did not brandish one, nor was he carrying one when the police arrived.

“Did the Lord Advocate really think Sheku’s life was so cheap that his family would just walk away?

The case of Bayoh, said Anwar, “is riddled with double standards.” Anwar asked, if nine civilians had restrained a member of the public who subsequently died, would three years have been taken over a decision to prosecute?

Following their meeting with the Lord Advocate, the Bayoh family and their legal team left for a meeting with the Scottish justice minister Humza Yousaf, but declared prior to leaving the Crown Office that they will “accept nothing less than a public inquiry from the Scottish Government.”

The police have previously claimed that the techniques used while restraining Bayoh were proportionate.

Following the meeting at the Crown Office, the Scottish Greens justice spokesperson John Finnie MSP also called for a public inquiry into the case, writing to Scottish ministers to ask whether PIRC had all the relevant powers to properly investigate such incidents.

Finnie commented: “The [Bayoh] family quite rightly looked to the Police and Investigation Review Commissioner to lead the investigation and provide independence from the police. The PIRC has only been in place for the last five years and fortunately deaths are rare – however, it is worrying that they didn’t receive the fullest cooperation from all those involved.

“The Scottish Green Party have always supported a thorough investigation of the circumstances leading to Mr Bayoh’s death such as the family’s request for a full judicial public inquiry.” Scottish Green MSP John Finnie

“No-one is above the law; however, everyone, including police officers, must have the right not to self-incriminate and procedures should be robust enough to ensure that basic right. Of course, the right to life is fundamental to us all and, regardless of whether there are to be criminal prosecutions, misconduct proceedings or a Fatal Accident Inquiry it’s important that Scotland shows the value it places on a life.

“The Scottish Green Party have always supported a thorough investigation of the circumstances leading to Mr Bayoh’s death such as the family’s request for a full judicial public inquiry under the Inquiries Act to be ordered by the Justice Secretary. There are wider considerations which go beyond this case that must be fully understood. Our thoughts are with Mr Bayoh’s family and friends.”

Also commenting, Labour MSP Claire Baker said: “It has been three years since Sheku Bayoh died while in police custody and his family are still having to fight for answers.

“They have shown incredible courage in their quest for justice and the support for their campaign is a testament to that.

“It is difficult to have confidence in the Lord Advocate’s decision when the evidence on which it is based has been kept from the public.

“That is why it is right that there should be a full and transparent public inquiry into Sheku Bayoh’s death.”

The campaign group Scotland Against Criminalising Communities (SACC) endorsed calls for a public inquiry prior the announcement of the outcome of the meeting. Richard Haley, Chair of SACC, said: “Too often, the Scottish Government acts as if it has an overriding duty to protect the institutional interests of the police. It needs to remember its duties to the Scottish people and the law.

“The Scottish Government can either wait and see whether it can be legally forced into holding public inquiry, or it can do the right thing, right now.” Scotland Against Criminalising Communities chair Richard Haley

“The Scottish Government can either wait and see whether it can be legally forced into holding public inquiry, or it can do the right thing, right now.”

While awaiting a statement on the results of the meeting with the Lord Advocate, supporters of the Bayoh family gathered outside of the Crown Office, showing their support via a candlelit vigil.

Speaking to CommonSpace prior to Anwar’s announcement, Tejas Mukerji, founding member of the left-wing SNP pressure group Neutral Scotland, commented on the proceedings: “There need to be prosecutions – there has to be prosecutions for this. I do hope in the future there is some kind of inquiry into not only how this happened, but why did it take so long for the process to kick into place? It shows there are deep, procedural problems going on with Police Scotland, in addition to the institutional issues we already know about.

“Beyond that, my solidarity is with the family and Sheku and Aamer. There needs to be more outspoken political leadership on this issue. I feel like the parties have been too timid, too quiet. Things like this, you have to make a stand.”