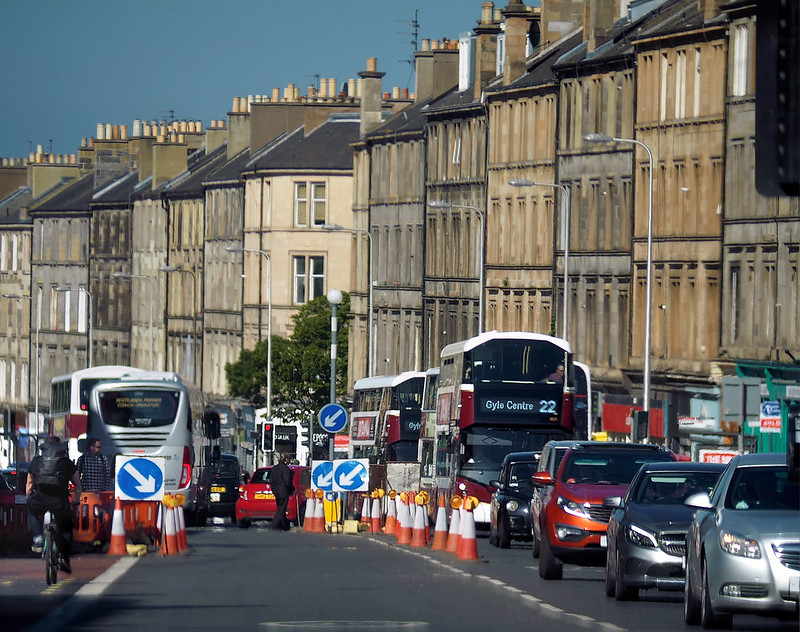 In one year 354 deaths in Glasgow were linked to air pollution, according to new research

TOXIC air pollution has been linked to hundreds of deaths in Scottish cities, including 3.7 per cent of all deaths in Edinburgh, new data has suggested.

More than one is 29 deaths in Scotland’s largest cities and towns could be related to longterm air pollution, according to new figures from the urban policy research unit the Centre for Cities.

Deaths linked to the deadly pollutant PM2.5 – which refers to both man-made and naturally occurring solid particles and liquid droplets such as ash, dust and sea-spray – are highest in Glasgow, where toxic particles in the air contributed to 354 deaths in one year.

Edinburgh saw the highest proportion of deaths related to PM2.5, with data suggesting exposure to the toxin was linked to 3.7 per cent of all adult deaths in the city in just one year.

Glasgow saw the most deaths overall in Scotland, with 354 linked to toxic air in one year. Meanwhile, Aberdeen had the lowest proportion of such deaths (3 per cent) out of all Scottish cities.

In total, 628 people aged 25 or over were killed by PM2.5-related deaths across all Scottish cities.

Due to their distance from London, by far the biggest emitter of PM2.5, Scottish cities had a lower proportion of deaths linked to pollution.

Speaking to CommonSpace, Friends of the Earth Scotland air pollution campaigner Gavin Thomson warned the estimates were at the “lower-end” of fatality estimates seen in recent years and looked at only one kind of pollutant.

Thomson said: “We know that air pollution is a killer and is particularly dangerous to the young, the elderly and those with existing health conditions.

“Our priority must be measures that reduce traffic in towns and cities to protect the most vulnerable in Scottish society.

“Councils and Government have known for years about the devastating impact of air pollution on our bodies yet they are choosing to adopt weak measures or delaying the necessary action. The UN climate negotiations coming to Glasgow in 2020 should be a wake-up call to start prioritising greener transport over fossil-fuelled cars.

“To tackle both the public health crisis and the climate emergency, the Government should commit to no new road building, and investing the billions that would save into public transport, walking and cycling,” Thomson said.

FoE Scotland recently released a tool showing Scotland’s most polluted streets, with some areas seeing an increase in pollution in breach of air quality limits.

The Centre for Cities says that although transport emissions are significant, half of the deadly PM2.5 toxins in cities were generated by wood-burning stoves and coal fires.

The research body said such wood-burning stoves and coal fires could be banned in areas where air pollution exceeded guidelines, and has called on the Scottish Government to do more to incentivise local government to improve air quality. The Centre has also called upon the UK Government to make plans to tackle cross-border air pollution a “key component” in future relationship talks with the EU.

Andrew Carter, chief executive of Centre for Cities, said: “More than half of people in the UK live in cities and large towns. And while they offer people good employment and lifestyle opportunities Cities Outlook 2020 shows that they also having a damaging effect on their health, with air pollution killing thousands of people living in cities every year.

“To help the government needs to provide the Scotland councils with extra money and introduce stricter guidelines. Failure to act now will lead to more deaths in Scotland.”

Responding to the figures, a Scottish Government spokesperson said: “We launched the independent review of air quality strategy, ‘Cleaner Air for Scotland – The Road to a Healthier Future’, in November 2018.

“We will now consider in detail the recommendations and wider views and will consult on a revised strategy this year. The issue of domestic wood-burning stoves is being considered as part of that review.”