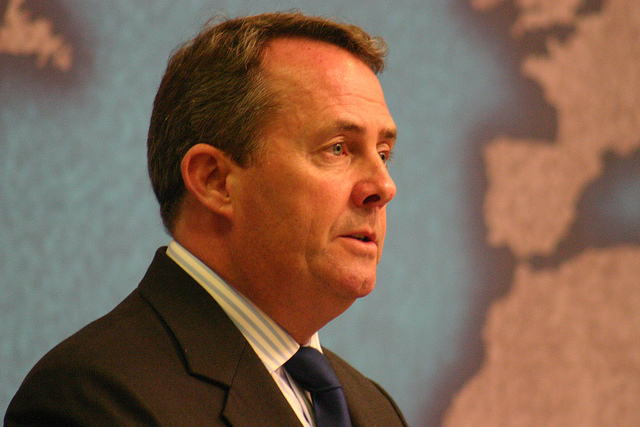 David Lawrence Trade Justice Movement: “Thursday’s debate could be the only chance for MPs to debate these deals, and does not offer any assurances that MPs will be able to influence negotiations, access texts or get a meaningful vote on the deals.”

AHEAD of a debate in the House of Commons on Thursday [21 February] on post Brexit trade deals, trade justice campaigners have warned that a lack of proper parliamentary structures for accountability and scrutiny over the deals is set to leave enormous power in the hands of the UK Government to re-shape Britain’s economy.

“This debate simply highlights the woeful lack of democracy governing Britain’s post-Brexit trade policy,” Dearden said. “Following a pretty meaningless public consultation, which nonetheless showed how concerned we all are about the government’s trade plans, the Secretary of State is expecting to simply start negotiating these deals in six weeks’ time. Neither parliament nor the public are allowed to stop Liam Fox negotiating away our food standards or our public services. This must change before it’s too late.”

The call comes as Liam Fox, Minister for International Trade, struggles to pull together trade deals with other major economies in time for Brexit, despite stating they would all be ready to go for “one second past midnight” of 29 March, the day Britain is set to officially leave the EU.

Bloomberg reported on comments from Business Secretary Greg Clark, who has been outspoken about his view that No Deal Brexit should be taken off the table, despite this being firmly opposed by Prime Minister Theresa May. Clark said on Tuesday [19 February]: “Unfortunately not all of the FTAs — and I might mention the Japan and Korean ones that are important — are expected to be concluded in time. That is one of the reasons why I think it is so important that we should not leave without a deal.”

The campaigners said that no framework had been established by the UK Parliament to replace the EU’s current scrutiny and accountability mechanisms, leaving trade deals – which could agree to contractual obligations effecting all parts of the British economy – solely in the hands of the UK Government. The US has suggested that any trade deal would likely have to mean a lowering of food standards in the UK, with US chlorified chicken – currently banned in the UK – one of the products which could enter British supermarkets after any deal.

David Lawrence of the Trade Justice Movement said there was a real concern the House of Commons debate on Thursay could be “the only chance” for MPs to get a say on trade deals.

Lawrence said: “Despite his previous promise, that MPs will be given “the opportunity to consider… the Government’s approach to negotiations and the potential implications of any agreements”, Liam Fox has yet again demonstrated that he does not take Parliamentary oversight of trade deals seriously. Trade deals with places like the US could have massive impacts on social rights, the environment, food and health standards in the UK.

“The current process for agreeing trade agreements give MPs very little say. Thursday’s debate could be the only chance for MPs to debate these deals, and does not offer any assurances that MPs will be able to influence negotiations, access texts or get a meaningful vote on the deals.”

A Government consultation on post-Brexit trade deals led to what is believed to be the biggest public response to a consultation in history, with 600,000 individuals and organisations expressing concerns about the impact the deal could have on food standards, the NHS and the introduction of ‘corporate court’ systems which could lead to the British government being sued in secret tribunals by some of the biggest companies on the planet.

READ MORE: TTIP, the myths, and why the implications of the much-hyped trade deal don’t stop at the NHS

Trade justice campaigners previously opposed the use of corporate courts in trade deals when they were mooted in negotiations between the EU and US over the Transatlantic Trade and Investment Partnership. TTIP was put on ice after Donald Trump’s election to the US Presidency, but negotiations over a similar deal began in July 2018.

Jean Blaylock of War on Want said that any UK-US trade deal should have a meaningful vote in the UK Parliament before it’s signed off.

She stated: “We know the Secretary of State has a lot riding on doing a deal with the US but we don’t know what he is prepared to offer to get it. Thursday’s debate may be the only chance to find out. But more than that, it may be the only chance for parliament to have any say before an eventual deal is implemented. Trade officials can start negotiations, do the deal behind closed doors, finish and sign it, and parliament isn’t even guaranteed a vote on the final deal.”

CommonSpace contacted the UK Department of International Trade for comment but they did not respond by time of publication.