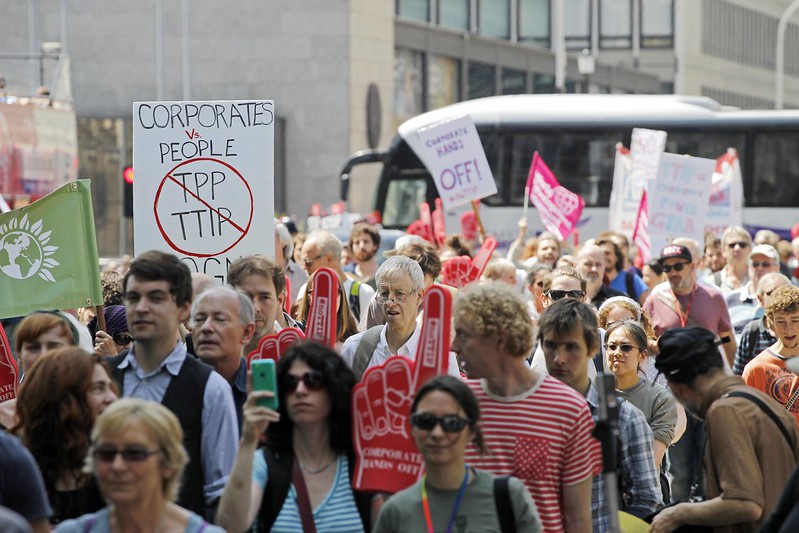 A CITIZENS’ MOVEMENT equal to the Europe-wide mobilisations against the Transatlantic Trade and Investment Partnership (TTIP) will be necessary to oppose the possibility of a ‘sweetheart’ trade deal between the governments of Prime Minister Boris Johnson and US President Donald Trump, the Trade Justice Scotland Coalition has argued.

Five days prior to the 31 October Brexit deadline, the Trade Justice Scotland Coalition – a collaboration of Scottish trade unions, campaign organisations and local activists agitating for a more ethical trade policy – will gather in Glasgow to argue that action must be taken to prevent any US-UK trade deal similar to TTIP, which faced mass-protests across the EU over its potential impact on public services, workers’ rights, and food and environmental standards.

The possibility of such a deal post-Brexit was recently raised by US Vice President Mike Pence, who said during a speech in London last month: “The moment the UK is out, America is in.”

At the conference Trade Justice For All: Another World is Possible, speakers will argue for the need to build a mass-movement to campaign against a deal that favours corporations and forces a rethink of UK trade policy in a post-Brexit context, focusing instead on improving human rights, the regulation of workers’ rights and environmental protection.

“Trump’s administration has already told us what it wants in a deal, and it’s very worrying – chlorine chicken, higher prices for medicines, and an end to any attempt to rein in the power of Silicon Valley big tech firms.” Global Justice Now campaigner Jean Blaylock

Commenting ahead of the event, Global Justice Now campaigner and keynote speaker Jean Blaylock said: “We know that Johnson’s government wants to do a trade deal with the US in a hurry. Trump’s administration has already told us what it wants in a deal, and it’s very worrying – chlorine chicken, higher prices for medicines, and an end to any attempt to rein in the power of Silicon Valley big tech firms like Google, Amazon and Facebook.

READ MORE: TTIP: What it is and why people want to stop it

“A deal like that demonstrates the need for Parliament to be able to review what’s on the table and have a vote. We need trade democracy if the Trade Bill returns.”

Arthur West, secretary of Kilmarnock and Loudoun Trades Union Council, also said: “There is interest in this event across the trade union movement. This is reflected in the fact that Sam McCartney the chair of Unison Scotland’s International Committee is one of the platform speakers. Hopefully trade unionists will turn out to this event in good numbers. “

Trade Justice For All: Another World Is Possible will take place on 26 October, 1pm-4pm, at the UNISON building, Bell Street, Glasgow. More information can be found here.