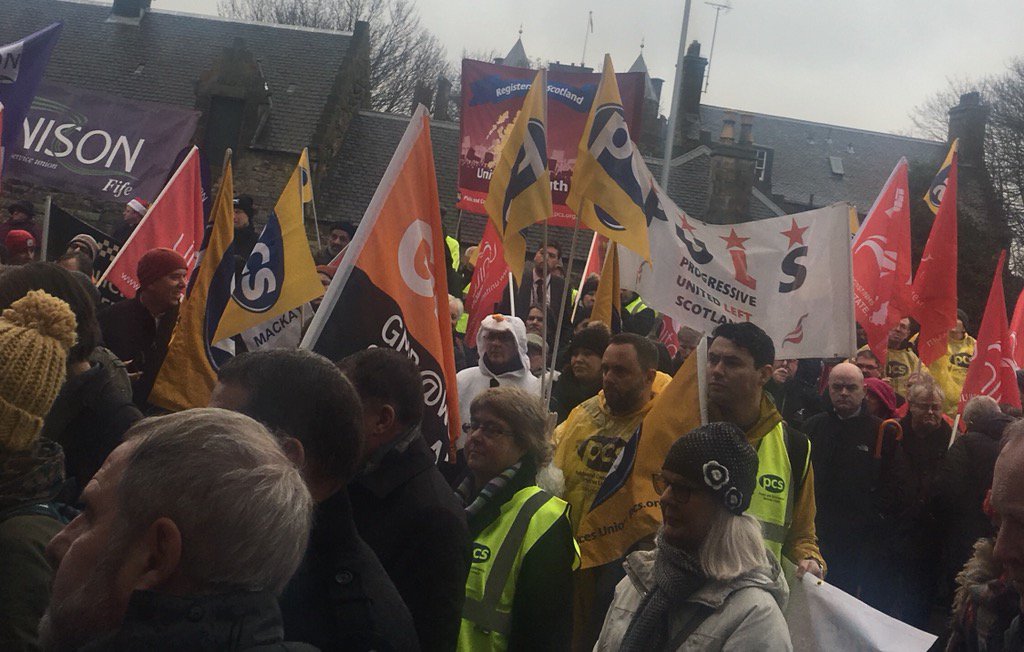 ASSEMBLING HOURS before the Scottish Budget is presented, representatives and members of Scotland’s trade union movement rallied outside the Scottish Parliament to call for significant pay increases for public sector workers and an end to public sector cuts.

READ MORE: Unions react to the end of public sector pay cap: “This is only the beginning of the fight”

In the new Scottish Budget, Cabinet Secretary for Finance Derek Mackay is expected to present new proposals on the rates of pay for public sector workers. Following the Scottish Government’s promised end to the public sector pay cap, these new rates are also expected to diverge from prior policies, which under edict from the Westminster-mandated budget, capped public sector pay at one per cent.

On Wednesday, 13 December, the STUC wrote to the leaders of all political parties in Scotland, urging them to present “meaningful” taxation and spending proposals as part of the budget debate, calling for additional spending on “first-class” public services for Scotland.

“We welcome the First Minister’s engagement with trade unions on pay and its willingness to use revenue raising powers.” STUC General Secretary Grahame Smith

Ahead of the demonstration, STUC General Secretary Grahame Smith said: “We regret that Chancellor [Philip Hammond] chose to continue with austerity, ignoring the pressures on living standards and the signs of weakness in the economy.

“We call on the Scottish Parliament to not make the same short-sighted mistakes as Westminster. Our parliament does have the capacity to halt the real terms decline in public sector wages and to begin to restore pay to acceptable levels.

“We welcome the First Minister’s engagement with trade unions on pay and its willingness to use revenue raising powers. This is in stark contrast to the approach of the UK Government.

“However, we are also on record as believing that the revenue raising options being considered are not radical enough. It is time for our parliament to be bold.”

“2018 is Judgement Day. We need to turn the political rhetoric into action, or our members will take action.” Unison Scotland convenor Lilian Mason

“Unison Scotland members across the public sector are now calling time on the pay cap and are demanding a substantial pay increase in 2018.

“This has been the worst and most sustained period in which increases in pay have fallen below increases in prices. The average public sector worker has seen a decrease in their earnings of 14 per cent since 2009.

“2018 is Judgement Day. We need to turn the political rhetoric into action, or our members will take action.

Also addressing the protest, Mary Senior of the Universities and Colleges Union said: “A Scottish Parliament is supposed to allow us to do something different. It’s supposed to avoid passing on Tory Westminster austerity. We want it to invest in vital public services, on which we all depend.

“We’ve ended tuition fees. We’ve provided free prescriptions and free personal care. But these services need to be backed up by funding.

“Like so many other public services budgets, education and higher education has seen year-on-year real terms cuts. For universities, that means job losses. It means zero hours contracts. It means increasing workloads. It means real-terms pay cuts for staff. Since 2009, university lecturers have lost over 16 per cent, in real terms, of their pay.”

In October, PCS balloted its members on public sector and found that 79.2 per cent would be prepared to action on the issue. PCS National Officer Lynn Henderson commented: “Our ballot result sent a clear message that PCS members are demanding a pay rise this year.

“In recent statements to both our union and the media, Derek MacKay has really raised workers’ expectations. If those expectations are not met, then the discontent amongst the government’s own workforce will only grow.

“Providing real funding for public services is within the government’s power and we’d like to see that presented today. The people who make Scotland’s public services work should be paid a decent wage for the jobs they do.

Picture courtesy of the STUC