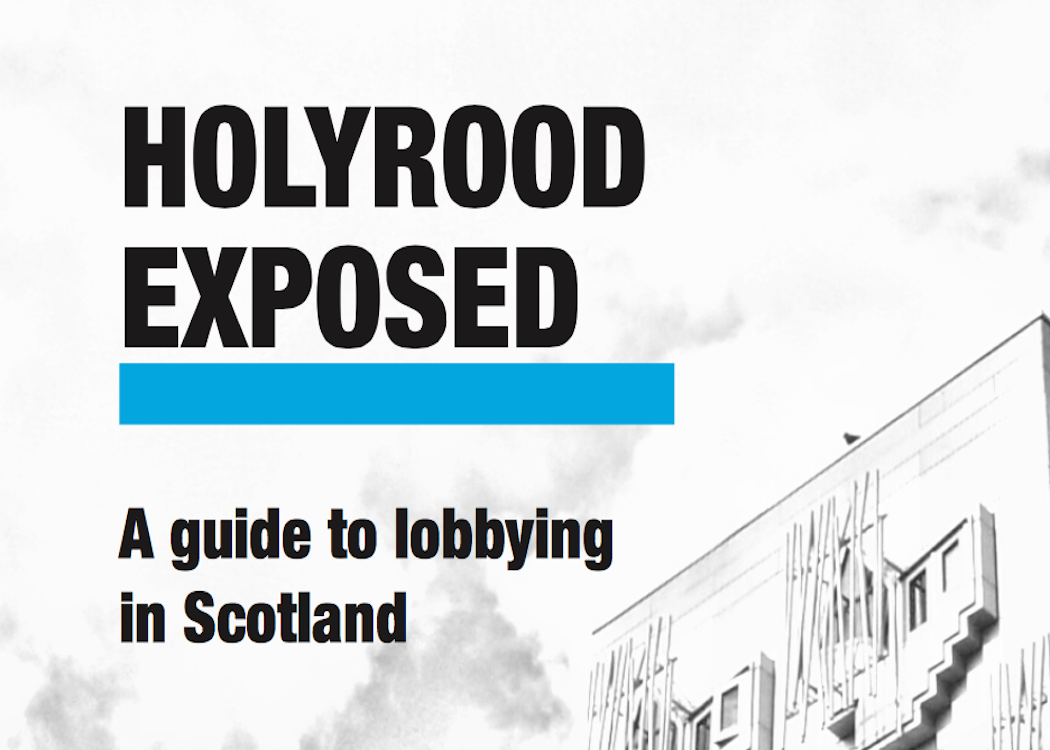 The Scottish Alliance for Lobbying Transparency (SALT) is calling for key amendments to the Lobbying Bill which is currently going through the Scottish Parliament and is set to be debated tomorrow [Thursday 7 January].

Currently the proposed bill would require face-to-face meetings between lobbyists and ministers to be recorded on a public register – but not electronic communication. SALT is asking that the scope be widened to cover all forms of communication following public polling supporting stronger regulation. They also want meetings with senior civil servants and special advisors to come under the same scrutiny as meetings with ministers.

Transparency International, a global NGO that monitors corporate and political corruption worldwide, is also backing the call for a stronger Scottish bill. Steve Goodrich, senior research officer, said: “We’re living in an age where trust in politicians and ministers is at an all-time low. This survey [carried out by YouGov] shows that there is overwhelming public support for MSPs to operate to the highest standards of transparency and do away with the perception of shady deals carried out behind closed doors.

“The government could make this transparency a reality, but only if MSPs amend the current lobbying Bill to reflect the concerns this survey highlights.”

“Democracy, like justice, must be seen to be done. It only works well if the public trust decision are being made in their broad interest and not for narrow private ones.” Katie Gallogly-Swan, Electoral Reform Society

The Lobbying Bill was scrutinised by the standards, procedures and public appointments committee, and in December 2015 its initial report was published . In it the committee expressed concern over the narrow scope of the bill, saying it could “leave a great deal of important information unrecorded and create a loophole for those wishing to conceal their activity.”

A YouGov survey commissioned by the alliance asked 1,041 adults about the Lobbying Bill in December last year. It showed that, excluding don’t knows, 87% were in favour of extending the register to cover email and telephone communication, and 91% favoured including meetings with senior advisers and civil servants.

Katie Gallogly-Swan, Campaigns Organiser at the Electoral Reform Society – also a member of SALT – said: “Democracy, like justice, must be seen to be done. It only works well if the public trust decision are being made in their broad interest and not for narrow private ones. We can see from this YouGov poll that they are deeply suspicious of big money and secret lobbying.

“Scots want openness and transparency in their government. We all have a duty to meet that expectation but our MSPs should feel that duty more strongly than anyone else. They have a choice on this Lobbying Bill, let in the light and build some trust, or keep it in the dark and harm democracy.”

Robin McAlpine, Director of Common Weal, added: “There is a lot of scope for the Scottish Parliament to face a string of minor lobbying scandals, with for example the SNP having a lot of former staff members who have moved into the lobbying industry or with Labour having former politicians going into private sector jobs.

“It really is in the interests of everyone to get this legislation strong and robust to protect politicians because if they pass weak legislation they will remain vulnerable to criticism every time one of these minor scandals rears its head. Personally, as a supporter of independence and a more equal Scotland, I am worried that if the Scottish Government spends its time firefighting because it passed weak legislation on an important issue where it is vulnerable, it simply detracts from what it needs to do to achieve these things.”

The Scottish Council for Voluntary Organisations, which represents charities and the third sector, previously spoke out against the Lobbying Bill, arguing that it would “place unnecessary bureaucratic barriers between politicians and the people they represent”.

Asked for comment, SCVO’s Director of Public Affairs John Downie told Commonspace: “It’s vitally important that a diverse range of views are heard at parliament and that the voice of smaller third sector organisations is not lost, so we urge MSPs to ensure that the Lobbying Bill remains light touch. Otherwise, it will hamper the ability of third sector organisations to engage with parliament and government about issues and causes which affect the most vulnerable people in our communities. While, it’s crucial to ensure lobbying is transparent, this should not be done at the expense of the inclusivity of the Scottish Parliament.”

Business interests have argued against the creation of a lobbying register, with the Confederation of British Industry (CBI) in Scotland saying it could have a “chilling effect”.