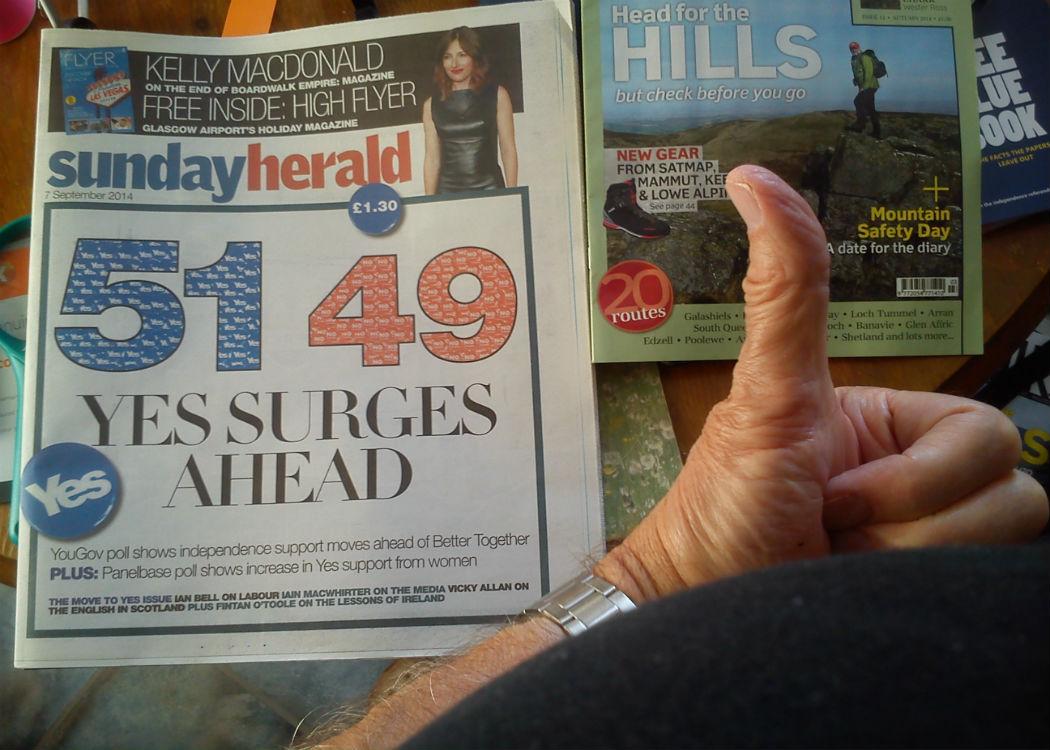 RICHARD WALKER is to stand down from his position as editor of both the Sunday Herald and The National.

Walker presided over a significant expansion in pro-independence print media in Scotland in recent times, overseeing the Sunday Herald’s decision in May 2014 to support a Yes vote in the Scottish independence referendum, and launching the pro-independence daily paper The National in the aftermath of the No vote.

The decision to have the Sunday Herald act as the standard bearer for the Yes campaign significantly increased the paper’s circulation, bucking a near universal trend of falling circulation in print media.

“He’ll be missed from the frontline of Scottish journalism,” Jamie Maxwell

In an editorial in The National , Walker said: “My own words of thanks start with gratitude to those readers who pushed the Sunday Herald to remarkable circulation figures and who welcomed The National into their lives.”

He added: “My time at the Sunday Herald and, latterly The National, has been an absolute blast.”

Walker is taking voluntary redundancy after years of deep cuts to Herald and Times Group papers, with a further cut of 20 staff announced in August 2015.

Journalist Jamie Maxwell told CommonSpace that the decision by The Sunday Herald to support independence was a crucial development in the independence referendum: “Before the Sunday Herald declared for independence, many Yes voters felt – not entirely illegitimately – that the entire UK media landscape was weighted against them.

“But the Sunday Herald’s decision – which, as I understand, was thoroughly debated by the paper’s staff, quite a few of whom wanted to remain neutral – gave the Yes campaign an intelligent, influential and critical voice of support. It has since proved commercially astute too,” he said.

“Richard acted out of a powerful blend of principle, and business acumen, in aligning the Sunday Herald explicitly with independence.” Pat Kane

“I worked with Richard for three months at the National. He’s very sincere and exceptionally hardworking. He’ll be missed from the frontline of Scottish journalism,” he added

Yes Scotland board member and commentator Pat Kane said that the hostility of most of the print media to the Yes vote made the Sunday Herald’s stance invaluable: “In a commercial media environment almost universally hostile to the Yes cause during the referendum, Richard acted out of a powerful blend of principle, and business acumen, in aligning the Sunday Herald explicitly with independence.”

“I hope that Newsquest continue to recognise the worth of Richard’s brilliantly simple (& eminently viable) proposition. That is, to give the million and a half Scots who want independence some quality newspapers that respect, inform and entertain them.”

CommonSpace and The National launched at around the same time, and have collaborated with several CommonSpace exclusives featuring in the pages of the paper. They include stories on the Carmichael memo leak , Police Scotland’s training of Sri-Lankan security forces , and moves by the Unite union to gain more autonomy over its political fund in Scotland.

Walker said he will remain as a consulting editor to The National and will be approaching “a new challenge”.

Richard Walker has achieved an extraordinary amount. His direct editorship will be sorely missed in Scottish journalism. I wish him well.

@richardwalker5 Richard Walker was the Sunday Herald. Editor for a decade..immensely capable..great loss. But hey – he’s not dead yet!

Wishing Richard Walker luck with his new challenges, though so sad to lose from the Sunday herald its genius heart http://t.co/gJaPOKtIe9

Richard Walker will go down in history as the man who saw a market for yes supporting papers and took the risk to make them happen.

Max respect to Richard Walker who was the only man smart, sexy and Scottish enough to give me a weekly newspaper column. Forever grateful.

One of my most enjoyable journalism stints ever was with @richardwalker5 @ScotNational – fun, frenetic, fabulous. Wishing him all the best.