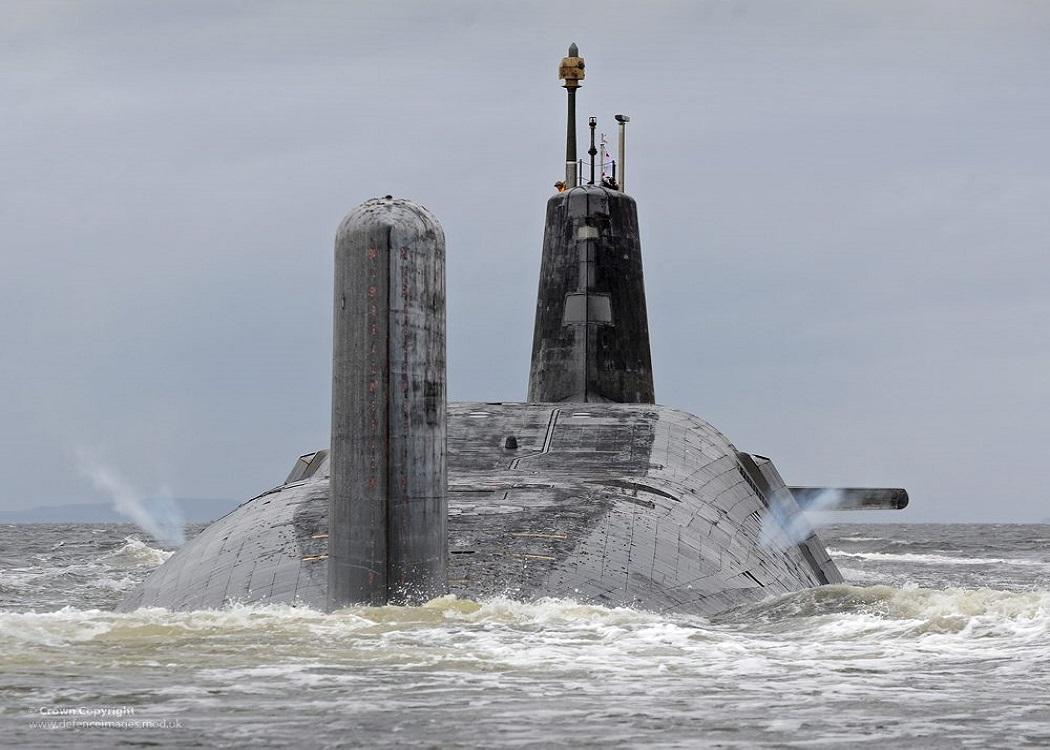 THE debate surrounding the renewal of the Trident nuclear ‘deterrent’ is a perpetual one that never appears to be out of the news in some way.

Take last week. On Monday , Labour went into (another) nuclear-grade meltdown over the ‘thorny’ issue (pun intended) of the party’s stance on the matter, with the GMB Union wading into the debate on Tuesday .

Thursday saw Whitehall sources suggest David Cameron will be delaying the vote on its renewal until after the EU referendum, and on Saturday the US defence secretary blundered in, urging the UK to renew the programme to keep its “outsized” role in the world, like our country was some sort of fast-food meal deal you only get in America.

How much do we really know about the detail of the finance behind Trident and the networks of power?

The UK’s Trident system consists of four submarines, each capable of carrying 16 missiles (but in line with government policy only ever carry eight). These in turn carry up to 12 warheads each (although again, policy deems a maximum of 40). One is on constant patrol, while another is under maintenance and two are either in training or in port.

The cost of the Trident renewal programme is, as is always the case, subjective. The government claims it will be PS31bn (up from PS25bn last year); activists claim the figure will be a lot higher, and the top-end amount quoted was by Reuters , estimating that over its lifetime the system will cost PS167bn.

But how much do we really know about the detail of the finance behind Trident and the networks of power? I delved deeper into the murky waters of vested and financial interests that surround the world’s nuclear weapons – and the results were telling.

To understand why the current UK Government and its predecessors are just so keen on keeping our ‘deterrent’ – ignoring the advice of so many independent bodies – as always the first place to begin is the House of Lords.

Lord Hollick, who was a member of the select committee on economic affairs which gave evidence against Scottish independence , is also a director of a company called Honeywell, which has a contract with the government to develop systems to extend the life cycle of Trident.

I delved deeper into the murky waters of vested and financial interests that surround the world’s nuclear weapons – and the results were telling.

Lord Hague, director of Intercontinental Exchange Inc. (a company which deals in the trading of stocks and shares, including defence) is also chair of the Royal United Services Institute (RUSI) , which advises government on defence policy.

By my calculations (checking every member’s interests against those companies involved with the Trident), over 15 per cent have what can be deemed as ‘vested interests’ in either the corporations involved in the programme or the institutions that finance them, and this is just for our nuclear capability – one suspects the percentage for defence in general would be higher.

While we’re on the subject of RUSI, on 4 February this year Malcolm Chalmers, director of research there, participated in a debate on Newsnight where he asserted it was “most unlikely that [Trident] will be phased out … I see no evidence for that”, while promoting the myth that the main argument against nuclear weapons was a “moral” one – because we couldn’t spend PS167bn in a better way, obviously…

This stance from Chalmers on Trident (and RUSI’s previous proposals of merely scaling back the programme) is unsurprising when you consider the links to the House of Lords I mention above – even less so when you take into account that RUSI is sponsored by four companies directly involved in Trident – Babcock, Lockheed Martin, Raytheon and Rolls Royce.

The rot surrounding the rabid disease of cronyistic, chumocratical influence in Westminster putridly festers in the banks.

But there’s more. The rot surrounding the rabid disease of cronyistic, chumocratical influence in Westminster also putridly festers in the banks. A report by the International Campaign to Abolish Nuclear Weapons (iCan) cited 41 UK-based financial institutions that invested directly in the nuclear weapons industry (including Labour Party bankrollers the Cooperative); institutions which can be found splattered across the House of Lords register, riddling the government external appointments list (note HSBC’s former directors Lord Green, Rona Fairhead of the BBC Trust and Ruth Kelly of the FCA); and on the headers of numerous political party consultations.

But, here’s the real crux of the matter regarding financial institutions and the system as a whole’s involvement in the nuclear weapons industry – they don’t just bat for ‘our team’.

Almaz-Antey is a state-owned Russian defence industry manufacturer, responsible for at least 26 sub-operators, which predominantly develops anti-aircraft defence systems. It gained notoriety after it was suggested that it was one of its BUK surface-to-air missiles that shot down flight MH17 over Ukraine in 2014.

Funding for Almaz-Antey generally comes from either the Russian Government directly, or via the state-owned Vnesheconombank (VEB) development bank – for example, in 2012 Almaz received RUB 35bn from the Defence Ministry and 25bn from VEB to develop the S-500 Prometey air and missile defence system – touted to be the most advanced on the planet .

Being ‘state-owned’, however, doesn’t always mean state-funded, as an archived press release from 2011 shows. In April of that year VEB signed an agreement for a syndicated loan worth $2.4bn, from 19 banks – and they were all outside of Russia.

But, here’s the real crux of the matter regarding financial institutions and the system as a whole’s involvement in the nuclear weapons industry – they don’t just bat for ‘our team’.

UK institutions included Barclays and HSBC, and other prominent contributors were JP Morgan, Morgan Stanley and Credit Suisse – five of the very same banks that were also listed on iCan’s report as funding/investing in Western nuclear programmes.

This example is not, however, some fluke. Uralvagonzavod, which develops Russia’s anti-aircraft tanks, deals with the country’s Sberbank . It, in turn, is 43 per cent retained by ‘international legal investors’ (the detail of which I cannot find), and owns PS87bn of assets across the OECD countries. Furthermore, Barclays is also involved, having bid for the contract to supply the bank with an RUB 3.5bn credit line.

Rostec State Corporation (an umbrella company for 663 other organisations, mostly relating to the military) owns and is part-financed by Novikombank – which in turn is financed by Deutsch Bank, Credit Suisse and – yes, you guessed it – Barclays.

Note also that the latter runs investment operations in the country, and has been assisting the Russian Government with the privatisation of state assets. But perhaps the most disturbing part of this is who finances Russia’s Trident equivalent – the Dolgorukiy class submarine programme .

Manufactured by a company called Sevmash , it receives its financing from the state-owned VEB bank. So yes, correct – Barclays and HSBC, both UK banks, are both directly funding Trident via investment and financing arrangements with Rolls Royce, BAE Systems and Babcock in the UK, while also indirectly funding the equivalent nuclear deterrent of UK ‘enemy’ Russia.

Get it yet? Multinational corporate banks are playing one big chess game – except it’s all make-believe and there will never be a checkmate.

Multinational corporate banks are playing one big chess game – except it’s all make-believe and there will never be a checkmate, because that would be unprofitable. Governments willingly participate – those in charge are invariably shareholders in weapons manufacturing companies or their financiers.

We are not living in some Sean Connery-era James Bond film. The world is intrinsically too financially entwined for either the East or West to ever press ‘the button’ – and to believe they would is, in my opinion, deluded.

You want a comparison of the current state of the planet and a Bond film? Try Spectre. A group of unelected corporate terrorists pulling the strings of government – or the ‘military industrial complex’ if you prefer (although Eisenhower’s theory now pales in comparison with the reality).

Perhaps what sticks in the throat the most, however, is one bank I haven’t mentioned: the Royal Bank of Scotland.

The bank that we, the public, hold an 84 per cent stake in after the 2008 financial crash. A bank that invests not only in 10 companies that are involved in Trident, but is also a financier of Russia’s VEB bank. So therefore a bank which invests in Russia’s nuclear deterrent, as well as ours.

We are fundamentally providing the money to pay for both the East and the West’s nuclear weapons – and then to add insult to injury we pay for our own, again, via taxation.

We are fundamentally providing the money to pay for both the East and the West’s nuclear weapons – and then to add insult to injury we pay for our own, again, via taxation.

The whole nuclear weapons industry, the flaccid phallic posturing, the stern, brow-furrowing arguments for maintaining it – all are a con of epic proportions. We, the public, are being deceived left, right and centre into allowing fraudulent governments to squander our money on something which merely serves to inflate the wealth of those involved.

There is no threat – except from our own foolhardiness for sleep-walking for decades and allowing this to continue happening.

The sooner we wake up, the better.