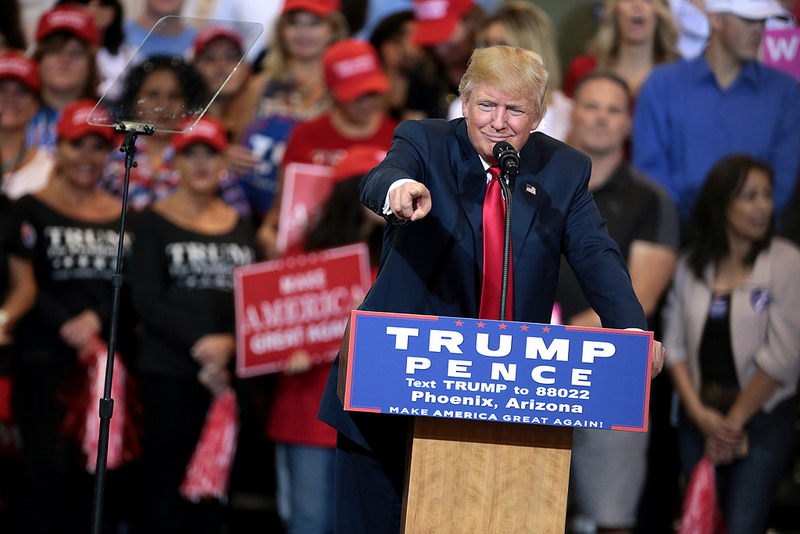 Despite claims that a million people may take to the streets to protest his upcoming visit, the US president has said he is “very popular” in the UK

US PRESIDENT Donald Trump gave his first international interview on Sunday, blasting the EU as “unfair” and claiming to be “very popular” in the UK.

Filmed at the World Economic Forum in Davos, the controversial president was interviewed by his longtime friend and ally, the broadcaster and former newspaper editor Piers Morgan.

Trump claimed to love the UK and Scotland, saying that he missed not being able to visit the country as regularly as he did before being elected: “One of the biggest problems I have in winning, I won’t be able to get back there so often. I would love to go there.”

“I get so much fan mail from people in your country. They love my sense of security, they love what I’m saying about many different things.” US President Donald Trump

Speaking about his popularity in the UK, Trump claimed that he was incredibly popular and told the seemingly sceptical Morgan that he received “so much” fan mail from the UK: “I get so much fan mail from people in your country.

“They love my sense of security, they love what I’m saying about many different things.”

The president also revealed that he had been invited by Theresa May, who he met with at the Davos forum, to visit the UK twice in 2018. He said: “Yeah, I’ll be there. [Theresa May] just invited me. Twice. State and working. One is a State, October.”

The invitation was confirmed by Downing Street.

When pressed by Morgan on his popularity claims and the calls for a ban on him visiting the UK, the president said: “Well, that’s their problem. I could very nicely stay home.”

On Jeremy Corbyn’s calls for his UK visit invitation to be rescinded, the president said: “I don’t know the man.”

The president also spoke of his love for Scotland and mentioned his two golf clubs at Menie and Trump Turnberry.

Trump’s mother was born on the Isle of Lewis in Stornoway before she left the island for New York, where she met Trump’s father. Trump described Stornoway as “very Scottish.”

His Aberdeen golf club was controversially given a green light by the Scottish Government and opened in 2012 after years of clashes with local residents.

The business mogul was previously a “GlobalScot business ambassador”, tasked with representing Scotland’s business interests abroad, but the title was stripped from him in 2015 by Nicola Sturgeon after his comments about Muslims.

After the interview was aired, the campaign group organising protests over Trump’s UK tour repeated claims that they expect over a million people may take to the streets.