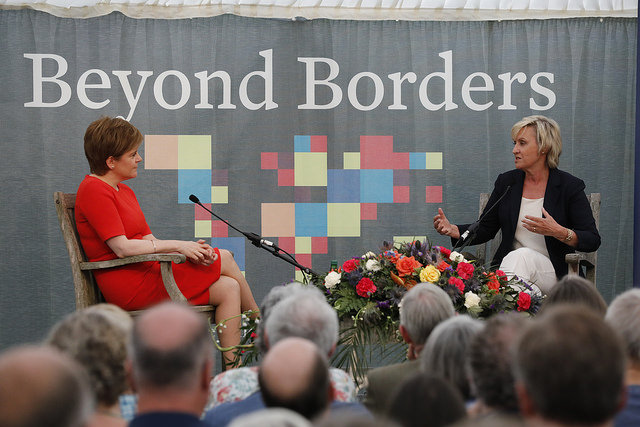 AN ECLETIC line-up of headliners will address some of the most pressing issues of the modern age, as well as paying tribute to the relevance of history at the upcoming Beyond Borders International Festival this summer.

Taking place at the historic Traquair House in Innerleithen on 25 and 26 August, the festival – now entering its ninth year – is coordinated by Beyond Borders Scotland, an Edinburgh and Scottish Borders-based NGO dedicated to “fostering peace and greater understanding between peoples, small nations and different cultures from around the world.”

Highlights at BB18 – the ninth such festival – will include appearances by New York Times award-winning Hard Truths exhibition – which details the recent history, conflict and upheavals in areas such as Iraq and the Philippines – and former CIA operative Valerie Plame, whose identity was famously leaked to the press by a member of the George W. Bush administration.

Discussing the Good Friday Agreement, Monica McWilliams, one of its architects, will be in conversation with Tim Phillips and the award winning author and Columbian lawyer and activist Oscar Guardiola-Rivera.

Madeleine Habib, the first female boat Captain of Médecins Sans Frontièrs rescue boat Dignity 1, will recount her experiences in the Mediterranean as a human rights activist, while the anti-trafficking advocate Minh Dang will explore the psychological impact of modern slavery.

Hanna Rose Thomas will curate an exhibition of self-portraits created by Yezidi women who had escaped from ISIS, while other sessions will include the UN Special Envoys to Yemen and Somalia and the Head of Office for the UN Special Envoy for Syria, who will explore the possibility of peace in nations riven by seemingly intractable conflicts.

“The purpose of the festival is to promote Scotland in the world and the world in Scotland.” Beyond Borders International Festival executive director Mark Muller Stuart

The Scottish journalist and writer Magnus Linklater will also be in attendance, reviewing figures from Enlightenment Scottish history onwards and celebrating “politicians, artists, inventors, explorers, soldiers, academics, philosophers and troublemakers – men and women who broke the mould of their time.”

In celebration of the 100th anniversary of his birth, SOWhErTO Africa will also pay tribute to Nelson Mandela and other South African legends with a mixture of poetry, street music and dance from Sotho, Zulu, Sbujwa and Pantsula.

The chaos of Brexit, the Trump administration and worsening relations with Russia will be debated in one of the festival’s main events, with Plame joined by Former International President of Médecins Sans Frontières Unni Karunakara and SNP economic advisor Andrew Wilson.

Highlighting BB18’s aims, the festival’s executive director Mark Muller Stuart commented: “The purpose of the festival is to promote Scotland in the world and the world in Scotland. It’s a place for people who have like-minded ideas to come together and discuss them in a tranquil and neutral environment.”

For tickets to the Beyond Borders International Festival, visit www.beyondbordersscotland.com